You are here: Home / Mystery/Suspense/Thriller Series / Foliage by Lorraine Evanoff 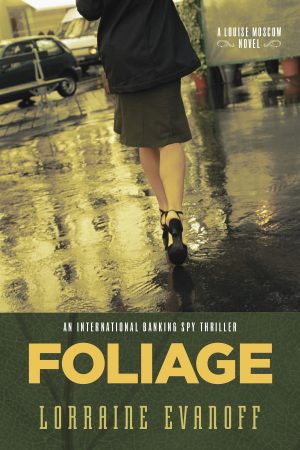 How Did You Come up With Your Characters?
Based on a true story that was a precursor to the Panama Papers scandal, there was no shortage of fascinating characters. But to hold it all together, I also needed solid central characters, especially one uniting character, namely Louise Moscow.

Book Sample
He prayed silently as he approached the front door of the family home he no longer owned. As he opened it, feeling the unlatched door give way, he knew he had arrived too late. The sound of his wife weeping echoed in the other end of the house, and a single gunshot rang out. He ran to the back parlor, but a man in the doorway blocked his entry. His wife lay on the temple bed, naked, bruised; a single line of blood mixed with snot dripped from her nose. The worst had happened. She stared blankly at the smoke rising from the gun barrel pointed down at her dead brother-in-law.
The man stood motionless, gripping the briefcase full of cash, an utter failure. The gun now pointed in his direction as the killer-rapist walked toward him. The accomplice continued to restrain him with a raised finger. Young, barely twenty-five years old but wise in the ways of rape and murder, he tucked the gun into his jacket and slipped the briefcase from the man’s grip. He opened the case and eyeballed the amount of cash. He removed one bundle and handed it to his victim.
“Spend what you have left wisely, and don’t do anything else foolish.” The killer nodded to his cohort that they were leaving.
“You are from a good Pakistani family, a fellow Mohajir. There is nothing noble in what you are doing,” the man whimpered.
“And yet you are still alive.” The two thugs walked out and continued casually down the road, confident no one would pursue them.

Author Bio:
Lorraine Evanoff is a critically acclaimed author originally from Chicago. She studied and worked for seven years in Paris and is currently living in Los Angeles with her husband. A former finance executive in Silicon Valley and the entertainment industry, Lorraine's adventures include CFO positions at high tech companies during the dot-com era, and various production companies, notably as CFO of National Lampoon. She already has multiple film credits to her name and now has a screenplay in pre-production. She is a proud member of the Mystery Writers of America and Romance Writers of America.

Sign up for our newsletter to find out about great mystery books. Once a month one subscriber will win one book from our site.
Filed Under: Mystery/Suspense/Thriller Series Tagged With: action, adventure, Banking, Espionage, Finance, France, historical, romance, spy, thriller