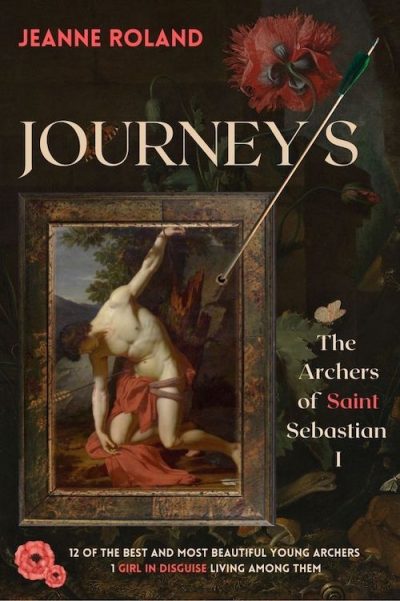 Journeys: the Archers of Saint Sebastian by Jeanne Roland

15-year-old Marieke disguises herself as a boy to hide in the all-male archers’ guild of Saint Sebastian to escape her father’s killers. Soon she’s determined to discover the truth about her father’s mysterious past at the guild, and to help the most charming young Journeyman archer in the place win the annual guild trials – without ever letting him discover her secrets. Robin Hood meets Princess Bride and Mulan in this historical adventure set in 14th-century Belgium and packed with romance, humor, intrigue, and of course, longbow archery trials.

END_OF_DOCUMENT_TOKEN_TO_BE_REPLACED

Spirit Ridge by L. A. Kelley

San Francisco in 1885 was a dangerous place for those who crossed Colin Doyle. To Nob Hill elite he was a successful businessman. To the underbelly of San Francisco he was The Mick, a criminal mastermind ruling from the shadows. If a buyer’s tastes ran to opium, a whore, or a politician, The Mick could name a price. No one who betrayed him ever escaped the city alive.

Nell Bishop is a fearless investigative reporter for the San Francisco Dispatch. She’s on the run to the Arizona Territory with the one witness who can expose Doyle’s corrupt empire and stop the plan to extend his evil dominion to the West.

Marshal Sam Tanner of Spirit Ridge in the Arizona Territory fought the visions sent by his Apache blood. They always foretold a death he couldn’t prevent. Then Sam dreamed of the coyote with golden brown eyes who warned of a black shadow spreading evil across the land. Did the message call him to help the beautiful woman who stepped off the stagecoach? Can Sam and Nell elude the mysterious dark riders who dog their trail or will the next vision mean death for both of them?

END_OF_DOCUMENT_TOKEN_TO_BE_REPLACED

“What if you were the one?”

With those words, Arabella España is lured into a tale of forbidden love and forgotten secrets. In the wake of a murder in 1950’s Puerto Rico, Nationalists revolt against American colonialism. An amnesiac recluse, married to a man she does not love, Arabella finds solace in the only remaining book in her possession. One of many banned by Puerto Rico’s Gag Law.

The mysterious novel entitled THE LAST LOVE LETTER by one Aurelio Valentino leads Arabella on a journey with the main character in search of his lost love. But as she delves deeper into the story, she makes a shocking discovery: the novel contains clues to finding the legendary Labyrinth of Love Letters. A place of love and myth linked to the letter stolen from the corpse of the man who had recently been killed.

As each page draws Aurelio and Arabella closer together, she anxiously searches for the love letter that will reveal the identity of Aurelio’s lost love. In her endeavor to find the Labyrinth, she discovers that the murder is a fate tied closely to her own destiny. Soon Arabella’s literary journey reveals memories of her forgotten past and she discovers what happens when the main character of the story falls in love with the reader.