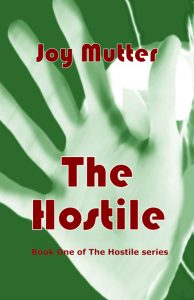 In a rundown area of Manchester, inside the bathroom of a terraced house overflowing with children and dysfunctional parents, a small but powerful entity befriends young Serena with disastrous results. This unlikely enigmatic force not only dramatically affects introverted Serena’s life but also threatens the well-being of everyone she knows, especially those people who’ve earned the strange girl’s displeasure. It soon becomes clear that nobody should ever upset Serena … if they know what’s good for them. After reading The Hostile, you’ll never look at D.I.Y. in the same way again.

The Hostile is a “refreshingly original” contemporary paranormal crime thriller. “A bizarrely captivating” read. It’s book one of The Hostile series and is available in Kindle, paperback, and audiobook editions. Each book in the series can be read as a standalone. Book two, Holiday for The Hostile, was published in December 2016. The third book in this unusual series, The Hostile Game, was published on Amazon in Kindle and paperback in April 2017. I’m currently writing book four, Confronting The Hostile.

Sign up for our newsletter to find out about great mystery books. Once a month one subscriber will win one book from our site.
Filed Under: Featured Books, Mystery/Suspense/Thriller Series Tagged With: audiobook, book series, crime, fiction, Joy Mutter, Kindle, paperback, paranormal, thriller