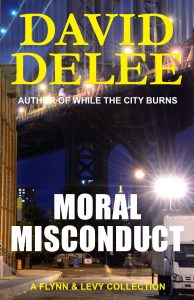 COP SHOT
On a cold, rainy, March night, NYPD homicide detective Frank Flynn catches the worst case there is: A cop shot under the Brooklyn Bridge. Forced to team-up with an Internal Affairs investigator, the two detectives must work together to sort through a plethora of suspects, all of whom have reasons for wanting the dirty cop dead, to determine who shot the cop–and why–while harboring secrets of their own.

RE-HOMED
Concerned by a parent’s behavior toward his adopted daughter, recently demoted NYPD Detective Christine Levy uncovers a murder that leads to the disappearance of a teenage girl and a manhunt for her physically abusive father.

But as Flynn and Levy dig deeper, the investigation strains their partnership and puts them in the cross-hairs of some very dangerous people. All while a racially-charged city holds its breath–and waits.

Sign up for our newsletter to find out about great mystery books. Once a month one subscriber will win one book from our site.
Filed Under: Crime Fiction, Featured Books Tagged With: crime fiction, crime thriller, david delee, mystery, police porcedural, suspense, thriller