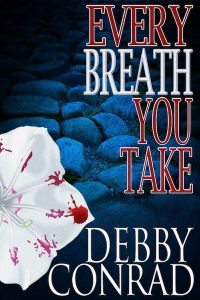 Hollin Pierce’s past comes back to haunt her when she returns to Whisper Lake, Pennsylvania. Trying to help her mother hang on to the home, which has been in their family for generations, is an uphill battle, and Hollin has no choice but to sell some of the surrounding land. But the only man interested in buying is Griffin Wells, the man who was convicted of raping Hollin thirteen years ago.

Griffin still maintains his innocence to this day, claiming he was framed. And as Hollin gets to know him again, the attraction and feelings she once had for him return as she slowly realizes she made a grave mistake. She sent the wrong man to prison.

She also realizes that if Griffin wasn’t the one who raped her when she was a teenager, then someone else did, and that someone is running around free. Now she can’t decide who to trust, and when her sister ends up murdered, Hollin knows it’s only a matter of time before someone comes after her.

Buy Every Breath You Take Here

Sign up for our newsletter to find out about great mystery books. Once a month one subscriber will win one book from our site.
Filed Under: Featured Books, Suspense Tagged With: Debby Conrad, mystery, romance, romantic suspense