You are here: Home / Mystery Books / On the Road to Death’s Door by M. J. Williams 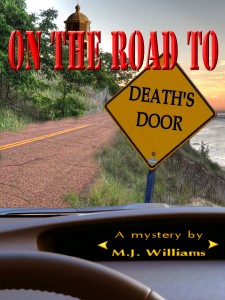 Emily and Stan Remington’s maiden voyage in their newly inherited, second-hand RV goes awry when a body falls off the top of their vehicle. The retired small town police officer and her husband, a retired history professor, find themselves at the center of a murder investigation involving a politician, a corporate executive, and a hippie priest. Emily butts heads with the local sheriff as their search takes them from a backwoods cabin in Wisconsin’s scenic Door County to the Bishop’s Chancery in Madison to an abandoned island in the infamous Death’s Door Straits.

What Inspired You to Write Your Book?
We (co-authors Peggy & Mary Joy) love to travel and we love mysteries. When we travel–together or separately–we are always wondering “what kind of trouble can our characters Emily and Stan get into here?”

How Did You Come up With Your Characters?
Emily is loosely based on several retired or former police officers we know–both women and men. And perhaps she’s the “we” we’d like to be. Stan was inspired by various academic colleagues. Sometimes the people they meet or whom we kill off are the doppelgangers of people we know or have met–with names, looks, and even genders changed as needed. We’ve even asked friends and loved ones, “Do you want to be killed or the one to discover the body in this book?” All in good fun, of course.

Book Sample
CHAPTER 1
The campground smelled vaguely of wood smoke and pine. Maple and birch leaves rustled softly, if unseen, against the mottled, star-spotted sky.
Emily Remington carried an armload of cut fire wood and dumped it next to a brick-lined pit in the ground. She looked up in time to see Stan and Malcolm clamber to the top of the ladder attached to the back of the RV. They looked like wraiths in the swaying light of the Coleman lantern Stan was carrying in one hand.
“Be careful up there, Hon!” Audrey shouted.
Malcolm waved her off. Stan grunted, more from the exertion of climbing over the lip of the ladder than from any kind of editorial statement.
The Winnebago was tucked into a copse of maple trees, and the two men had to duck to avoid being backhanded by a low-hanging branch. Malcolm pulled a handkerchief from his back pocket and swiped at his forehead. When he had tucked it back away again, he pulled a small bottle out of a front pocket. He offered it to Stan first. Stan grinned and accepted the drink. Standing on top of the huge vehicle, legs askance, he threw his head back and took a long slurp.
“Ahh!” He handed the bottle back to his friend,then surveyed the campsite from his new vantage point. Emily was busy arranging the dried logs into a teepee shape in the middle of the fire pit. Audrey bustled up behind her.
“This is so rustic!” Audrey exclaimed as she busied herself about the campsite, martini glass in hand. She picked up a lawn chair and swiped at it with a tissue while Emily, on her knees, blew at the growing licks of flame.
“One used carpet, ready to be delivered!” Stan announced.
The two women turned and watched as their men positioned themselves on either side of a six-foot long carpet roll. Emily grabbed her can of beer from the picnic table, enjoying the scene as if from a theatrical show.
“I still cannot believe you bought that thing at a garage sale,” Audrey chattered. She took another drink from her stemmed glass. “That is just sooo…quaint.”
“Man, this thing is heavy,” Stan complained. “What did you do, Em? Hide a body in it?”
The two men grunted and heaved but couldn’t get the carpet roll to move into a controlled position.
“How about we just shove it off?” Malcolm suggested.
“Sounds like a plan to me,” Stan said, breathing heavily. “Hey, ladies! Heads up! It’s raining carpeting. On three,” he directed.
Malcolm nodded, putting his weight behind the carpet.
“One, two, three!”
They shoved at the bundle and rolled it off the top of the RV…
“Oh, shit!”
…onto the awning…
“Damn!”
…which bent and ripped under its weight…
“Crap!”
…and fell to the ground with a THUD.
“Stan!” Emily shouted. “What are you doing?” She stared in dismay at the ripped awning with its bent support struts.
“I don’t know, Em,” Stan said, standing on the top of the Winnebago, hands on his hips, looking for all the world like king of the mountain. “If we gotta do this much work to get it down, what are we gonna do when it’s time to get it back up?”
“I think you need to work those arm muscles a bit more. The guys at the garage sale didn’t have any trouble getting it up there.”
Stan signaled Malcolm to climb down the ladder ahead of him. He rubbed his hands against the sudden chill of the evening, then clambered down himself, eager to stand in front of Emily’s already blazing fire.
“Okay, let’s roll this baby out and see what we’ve got.” He pulled out his pocket knife and cut the twine which bound the rug. He positioned a foot against one end of the roll and signaled Malcolm to do the same at the other end. “On my count again. One, two…”
With a dual grunt they pushed, hopped, pushed, hopped, unrolling the carpet one lump at a time. Finally Stan gave it one last mighty heave with his foot.
“What the–?”
They watched in horror as first an arm, and then a leg, and finally an entire body flopped out of the bundle. Stan, Emily, and Malcolm stared in stunned silence.
Audrey screamed.

Author Bio:
The writing team of M. J. Williams is comprised of sisters-in-law Peggy Joque Williams and Mary Joy Johnson (nee Williams). Peggy is an elementary school teacher and freelance writer. Having grown up in Michigan’s Upper Peninsula but eventually migrating to Madison, Wisconsin, she considers herself a “Yooper”-by-Birth and a “Cheesehead”-by-Choice. Mary Joy is a retired college professor who specialized in teaching writing. She is also a professional quilter and has had her work displayed in shows. She is currently the president of the Mad City Quilt Guild. Having lived in a variety of places, she spent her career years in Escanaba, Michigan (making her on honorary Yooper), and eventually retired to Madison, Wisconsin (making her a Cheesehead). Their “On the Road…” mystery series features Yooper RVers, Emily and Stan Remington.

Sign up for our newsletter to find out about great mystery books. Once a month one subscriber will win one book from our site.
Filed Under: Mystery Books Tagged With: Door County Wisconsin, mystery, RV travel, Wisconsin fiction, women sleuths