You are here: Home / Mystery/Suspense/Thriller Series / Fire on the Mountain; A Detective Mike Eiser Novel by Clabe Polk 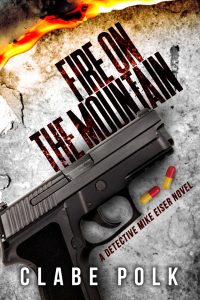 How Did You Come up With Your Characters?
The Detective Mike Eiser Series has a stable cast of characters that make up part of the town of Poplar Bluffs and whose lives flow through the series from book to book. The characters are real people; there are no superheros, no rich people; only members of a small town community and Mike Eiser's friends and neighbors. Each story stands alone and the antagonistic characters are developed to go with the individual stories, although the influences of a couple of them persist through more than one story.

Author Bio:
CLABE POLK is into a second career as a writer of fiction. He is the author of The Detective Mike Eiser Series, The Adventures of Harry Morgan Series, and the author of The Road to Armageddon, numerous short stories and flash fiction pieces.
A lifelong reader with a great variety of life experiences, Mr. Polk brings an avid interest in natural sciences and more than thirty-seven years of professional environmental protection program management and law enforcement experience to his writing.

He lives near Atlanta, Georgia with his wife, two daughters, and the family’s Cockapoo named Annie.

Sign up for our newsletter to find out about great mystery books. Once a month one subscriber will win one book from our site.
Filed Under: Mystery/Suspense/Thriller Series Tagged With: action, adventure, Clabe Polk, Conspiracy, dysfunctional families, investigation, murder, mystery, narcotics, trafficking