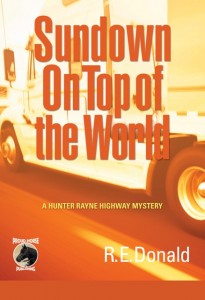 Former homicide investigator Hunter Rayne follows the white lines northward on the Alaska Highway, but a truck breakdown forces him to take an unscheduled stop in Whitehorse, Yukon, where he had been stationed as a rookie cop. While his Freightliner is awaiting repairs, Hunter takes a side trip to bush Alaska where a chance meeting with a young Alaskan woman reawakens his interest in a baffling cold case. A reclusive trapper and his young girlfriend disappeared from a bloody cabin 25 years before, leaving their sled dogs chained outside.

Memories of the past coupled with a recent murder find Hunter back in investigative mode with the blessings of Whitehorse RCMP boss Bartholomew Sam, son of a shaman and Hunter’s old friend. He finds himself searching the banks of the mighty Yukon River for a tough old bush woman who may hold the key to more than one bloody death. It’s a vivid reminder that the breathtaking beauty of the northern wilderness camouflages its brutal indifference to human life.

This is the fourth novel in the Highway Mysteries series of character-driven traditional mysteries in a uniquely North American setting.

Buy Sundown on Top of the World Here

Sign up for our newsletter to find out about great mystery books. Once a month one subscriber will win one book from our site.
Filed Under: Featured Books, Mystery/Suspense/Thriller Series Tagged With: Alaska, Canadian, crime fiction, mystery, R.E. Donald, RCMP, Yukon