You are here: Home / YA - Mystery / Britfield and the Lost Crown by C. R. Stewart 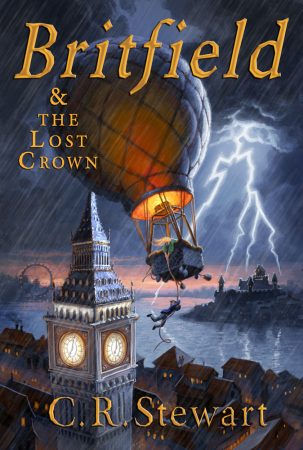 How Did You Come up With Your Characters?
Ten years ago, when I was living in New England, I was working for a company and was down at a weekend seminar. It became extremely boring, and I began to drift. I started doodling on a piece of paper. I simply drew a circle with three lines coming down to a basket and drew a boy and a girl inside. The working title was The Boy & the Balloon. From that moment, I connected with the idea of a boy, Tom, and a girl, Sarah, who were both orphans at a terrible orphanage up in northern England. They wanted to escape, but the only way to outmaneuver an illustrious detective and his police force, was to commandeer a hot air balloon. I thought what fun, traveling throughout England, free for the first time in years, and seeing everything there was to see. This is how it all started, ten years ago. It took me 4 years and 2500 hours to finish Britfield & the Lost Crown.

Book Sample
A strong breeze shot across the sky as Sarah and Tom followed the pack of balloons over
Oxfordshire. Known as the Thames Valley, this lush countryside was a multicolored
patchwork of square farmlands crisscrossed by hedgerows and rock walls. The Thames
River gracefully snaked through the open fields covered with extravagant mansions built
centuries ago. Although most of the balloons headed toward Canterbury, some floated off
in opposite directions. By mid-afternoon, most of them had vanished. Tom and Sarah
followed behind a few but soon lost them in the hazy clouds. Every so often, Tom gave
the balloon a long blast of hot air to maintain its altitude. While they drifted southeast
toward London, their main concern was Gowerstone. Peering through the binoculars,
Tom searched for the helicopter.
“I don’t see him.”
“Do you think he gave up?”
“No,” he replied quickly. “He’ll never give up.”
“We seem safe for now.”
“For the moment,” he added with caution.
As Sarah admired the scenery, Tom reached into his pocket to retrieve her locket.
“This really does bring me luck,” he concluded, handing it to her. “Thanks for letting me
borrow it.”
“It’s yours, silly,” she smiled, pushing it back. “Just promise you’ll always keep it with
you.”
“But —”
“Promise.”
“All right . . . it’s a deal.” Stuffing it back in his pocket, he felt the piece of paper Patrick
gave him and removed it.
“What’s that?” she inquired curiously.
“Before we left, Patrick broke into the Grievouses’ office and looked through my file. He
wrote something down.”
“Let’s see.”
Tom opened it. Scribbled across the page was just one word.
“Hmm,” he grunted, expecting detailed information.
“What does it say?” she demanded.
“Britfield.”
“Britfield? What the heck does that mean?”
“How am I supposed to know?”
“There must be more.” She snatched the paper from his hand and thoroughly examined
both sides. Dissatisfied, she shook her head. “So Patrick breaks into the office, sneaks
your file out, and writes only one word on it — is he mad?”
“I’m sure he was in a hurry,” his voice deepened, “given that we were planning to rescue
you and everything.”
“Then it’s a clue?”
“It’s a name.”
“Maybe it’s your last name,” she suggested encouragingly.
This comment caught Tom off guard. After all these years of having only a first name, it
was a lot to digest and felt rather strange.
“Maybe,” he shrugged, not sure what to think.

“Britfield & The Lost Crown was conceived as an idea over 10 years ago while I was enduring a boring finance seminar. It started as a sketch of a hot air balloon with a young boy and girl trapped inside. From this simple drawing sprang the entire concept and story for Britfield.”

C.R. Stewart received a Bachelor of Arts in British Literature and European History from Brown University; did post- graduate work at Harvard University; earned an MBA from Boston College; and is pursuing a Master of Science in Advanced Management and a PhD in Strategy.

Now based in San Diego, C.R. Stewart is a strong supporter of education and the arts. He enjoys world travel, reading, riding, swimming, sailing, tennis, and is currently on a National School Book Tour with Britfield & The Lost Crown speaking to students on the importance of creativity!

Sign up for our newsletter to find out about great mystery books. Once a month one subscriber will win one book from our site.
Filed Under: YA - Mystery Tagged With: adventure, England, Family Freindship, Intrique, Middle Grade, mystery, Preteens, suspense, Tweens