You are here: Home / Bargain Books Under $3 / Boxes For Beds by Maryann Miller 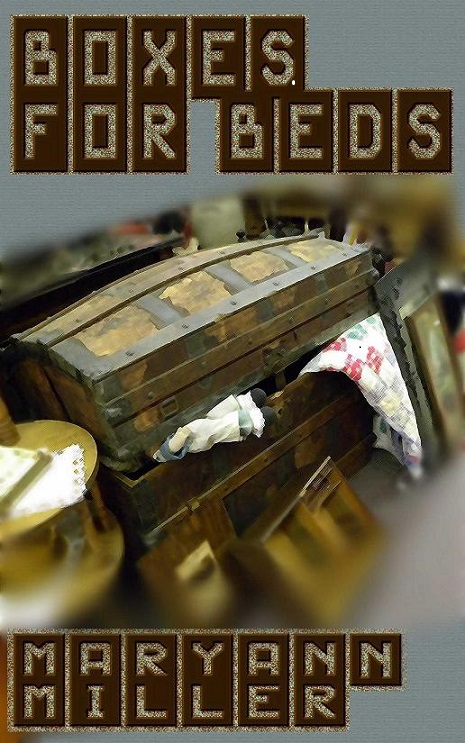 Boxes For Beds by Maryann Miller

In 1961 the mob still ruled Hot Springs, Arkansas and had Sheriff Bates under their thumb. When babies are being kidnapped in nearby Pine Hollow, Bates has to put this case to bed before the bosses come down from Chicago. They don’t need the heat of a major investigation that could involve the feds.

Who is taking the babies? Is the current case connected to the disappearance of babies 25 years ago?

In a desperate move to solve the case before the FBI has to be called in, Bates decides to arrest Leslie Richards, the new woman in town, even though there is only thin circumstantial evidence against her. Better for it to be a stranger taking those babies and not one of their own.

Leslie has left New York with her ten-year-old daughter, Mandy, hoping to escape from the secrets of her past and the ruins of a relationship, only to discover that there is little peace for her in Pine Hollow, Arkansas.

What Inspired You to Write Your Book?
When I read a newspaper article about an incident that happened near Hot Springs, AK, I was intrigued. An elderly woman had died, leaving no family, and when authorities went into her old farm house they found skeletons in her attic. Nobody in the small community had any idea where those babies had come from or why they had been hidden away in old trunks in her attic.

Always intrigued by a mystery, my writer's brain took over and started asking, and trying to answer, the questions of how those babies had ended up lost and forgotten. Were they children of the woman from liaisons when she was young? Or had other young women given birth in that remote farm house and left their babies in the care of that woman? How had the babies died? Did the woman kill them and then hide them away?

I spent almost a year mapping out my fictional answers to those questions, as well as doing all the research into what life was like in the 60s in Arkansas, especially Hot Springs. But figuring out a plot is half the fun of writing a book, or in some cases most of the fun. I did have to go to Hot Springs and visit one of the bath houses. It was all for research, you know.

How Did You Come up With Your Characters?
The unnamed character that readers meet first actually just came to me when I sat down to start writing the story. I had not planned to get into this woman's head until she started talking to me, but it soon became clear that having her speak throughout the story was a good way to increase reader interest. Who is this person? Which is the question that drew me to the story in the first place.

Leslie is drawn a bit from my background as a writer, as well as my experience as an unwed mother in the 60s. I needed a reason for her to leave New York, as well as creating some mystery about her background to arouse suspicion when babies are being kidnapped in the small town in Arkansas where she has moved with a young daughter and no husband.

Sheriff Bates come purely from my imagination as I thought about what a spineless lawman would be like who looked the other way when Mob-related crime took place. I did extensive research at the Gangster Museum in Hot Springs where I found out that the Mob controlled most of Hot Springs, including the horse-racing track and the bath houses.

I had not planned to feature the deputy, Gus, as much as he was in the story. At first, I just wanted another law officer, but Gus started pushing more and more for inclusion. Characters do that sometimes and can almost take over a story. But I really liked Gus and his efforts to do the right thing, so I let him have a bigger role in the story. As it turns out, that was a good decision as the contrast between him and Bates has been something readers have enjoyed.

Book Sample
January 1936
"Hush little baby, don't you cry … " The plaintive melody whispered in the otherwise resounding silence.
One small candle flickered atop the dust-¬encrusted chest of drawers, the feeble light unable to dispel the gloom born of the murky darkness. The yellow flame wafted in a sudden draft, casting macabre patterns on a precarious stack of old boxes supported by an intricate network of cobwebs. The pale light briefly touched a figure hunched over an open trunk.
The figure loomed more like a shadow than a real person and reached out a hand to lightly trace the features of the tiny bundle nestled within the trunk's musty interior.
"Would you listen to me? Singing to a doll-baby just like you was real."
Wide, unblinking eyes stared back.
"Sometimes I wish … but no. It's better this way. If you was real, then I'd have to tell you to hush for sure. The Man don't let me play with no real babies. Says I might hurt 'em. But he don't know. I can be real gentle. Ain't my fault those others broke. You ain't gonna do that are you?"
Silence.

Sign up for our newsletter to find out about great mystery books. Once a month one subscriber will win one book from our site.
Filed Under: Bargain Books Under $3, Buyer's Guides, Fiction Audio Books, Heat Level 2 - PG, Mystery/Suspense, Print Books Tagged With: Chicago Mob, fiction, historical, Hot Springs, kidnapping, Maryann Miller, mystery, suspense