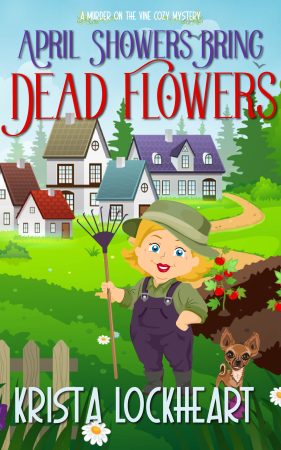 A powerful new cozy mystery series from award-winning and bestselling author Krista Lockheart. Join greenhouse expert Heather Moore and her sassy chihuahua as they uncover something unexpected in her new estate garden in this buzz-worthy fresh novel.

Greenhouse expert and horticulture Professor Heather Moore gets a new lease on life when she inherits her grandparents’ estate in New England. But the garden she loved as a child has seen better days. Determined to restore her grandfather’s garden to its former beauty, she’s accompanied by Ant, her charming chihuahua, and two of her favorite former students.

But wait, what? Ant suddenly digs up an even bigger challenge when he finds some human remains buried in an old potting shed. As she discovers clues and follows the evidence, a few suspects cross her mind, but ultimately they point to one wily and clever killer. Suddenly in danger herself, can Heather solve this puzzling mystery, restore her family’s legacy, and bring about justice?

April Showers Bring Dead Flowers is the first novel in the Murder on the Vine series. Join Heather and Ant as they explore the seedy underworld of gardens, greenhouses, and flower shops in this ‘unputdownable’ murder mystery!
Extremely funny, with a fast-paced plot and appealing characters, this adorable and ingenious story will embed itself in your heart and grow into one of your favorite reads.
Perfect for chick-lit fans and with a dash of sweet romance as well, this will appeal and be highly accessible to many readers.
Don’t miss this breakout novel in the cozy genre and pick up a copy today!

What Inspired You to Write Your Book?
Krista Lockheart has a passion for humor and cozy mysteries. Her first book earned seven book awards, including a First Place from the BookFest in humorous. She loves making readers laugh with her zany characters, witty dialog, puns and wall-to-wall humor. Krista also has a passion for botany, horticulture and plants, and uses the setting of a magnificent greenhouse and gardens as the backdrop to a charming cozy mystery. She hopes the plant and food description will inspire readers to go to farmer's markets, nurseries and the produce department of their local stores and investigate new plants and foods to enjoy.

How Did You Come up With Your Characters?
This book is loosely based on her first book. Heather Moore, the main character in this book, was one of readers' favorites from her debut novel, and so Krista thought to give Heather her own book. A super sweet romance develops between her and fellow plant specialist, Lars Oslo. Lars came about because I wanted Heather to have a romance with a very special man who would understand her and bring her out of her shell. There is a really sweet younger couple, Holly and William, who are the stars of the first book. Here they support Heather in all ways and are integral to helping her get established in her new home. Her favorite thing in the world is her little sassy chihuahua, Ant. He is her confidant and best friend. I wanted Heather to have a dog that she could pour her love out too, as she is getting ready to climb out of her shell and pursue romantic love with Lars. Heather has the best of all worlds in her friendships with Holly and William, her companion Ant, and her boyfriend Lars.

Author Bio:
Award-winning author Krista Lockheart writes irresistible cozy mysteries filled with humor, and buzz worthy characters and plots. Her favorite activity is interacting with her readers from all over the world, and she enjoys their feedback and comments on her social media platforms. She loves good food, good conversation, and good books! Cooking is a passion and she especially enjoys making pasta with vegetables. Chocolate, avocado, and seafood are her favorite foods to celebrate with. She loves being out in the sunshine and at the beach.

Krista comes from an artistic background and her art workshops sell out within a few hours of signup. Her work has earned cultural council grants and has been featured in newspapers, magazines, and on TV and on the radio.

In the past few months, her memoir, travel travels, and short stories were published three times in the Writer & Readers’ Magazine, and her travel tale about her expedition to Peru was the editorial feature in DRIFT Travel magazine.

She contributed a short story to a Halloween anthology and her debut novel was #1 in 12 categories on Amazon during its initial release (including in the Free Kindle Store and in New release categories).