You are here: Home / Crime Fiction / The Monster of Silver Creek by Belinda G. Buchanan 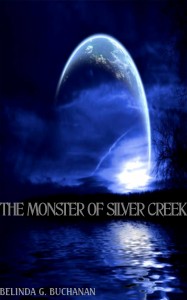 How Did You Come up With Your Characters?
I adore tall, dark, and handsome-mixed with brooding. Police Chief Nathan Sommers is the central character who is grieving over the loss of his wife. Her death, he feels, is on his hands and he is mired in guilt.

Nathan isn’t perfect, but even heroes have a chink in their armor. It’s what makes them human, and adds a certain vulnerability to them.

Book Sample
It was well after nine by the time Nathan finally arrived home that evening. He flipped on the light by the door and sat down in his brown leather recliner as the living room illuminated. He pressed his shoulders into its worn cushion and closed his eyes, trying to shut out the day. But Missy Rosenberg’s face, as well as the cries from her mother, still lingered in his mind, making it impossible to do so.

A bitter sigh fell from his lips as his eyes snapped open. During his years spent as a homicide detective, he’d always felt that it was his job to bring justice for the dead. Putting the killer behind bars gave him a sense of satisfaction that he was bringing closure to their loved ones. Over the last few weeks however, he’d slowly begun to realize just how wrong he was. For when darkness fell at the end of the day, those that had fallen prey to evil would still be dead…and their families would still be grieving for them.

He slowly sat forward and leaned over to untie his work boots. As he did, his wedding picture caught his eye, just like it had every night for the past two years. He kicked off his boots and picked up the silver frame.

He let his fingers trace over Jenny’s face, all the while wishing he could feel her skin. There were times that he could almost capture it. It was always there, but just out of his reach.

Nathan’s emotions began to churn, causing him to set the frame down. Wanting to avoid the impending tears, he quickly moved his attention to the case files in his lap.

One by one, he opened up the folders and laid them out meticulously on the coffee table in front of him. His eyes were immediately drawn to the first victim. Carol Fuqua was a bank teller who had worked right across the street from the station house. Well-known and well-liked, her death had sent shockwaves of terror across this close-knit community.

He began sifting through the photos that had been taken at the crime scene, hoping to find something that he’d missed. The images he’d come to know by heart reflected back at him, yet revealed nothing new. By the time he got to the last picture, his jaw had grown rigid. Carol’s hands had been bound behind her so tightly that the duct tape had left deep lacerations in her wrists.

No longer wishing to view them, he flipped the photos over and concentrated on reading through his notes. Her father had placed a frantic call to the police when she hadn’t come home from work the night of May eleventh. While a routine search had turned up nothing, the next afternoon Carol’s car had been found on a rural road near Graves Landing. The keys were still in the ignition, but they, along with the rest of the vehicle, had been wiped clean of fingerprints. Two days later, a fisherman had found her body in some tall brush by the water’s edge.

Nathan had spent the next few days interviewing everyone that knew Carol on a personal level, and even though they were all as shocked as he was to learn of her violent death, none of them seemed to know anything. The information her father had provided was vague. He thought she had a prepaid cell phone but a search of her car hadn’t turned one up.

He solemnly closed the file and rubbed the back of his neck before moving on to the next one. As the minutes ticked away, the frustration inside of him began to grow. Four women, all of them young and pretty, had been found murdered around the lake, but the similarities stopped after that. Carol was a local, while the others were from neighboring counties. Their hair types weren’t even the same.

The killer had left no fingerprints, no hairs, no fibers—no clues of any kind behind. And the murder weapon itself was just as perplexing. It caused two small wounds over the heart, sometimes rupturing the aorta, but always puncturing it. The openings were relatively small in diameter, and evenly spaced three inches apart.

He studied the photo of the stone that had been found inside the mouth of the third victim, a twenty-eight-year-old teacher from Wibaux County. Dr. Jensen confirmed that it had been placed there post-mortem. This was the same conclusion on all the women. The rocks were small, round, and smooth to the touch. Unfortunately, there wasn’t anything unique about them as they could be found anywhere along the shoreline.

The minutes turned into hours for Nathan, and it was after midnight before he fell into bed. But even as darkness surrounded him, he found that his mind was still processing the cases, refusing to let him sleep. There were so many unanswered questions. Was the killer a local, or just passing through? Did he like to stand around and watch the police? Had he been watching them this morning?

He slipped his hands behind his head and stared at the ceiling fan as it slowly turned above him. He wished that he had at least one piece of concrete evidence. Just something that would point him in the right direction.

After a moment, he turned over on his side and forced his eyes to close. His hand instinctively moved along the mattress in search of Jenny. She, of course, wasn’t there, nor would she ever be there again. His throat began to ache as her loss washed over him again for the thousandth time.

Author Bio:
I am an author of edgy, women’s fiction, and mystery romance. Hailing from the bluegrass state of Kentucky, I currently reside there with my husband, two sons, and a menagerie of animals that includes, two persnickety cats, one hamster, and one dog that thinks he’s a person.

Sign up for our newsletter to find out about great mystery books. Once a month one subscriber will win one book from our site.
Filed Under: Crime Fiction Tagged With: beach, Belinda G. Buchanan, cozy mystery, crime fiction, murder in a small town, Mystery Thriller, police officer, romantic suspense, serial killer