You are here: Home / Mystery Books / The Key to Murder by Jen Pitts 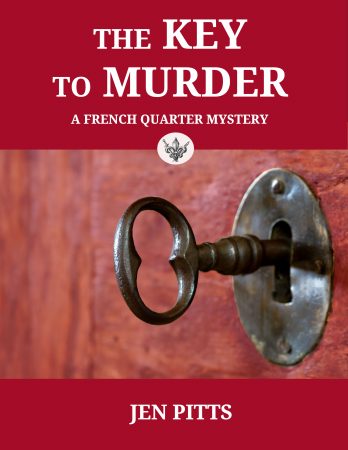 Samantha thought following a mysterious diary around the French Quarter of New Orleans would be a harmless way to learn about her new hometown until it became about murder.

As the newest resident of Thibodeaux Mansion, West Coast transplant Samantha is looking forward to starting her thirties in a new place. Drawn to New Orleans for its music, food and history, she’s excited to start her future in this unique city. But Samantha is also hopeful she’ll find her past since she was adopted from Louisiana after being orphaned in a hurricane as a toddler.

An anonymous diary, unusual key, and a distinctive doll are left in her furnished apartment and her mostly friendly neighbors all deny leaving the gifts. Samantha, now Sammy to her new friends, can’t believe any of them could be a liar. When the diary leads her to a dead body, Sammy needs to find out what these clues mean and what the murderer is trying to tell her.

Although her best friends Sissy and Andrew are happy to help her with this mystery, her other friends aren’t sure the murder and diary are about Sammy. Not wanting to lose her newfound friendships and possible love interest, Sammy decides she must uncover the answers on her own.

Sammy moved to New Orleans looking for a new future, but is it her past that found her first?

The Key to Murder is the first book in the The French Quarter Mysteries featuring West Coast transplant Samantha Richardson settling into her new hometown, New Orleans. Her neighborhood is full of music, food and history as well as interesting people. Join Sammy as she explores the Big Easy by solving the mysteries of the past and present in this new modern, cozy mystery series.

What Inspired You to Write Your Book?
I love mysteries and New Orleans, but I couldn't find enough books like that to keep me happy. Toni Morrison said, "“If there's a book that you want to read, but it hasn't been written yet, then you must write it.” I took that to heart and starting writing my French Quarter Mystery Series.

How Did You Come up With Your Characters?
I write characters I would love to know in real life. Also, the characters are parts of people I know, love, and sometimes dislike.

Book Sample
“Here’s your key, Sammy. You’re officially one of us, darlin’!”
My life in New Orleans started off with those words. Short, sweet, and full of unending positivity, Elizabeth Tyler, Libby for short, handed me the key to my new home in Thibodeaux Mansion, a former single-family home. This French Quarter building held seven apartments of which Number Four was now mine.
“She means you’re one of us in the building. It will take decades before you’re considered a resident of the city,” her husband said, which fit his demeanor and physical presence. William was tall to Libby’s shortness, gruff to her sweetness, and practical to his wife’s often impractical nature.
“William! Don’t scare her off already,” Libby swatted her husband’s arm as she pulled him toward the door. “Now remember we’re in Number Two. I think I’ve put everything in here that you’ll need, but ask me for anything else. We’ll see you later.”
Exhausted from traveling and a bit overwhelmed that I was here, I flopped on the loveseat. “Thirty is the new twenty,” my best friend, Madeline Collins, insisted when I complained on my birthday that my life wasn’t going anywhere. With no real career, no boyfriend, and no strong ties to the area, I needed to make a drastic change if I wanted a different life. After the third martini we made a plan for me to move from San Francisco to New Orleans.
“New Orleans?” Madeline said after finishing her martini. “I thought you’d pick Los Angeles, something closer to me.”
“You know why,” I said while waving off another drink from the bartender.
“Of course, your parents, but they weren’t from there.”
“No, they grew up in Baton Rouge, but New Orleans is more my kind of place.”
Madeline didn’t argue with me as she knew of my obsession with all things New Orleans. From the history, music, food, and culture, I read, listened, and devoured anything related to the city. Although my parents adopted me in Louisiana, we never visited as much as I begged them. Now that it had been over a year since their deaths, my grief and loyalty wasn’t holding me back from my dreams of living in New Orleans.
And that’s how I ended up in this furnished apartment in the French Quarter.
I let out a sigh of relief as I looked around my living room. It was only my second time here. I chose this place, or rather it picked me, on my weekend trip to find a new home. I flew in on a Friday and meandered the streets until I found Libby’s shop, Artistic Coffee & Creations, on a Saturday. An hour of chatting and two cafe au laits later, I followed Libby here. I said yes even before I entered the apartment.
Thibodeaux Mansion was quintessential French Quarter with its wrought-iron balconies and dark green shutters decorating the bright coral home. A few steps through the old carriage entrance and I was enchanted. The slate pathway led the whole length of the main building and the former slave quarters to a lush garden. Halfway to the back of the courtyard was the door to my apartment, one of four, inside former slave quarters. My door opened to a small living room with a faded, but comfortable loveseat, and a scuffed wooden coffee table.
Books filled the shelves while New Orleans themed artwork lined the red brick walls. To the left of the living room was a galley kitchen, which was plenty big for me, the incompetent cook. Walking through the kitchen, I entered the cozy bedroom with a classic four poster bed, nightstand, and dresser. The small, but quaint bathroom finished my new home. My deposit check and a warm embrace sealed the deal with Libby.

Author Bio:
Jen Pitts is a lifelong mystery reader who turned her obsession into writing cozy mysteries of her own. When she isn't plotting fictional murder and mayhem, she's chugging coffee, traveling, reading, and enjoying life with her children and husband in the Pacific Northwest.

Sign up for our newsletter to find out about great mystery books. Once a month one subscriber will win one book from our site.
Filed Under: Mystery Books Tagged With: bookseries, cozymystery, frenchquarte, jenpitts, mystery, neworleans, r mysteryseries