You are here: Home / Mystery/Suspense/Thriller Series / The Grifter’s Daughter by Duane Lindsay 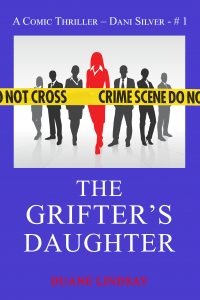 After conning her fiancé out of 1.2 million dollars, she’s hoping he’ll come after her.

Dani is going to set up the first self-financed long cons. With old members of Leroy’s gang, and new members of her own, Dani’s out to pull of some of the most outrageous crimes ever.

Dani starts the new business by taking down a crooked televangelist. Unfortunately, he’s not crooked and the plan goes off the rails. Can she keep her crew together long enough to find another mark?

What Inspired You to Write Your Book?
Think “The Sting” or “Ocean’s Eleven” or the British television series “Hustle” and you’ve got the idea.

Why con artists? Because a con man (short for confidence man) will do or say anything. Imagine having the freedom to quit your job, sell everything and move to Tahiti, make up a resume that says you’re a reporter or a lawyer or an airline pilot—and go out and get the job.

How Did You Come up With Your Characters?
My characters aren’t secret agents or trained ex-Navy Seals, there isn’t a lot of violence or sex. There are a lot of puns and odd similes and the desire to take the reader where they’ve never been before.

“Don’t this thing have air?”
I glanced at the bony little man complaining; my father, Leroy, “Pops” Amadeus Logan. He was slouched in the black bucket seat of my brand new old Ford, arms hugging his chest.
A 1965 fully restored Mustang convertible, fire engine red with leather interior, chrome dash, three speed manual with overdrive, you could get a speeding ticket parked at the courthouse. They just didn’t make a better getaway car.
“Quit your bitchin’, Pops. This here’s the open road.” I chinned to the highway through the windshield. “And that there’s freedom.”
“Damned hot, this freedom.” He broke out the smile that had charmed so many wardens, twisted around to touch one of the large cases in the back, caressing the smooth mocha leather. “One point one million dollars. I never had a score like that my whole life.”
“Neither have I, Pops,” I said, trying to keep the giddy elation from my voice. Honestly, if we weren’t driving I’d be dancing in the street.
The scenery outside whizzed past, barely noticed. Fields of seed rows waiting for spring to become green again, blue sky above, gray ribbon of the Ohio Turnpike in front and back.
The temperature had reached eighty and we weren’t even past nine in the morning, hence my father’s complaints.
On the lam, five hours out of New York City, heading nowhere, the sun rising behind us cast a giant shadow to the west. We drove after the shadow as if it was a destination we could never reach, like Moses near the Promised Land only, you know, crooked.
I felt a sudden rare fondness for my father. “I couldn’t have done it without you,” I told him.
“This is very true.” Pops said and my feelings shifted immediately back to annoyance. Pops could make me angry faster than anybody, I guess that’s what fathers are for. I tried again.
“Keeping Alexander from killing Nick and selling those phony blackmail photos to Richard…breaking in and taking the money. Oh, and being dead. Pops, you make a great corpse.”
“A lot of people would agree.” Leroy looked falsely modest. In my experience, he had never felt truly humble. He was simply the best con man still living – and he knew it.
“Even more would help it along.”
I hadn’t seen much of my father for a long time. Scamming this money represented our first real bonding in twenty years. Together we had just pulled off a major league long con –like a father/daughter science project – and the money was our reward.
With the dawn painting the sky with gentle pastels there came a surge of hope and confidence. I was beginning a new life.
“What about Nick?” asked Pops, after we passed a semi loaded with cattle. The odor wafted over us, making our eyes water.
“What about him?” Sore subject, this. I’d literally left Nick at the altar, agreeing to marry him, then sneaking off in the middle of the night with a briefcase full of his money. I felt bad about it but what can I say? I am my father’s daughter. I was pretty sure Nick would have strong feelings about it, though.
“He’s a smart one, Dani. You sure you did the right thing leaving him?”
“No,” I said, but the sound was lost in the wind from all the freedom blowing over us.
A lot of miles later at a truck stop that served thick black coffee, Pops asked, “You think he’s gonna look for you?”
“I’m counting on it Pops.” I spooned sugar into a white coffee mug. “I am surely counting on it.”

Author Bio:
I wrote my first novel in college at the University of Wyoming, played lead guitar in Pinky’s bar as a member of “Suzy Q and the Quad City Ramblers,” Got an English degree, then an engineering degree, worked a lot, got married to Traci (probably the best thing to ever happen), wrote several books with Raymond Dean White, retired recently from said engineering and started writing again.
Now I write cheerfully demented novels about con artists and overweight PIs, play guitar a lot (on a very well used and loved 1954 Martin D-18 (for those of you who have guitar lust—centerfold picture available on request) and generally am having the best retirement ever.

Sign up for our newsletter to find out about great mystery books. Once a month one subscriber will win one book from our site.
Filed Under: Mystery/Suspense/Thriller Series Tagged With: Comedic Mystery, Con Artist, Duane Lindsay, Historic Mystery, mystery