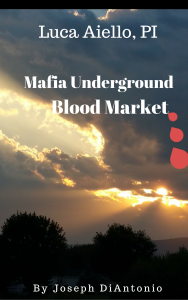 This is an EXCITING, PULSE THRILLING story about a deadly virus found in the blood supply – specifically in the black market blood sold by organized crime. Professor Emilio Costa discovers a genetically modified virus and calls upon his friend, Luca Aiello, a retired New York City Police Lieutenant who is now a private investigator, to find out who is behind the sinister plot. Professor Costa realizes that this virus, if it gets into the world’s blood supply, will have catastrophic consequences for the world. This could unleash the deadliest plague to ever decimate humanity. So, who created the virus? Why did they do it? How is the Mafia involved? Yes, who is the sinister, evil group behind this deadly plague? Check the surprise ending.

What Inspired You to Write Your Book?
I was born in the south. South Brooklyn. During my youth, I was raised in an American Italian neighborhood filled with rich culture and vivid characters that have influenced my writing. I hope this brings enjoyment to you, the readers, as the characters of my books are based on these real-life people with whom I grew up with.

How Did You Come up With Your Characters?
Dr Emilio Costa is the character that represents the real doctor that went threw this story. Bloodless surgery is the upcoming medical norm. The medical industry found that the bloodless surgery patients heal faster and have less complications. This illegal blood industry must be stooped.

"No. Noo. Noooo. It can't be,” I cried as the policeman told me I needed to come over right away. He said my best friend was dead and that he’d gotten my name and phone number from a note in his pocket.
I ran out of my hotel as fast as I could. It was only three blocks to Emilio’s house. A misty rain made it a dreary morning.
As I ran, the sound of my feet hitting the wet pavement echoed in my ears and sent a shiver through me. I made it to Emilio's house and ran up the stairs two at a time.
A policeman answered the door. I could hear Luciano Pavarotti singing Tosca in the background.
"I'm Luca, Luca Aiello," I cried out. "What happened here? Who are you and what are you doing here?"
"My name is Captain Carlo Beneuti," he answered, standing at attention. "I'm with the Carabinieri State police."
"This is the house of my friend Dr. Emilio Costa,” I yelled. “What’s going on here?"
"Your friend Dr. Emilio Costa is dead."

"Dead?" I asked, shocked. "Getouttahere!"
"Your friend Dr. Costa has committed suicide."
"What do you mean he committed suicide? I don’t believe it," I screamed. "You must be crazy. He would never do such a thing."
"He was distraught over this Mafia black market blood ring he was involved in,” said Captain Beneuti. “That's why he took his life."
"Where is he? I want to see him."
"You can't. He’s in the morgue. They are doing an autopsy now. He killed himself by sticking a knife in his heart."
"That doesn't seem possible. How could he stick a knife in his own heart?"
"Why does it seem impossible? He’s a doctor and knows anatomy. He would know exactly where to place the knife into the chest to hit the heart with a lethal blow. Besides, no one was seen entering or leaving the house. So, it had to be suicide. Tell me, please—why would the doctor have your name and phone number in his pocket? Are you involved with him with this Mafia black market blood ring?"
"I am a friend of the doctor. I’ve known him since we were kids in Brooklyn."
"Brooklyn, New York? I heard that is where the Mafia has their home base."
"Yes, New York. But I have nothing to do with the Mafia. He asked me to come to Bologna to listen to him give a lecture at the University of Bologna. I just can’t believe he committed suicide."

"Since you are such a friend of his, what do you know about the tainted blood he was working on?"
"Not too much. All I know is he was very upset over it."
"What do you mean upset?"
"Well, he said people got very sick and he worried over it. He was concerned about his profession."
"Just what was his profession?"
"Dr. Costa was a medical doctor and a Professor of Blood and Marrow Transplantation. He was also a renowned international blood banker here in Italy."
"So, what about the tainted blood? Did he sell any of it?"
"No, he didn't. I told you he was concerned about it. He worried about his clients. He asked me to come to Bologna because I’m a retired New York City policeman who is now a private investigator. He thought I could help him clear up this issue of the tainted blood. That's why I am here now. I still don't believe he committed suicide. I think he was murdered. I know he had nothing to do with the Mafia nor the tainted blood."
"Why are you yelling at me?” He tilted his head. “I’m not the bad guy here."
"Nether am I. You are trying to make me the bad guy. But I’m not."
He pointed to a metal chair. "Ah siediti. Have a seat."
He took out a picture and asked, “Where did you take this picture?”

“I don’t know. It could have been any place. It probably was at the lecture in the University of Bologna. As I said, I don’t know.”
“The guy with you is a Mafia Don.”
“How do you know that? Who took the picture?”
“It was one of my moles. It was taken at the University of Bologna.”
“That’s what I said. What’s going on here? What are you trying to do? That must have been when Dr. Costa was giving his lecture.”
“Why would you take a picture with someone you’d never seen before?”
“I told you, I never saw him before.”
“OK. You can go. Just make sure that you don’t leave Italy until I tell you that you can. Capisci? Understand?”
“Capsica. I understand. Ciao.”