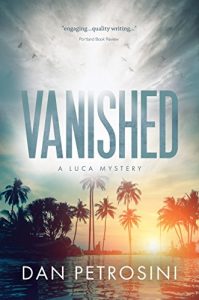 Obsession can be deadly.
That’s what Dom Stewart discovers when his buddy, Phil, goes missing. Dom has long coveted Robin, Phil’s beautiful wife, … is it time for him to step in?
Detective Luca is also dazzled by Robin; even while acknowledging she may be involved in Phil’s disappearance. Luca struggles with his heart as the investigation reveals the case is about much more than a missing man. Something dark and disturbing is behind the scenes. Is there a murder here?
As fraud and romantic interests verging on pathological fixation emerge, the question remains: what happened to Phil?

Sign up for our newsletter to find out about great mystery books. Once a month one subscriber will win one book from our site.
Filed Under: Crime Fiction, Featured Books Tagged With: crime, Dan Petrosini, detective, Luca Mystery