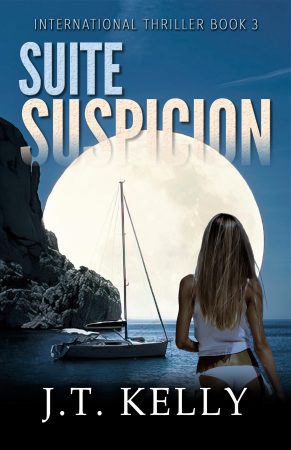 More insidious deeds are afoot in Suite Suspicion. If you crave heart-wrenching suspense and crime mystery, this third installment of the International Thriller series will keep you mesmerized with every twist and turn.

After the legal affairs of the slain Hugo DeMann are settled, his family proceeds with the development of DeMann Suites hotel on the shore of Lake Maxinkuckee in northern Indiana. During the construction of a new luxury pool, bones of ancient Potawatomi Indians are disturbed and fears of spirits are rising.

Two teenage sisters have now gone missing from DeMann Suites. Their father was the judge in the trial of DeMann’s murderer. Criminal elements may still hold a grudge against him for his role in their crony’s life sentence. Could they be behind the girls’ mysterious disappearance?

When the investigation moves to Europe, Interpol searches for a nefarious organization in Berlin. Intel from the CIA leads them to the masterminds behind the production of radioactive bombs. Suspected Nazi sympathizers involved in this dangerous scheme must be stopped before their weapons are delivered to the hands of Middle Eastern terrorists.

Sign up for our newsletter to find out about great mystery books. Once a month one subscriber will win one book from our site.
Filed Under: Featured Books, Mystery/Suspense/Thriller Series Tagged With: J.T. Kelly