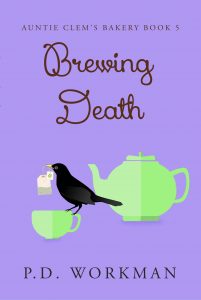 Erin is finally safe and sound in Bald Eagle Falls, with her sister in town and the chance to finally get to know her. She’s done with secrets and murder. But fate and a killer have other things in mind, and before she knows it, she is faced with an unexplained death, with Erin and her friends in the middle of it.

Tea and trouble are brewing in Bald Eagle Falls, and Erin doesn’t want to find herself in hot water.

What Inspired You to Write Your Book?
This is the fifth book in the Auntie Clem's Bakery series. Erin Price, the owner of Auntie Clem's Bakery, bakes gluten-free, vegan, and allergen-free treats for those with special diets. And solves murders on the side, of course. Personally, I am celiac and vegan with multiple allergens, so I had the background knowledge needed for Erin's baking. I wanted to write a fun culinary cozy series that would educate people on special diets while entertaining them at the same time.

How Did You Come up With Your Characters?
I tend to start with pictures or very broad strokes for the kind of character I need, establish what their goals and conflicts are, and then let them introduce themselves to me.

Surprisingly, it was Mary Lou who was the first to stand up and make motions toward leaving. She was usually one of the last ones to go, sticking around to help gather up the dishes and brush away the crumbs to help Erin and Vic out.
She caught Erin’s eyes on her. “I’m sorry. Duty calls. Roger hasn’t been feeling well this week. I don’t want to leave him to himself for too long.”
“Oh, I’m sorry,” Erin sympathized. “Is there anything he’d like? I could send you home with some cookies…?”
“No, that’s fine, thank you. Don’t want to do business on the Sabbath. What he really needs is for me to be home.”
“I meant I would give them to you, not that you had to pay,” Erin tried to correct the misunderstanding.
“I’m certainly not taking anything without paying for it. You’re running a business here, and you’re going to need every sale you can get.” Mary gave a significant look in Charley’s direction. Her meaning was clear. Erin was going to be in trouble when The Bake Shoppe reopened.
“We’ll manage,” Erin assured her. She didn’t feel quite as certain as she let on. The bakery’s first year had not been an easy one, and she wasn’t yet mentally prepared to face the competition of another bakery in town. There would still be people who had to come to Auntie Clem’s for the gluten-free baking, but not enough of them to support the business. How many others would stay loyal to Auntie Clem’s if they didn’t need gluten-free or other allergen-free goods? Would they all just go back to The Bake Shoppe when it opened?
Mary Lou put her thin, well-manicured hand on Erin’s arm as she walked by. “That’s right, dear,” she agreed. “I’m sure it will be fine.”

Erin didn’t expect Joelle to show up in town right away. In spite of what Charley had said, Erin figured Joelle would play it cool, saying that she would come but in no hurry to do so. What murder suspect in her right mind would just waltz back into town as if she didn’t have a care in the world?
But the week wasn’t out before Erin saw Joelle, with her chic yoga pants and long, spidery limbs, walk right by the bakery. Erin turned to Vic to point Joelle out, but Vic had already seen, and had turned toward Erin, eyes wide, mouth open to make a comment about it.
Erin grinned. “Miss Joelle Biggs is back in town,” she acknowledged.
“Still can’t believe Charley was able to talk her into coming.”
The bakery was pretty quiet, with only the elderly Potters standing there looking at the display case and waffling over the choices. Vic slipped out from behind the counter and walked to the front window to watch Joelle’s progress down the street.
“Where is she going?” Erin asked.
“They must be meeting at The Bake Shoppe.”
“Should somebody go over there…?”
Vic’s eyebrows went up. “And do what, exactly?”
“I don’t know. Make sure they don’t kill each other.”
“And pray tell, how would we do that?”
Erin leaned on the counter, trying to come up with an answer. The last time she had been into The Bake Shoppe was when Trenton had died, poisoned by the muffins Joelle had purchased at Auntie Clem’s Bakery. Just thinking about it made her muscles tense up and her breathing grow shallower. She and Terry Piper had spent hours keeping up CPR until an ambulance from the city could get there. Erin rubbed her biceps. What an ordeal that had been. And a hopeless one, as it turned out. Trenton had never revived.
“I don’t know. But I don’t think they should be left alone together.”
“We’ve got no reason to go into their place of business. We can’t stop them from having a meeting.”
Erin fought the urge to bite her nails. She tried to distract herself, turning to the Potters with a pasted-on smile. “See anything you like today?”
“We were thinking of the chocolate muffins,” Mrs. Potter started out, her quavery voice slow and deliberate.
“Good choice,” Erin approved. She reached for the muffins. “How many would you like?”
“But then we were looking at the blueberry ones,” Mr. Potter put in.
Erin wasn’t fooled a second time. She waited for the next installment in the story.
“We did have muffins last week,” Mrs. Potter noted.
“Yes. So, something a little different this week? Maybe cookies or some fresh rosemary bread? I know you like that…”
“Mrs. Potter likes the rosemary,” Mr. Potter disagreed. “I like the poppyseed.”
“I have poppyseed bagels today,” Erin said desperately, pointing to them.
“Mmm…” Both of the Potters gazed into the display case, considering the poppyseed bagels and everything else in turn.
Erin raised her eyes to Vic, who was turning away from the front window with a mirthful smile. She walked back to her place behind the counter. “You can’t rush the future,” she advised placidly.
Erin settled back to wait. It wasn’t like there was a line up behind the Potters. Things would be quiet until school let out. Assuming Charley and Joelle didn’t kill each other.

Author Bio:
P.D. Workman was born and raised in Alberta, Canada. She writes riveting young adult and mystery/suspense books dealing with mental illness, addiction, abuse, and other social issues. She has won several literary awards from Library Services for Youth in Custody for her young adult fiction. She currently has over 30 published titles and can be found at pdworkman.com. She has been married for 25 years and has one son.

Sign up for our newsletter to find out about great mystery books. Once a month one subscriber will win one book from our site.
Filed Under: Mystery Books Tagged With: amateur sleuth, cozy mystery, Culinary, female detective, pets