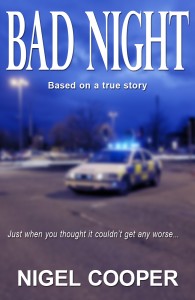 Just when you thought it couldn’t get any worse…

Based on a true story

A short story about a young man who thought his 15-mile journey across London late one night could not possibly get any worse – talk about Murphy’s Law on steroids. When he eventually does reach his house, things get worse; much worse.

What makes Bad Night even more interesting is the fact that it is based on a true story. This actually happened to a friend of mine several years ago. We’ve all heard somebody recount something bizarre, unusual or just plain outrageous, that happened to them, or somebody they know, and you probably thought to yourself, ‘you couldn’t make it up.’ Well, in this case I didn’t have to as it really happened. Naturally I’ve changed the names of the two characters in the story to protect their identity.

What Inspired You to Write Your Book?
It’s based on a true story of what happened to a friend

How Did You Come up With Your Characters?
Based on two friends

Author Bio:
Nigel Cooper was born in England, UK. He grew up in the Lake District, but later moved down south to London.

Nigel wouldn’t really want to work for any company that would employ him, he has been self-employed for most of his working life as: photographer, classical pianist, private detective, video producer, magazine founder/editor, rant columnist and journalist.

In his early years Nigel also had several irrelevant and inconsequential jobs including working as stretch limo driver and a one-man operator/bus driver for London Transport. He still has his PSV (Public Service Vehicle) licence, badge and pass to prove it.

While in the employment of another company he actually got sacked for being too efficient at what he did; piece-work at a belt factory in Queens Crescent, North London. It upset the other factory workers that he was earning three times more money than they were. The boss (sad as it made him) had to let Nigel go due to the unrest and tension on the factory floor.

Of the menial jobs where Nigel was employed, they never lasted more than nine months; at least his boredom threshold didn’t. Working as a commis chef, bus driver and salesman, all ended after exactly nine months. The fact that these jobs lasted the term of a pregnancy is purely coincidental.

His shortest employment lasted only three hours; his personal best record. This was during his first ever job as an apprentice barber in Swiss Cottage, North London. Three hours of sweeping up hair, refilling shampoo bottles and cleaning sinks was all he could take; he left at lunchtime.

Later, he got serious and studied screenwriting in London, where he learned the art and craft of creative writing for film and television. In 2004 he became the founder/editor of a specialist UK-based television/broadcast video production magazine. Although it was hugely successful, he sold the magazine in November 2011 to become a full-time author of fiction.

Nigel has had many years’ experience as a writer of technical articles, tutorials, reviews, news stories and journalism, not only for his own magazine, but also for many other well known publications, magazines and newspapers. It was during these years that he found his voice.

In 2011, Nigel had an overwhelming desire to move into creative fiction writing, so he set about researching his debut novel in the dark romance vampire genre. This desire had been smouldering inside him for a few years. Having seen various classic vampire movies in the past, he decided to write a vampire story that he himself would want to read.

After extensive research and planning Nigel completed his debut novel, Email From A Vampire, which was published in July 2012.

After more research and writing during 2013 he completed his second novel, Sophia; a different genre altogether. Sophia was published in January 2014. See www.nigelcooperauthor.co.uk for more details.

In his spare time Nigel enjoys playing the piano. He studied classical music at Trinity College Of Music, London, attaining a degree, and is an accomplished classical pianist. He enjoys photography, swimming and badminton, spending time in coffee shops and eating out. He is an animal lover and loves dogs, especially Cavalier King Charles Spaniels and small affectionate toy breeds.

He is currently working on his next two novels: a horror story and a crime thriller.

Sign up for our newsletter to find out about great mystery books. Once a month one subscriber will win one book from our site.
Filed Under: British Detectives Tagged With: action, crime, london, true story