You are here: Home / Buyer's Guides / The Case of the Bourbon Street Hustler by Gene Poschman 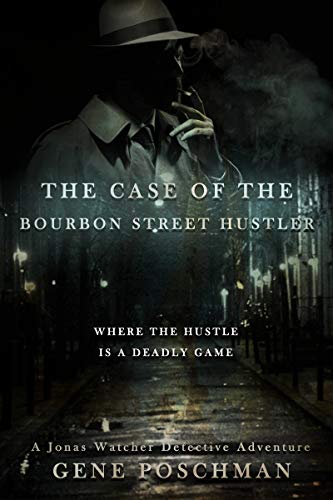 The Case of the Bourbon Street Hustler by Gene Poschman

Murder in the Bayou!

In New Orleans 1930s, the Crescent City; There is an armed standoff between Louisiana State Troopers and New Orleans Police; An art swindle that may end in murder; A dead man who may not be; Smugglers working the Bayou; And someone wants Jonas dead.

Jonas Watcher arrives to determine if Martin Stanton is really dead. Someone is tailing him to make sure he doesn’t find out. The investigation takes him from the French Quarter to its surrounding Bayou where he discovers that all the criminals aren’t in the city and not all the reptiles in the Bayou are on four legs. If he’s going to stay alive, Jason will have to rely on “Invisibles” that aren’t his own and a Colt 44 that is.

“The Case of the Bourbon Street Hustler” is the second novel in the Jonas Watcher Detective Adventure series. Martin Stanton is dead. As dead as a coffin nail, isn’t he? It is detective noir at it’s best as Gene Poschman, takes Jonas out of his element and drops him into the Crescent City during political turmoil between New Orleans police and Baton Rouge troopers. He mixes in an old love interest, the New Orleans underworld, and friends from San Francisco for a heady brew of murder, mystery, and mayhem.

Take a journey back to the 1930s New Orleans. There are Jazz and Blues in the French Quarter. New Orleans Police hold off Baton Rouge troopers in the Bayou. And on the docks by the River, an art swindle gone wrong, leads to a deadly fight on the docks.

What Inspired You to Write Your Book?
Jonas Watcher is a detective from the 1930s. In the first novel, I introduced a lot of characters and set up his origin. The first novel was complete in itself but there were some open questions I thought should be resolved. Additionally, I wanted to write a novel with New Orleans as a backdrop. 1930s New Orleans seemed a great place for a noir detective story.

How Did You Come up With Your Characters?
Jonas Watcher was born as an homage to noir detectives, with a touch of a paladin in the 1930s.
Lieutenant Sanders is an intelligent police officer. He goes by the book, but he can read between the lines.
Betty, Jonas' "secretary" is an homage to Della Street. To know who she is you'll have to read the first book in the series "The Case of the Running Bag". Don't worry, it is free also.

Book Sample
I grabbed a sandwich and a Coke from the diner and headed up to the fourth floor in the elevator.
The doors opened. It was too quiet for me. I stepped out slowly. A man was coming from the direction of the office, collar pulled up and hat pulled down. He didn't want to be recognized. As we passed, and he stepped into the elevator, the waft of cologne that hit me was overwhelming. I might not be able to identify him in a lineup, but I would be able to smell him coming from two blocks away. I walked past the office like I was going somewhere else until the elevator closed, then I dashed the office door. Someone had tried to jimmy the lock. There were a couple of doors between me and the Colt, and I wanted that gun loaded and in my hand in case my nose started screaming again.
I didn't fumble keys and I slid through the door, planted my sandwich and Coke on the receptionist’s desk, grabbed a chair and jammed it under the doorknob very quickly. Then I set the lock. I went to the desk in the inner office, opened the bag, took out the Colt, loaded it, and then I just sat there for a couple of seconds remembering to breathe. I don't know which I noticed first: the sound at the door or the pungent smell of my visitor. I stood up and decided to see what he wanted. Breaking glass, the fumbling of the door, and the chair being pushed gave me pause to wait before I offered an invitation.
“Miserable shamus trick!” he yelled.
He busted through the door and raised a snub-nosed thirty-eight in my direction. It was the last thing he did.
When Adrenalin hits, everything goes into slow motion. I already had the Colt positioned. I cocked the hammer and pulled the trigger twice. I didn't really see the bullets leave the barrel and travel the twelve feet to their destination. I did see as each one hit its target. Although he had busted the door in, he hadn't gotten through it. His single shot went down and wide as he was knocked back by the impact of the forty-four slugs.
I suppose I heard each projectile as it thumped into his chest. I saw what seemed like dust jump from his coat. The look of surprise on his face told me he didn't expect whoever was in here, to be armed. By the time he hit the wall on the other side of the hall, he was dead. He collapsed slowly, sliding against the wall and leaving a blood trail down to the floor.
I walked to the door and slowly looked around. Nobody came out into the hall to see what happened.
Curiosity wasn't going to kill any of these cats. I guess they figured they'd find out what was going on when the police arrived. I backed into the office towards the receptionist’s desk, just in case more than one visitor was waiting to see me. I set the forty-four down on the desk. I picked the receiver from the candlestick and dialed the precinct. When the operator answered I held the mouthpiece up.
“Lieutenant Sanders, please.”

Links to Purchase Audiobook version – Click links for book samples, reviews and to purchase
Buy The Case of the Bourbon Street Hustler Audiobook at Amazon