You are here: Home / Cozy / Saddled with Death by Irene Sauman 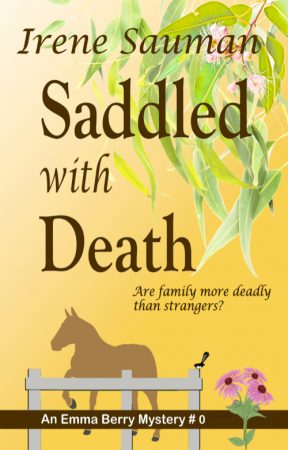 Originally published as a novella, this prequel to the Emma Berry Mystery series in now novel length as Emma felt, on reflection, there was more to tell about events at the time. Set in the 1870s on the Murray River when paddle steamers were as common as buses, the story features a not-so-perfect heroine, interesting supporting characters, and a murder mystery that will, hopefully, keep you guessing.
A terminally ill woman. A Murder. An old promise. Emma can understand, in the current situation, why Matty wants to honour the old promise they made but she isn’t ready for that commitment yet. If she ever will be. Now life has been complicated by the arrival of visitors, including one with an even older grudge against her. Tension between family members and guests is immediately apparent. When a body is found in the stable some want to mark it an accident. Emma is charged with finding out the truth, a task made more stressful because of who she saw that night. But it’s her inability to keep her thoughts to herself that puts her in the path of the murderer. Who has the most to lose – or gain? Are family more deadly than strangers? And can she call time on that old promise without breaking her word?

Targeted Age Group:: suitable for any age group from 15 up

What Inspired You to Write Your Book?
I grew up and went to school by the Murray River. My father's family were involved with the paddle steamer trade for around 100 years. My great grandfather William Bennett is listed as the Captain of the PS Sapphire in the 1897 register of the Mildura Customs office. The riverboats at that time hauled wool to market and delivered supplies and anything else the sheep stations needed, also carrying passengers. The family later had the PS Britannia, a hawking boat, and later still, my grandfather and two of his brothers were fishermen operating from riverboats. It seemed a natural choice to set this series during the heyday of the paddle steamers before railways took over the bulk of the river trade.

How Did You Come up With Your Characters?
Emma is the outspoken person I would have liked to be in my twenties and who I am more like now at 73. My other characters seemed to evolve with the plot.

Book Sample
Prologue
Tuesday 20 December 1869
What a relief to get away on his own. There was only so much family he could take at any one time. One was forced to live in too close contact even here, in this supposedly idyllic setting on the Murray River. Idyllic for some anyway. He had no interest in farm work and animals. And there were no poker games, no deals on offer. Well, not normally anyway.
Leaves and twigs scrunched underfoot. Invisible birds cheeped and magpies, he recognised them, warbled in the gum trees above his head. The river flowed lazily beside him the water invitingly cool in the heat. The temperature had to be well into the nineties today. Wasn’t there a small sandy inlet along here somewhere? He might take off his shoes and cool his feet. How long had it been since he’d done something like that?
He swished his stick against a bush and startled a frilled-neck lizard seeking shade. It reared up, frill extended, mouth open emitting a harsh hissing sound. He could have whacked it but was feeling too pleased with himself to bother and ambled on instead.
This latest venture would be a success, profitable for everyone. And who would have thought George would be the one he’d be involved with. Good old steady George. But it would be a nice change to have some success, he thought wryly. There hadn’t been much profit from his investments in recent times. He could understand Dora being a bit annoyed. Fortunately, she didn’t know the extent of his past losses. But this would be different. There was no risk with this despite what she thought.
Ah, just as he remembered. A sunny inlet with red sand lapped by inviting coolness. He sat and took off his shoes in the shade of the trees, sticking his socks inside. He stepped onto the sand anticipating the feel of it between his toes. Damn, it was burning.
Quick hop-steps on tiptoe took him the few yards into the water. Ahh, that was better. He wriggled his toes, the sand rising and turning the water opaque until he couldn’t see his feet. Yes, Dora would be all right. He had her on side now. It was all about Anthony for her. That niggled. As if he didn’t want to leave a healthy legacy for his only son. Well, she’d see. This investment would put things back on track. His luck was changing. It would all work out.
He’d never seen so many ducks. There must be hundreds of them. And all for the taking. They were having roast duck for Christmas lunch, Margaret had said. He supposed there were some benefits to life out here in the bush. Not enough though. You’d get tired of duck, soon enough, too.
He slid his feet forward a few inches, pulling up his trouser legs. Relief for his feet had become discomfort for the rest of his body as the sun, no longer screened by the trees, threatened to bake him.
He turned. Damn. He was going to have to go back over the sand to get to his shoes. Ah, no. There was a better way. He’d wade further around and come back up in the shade. Easy.
He rolled his trouser legs up to his knees. The sand beneath his feet turned to a fine sludge as he left the shallow edge and he felt invisible things brush against his skin. Why had he thought this a good idea? He couldn’t wait to get out and back on dry land.
The water was deeper and darker here in the shade and the bank steep, the water already up past his knees. His trousers were soaked. He grasped an overhanging branch to haul himself out.
The crunch of footsteps on leaves surprised him. He looked up.
“Oh, it’s you. Grab my shoes, would you? They’re just…”
The blow to his head took him by surprise. He fell back. The last thing he felt was the cold water closing over him.

Author Bio:
Irene is a retired historian living in Perth, Western Australia. She grew up and went to school in New South Wales by the mighty Murray River. Now living in Western Australia, she has three children and four grandchildren, and a sister who beta reads her books for plot holes and to see how quickly she can solve the mystery. (So far, she's not winning which Irene finds rather pleasing but is carefully refraining from boasting, family relations being important, after all.)
When not writing, Irene reads, watches tennis, plays croquet (old age and treachery will defeat youth and enthusiasm every time), and has a reasonably green thumb, which means very little dies in her garden, unlike in her cozy mysteries.
Her favourite authors-past are Anthony Trollope, Dorothy Sayers, Ngaio Marsh and Agatha Christie. She reads heaps of modern authors too, not restricted to those who write cozy mysteries, but they are a favourite.

Sign up for our newsletter to find out about great mystery books. Once a month one subscriber will win one book from our site.
Filed Under: Cozy Tagged With: amateur sleuths, Australian setting, cozy mystery, female sleuths, historical mystery, Irene Sauman