You are here: Home / Action & Adventure / Pink Panthers: The Greatest Thieves in the World by Neboysha Saikovski 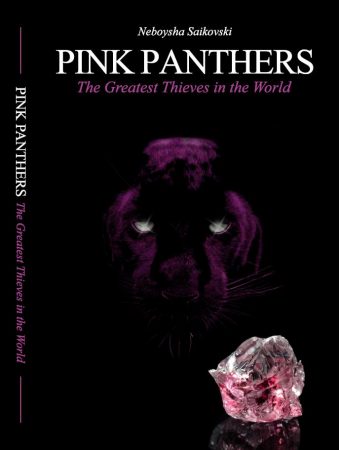 Ocean’s Eleven meets The Sopranos and The Godfather in this real-life story thriller about the infamous Pink Panthers gang of diamond thieves which has it all, shocking war and political drama, sweeping dialogue, dark humor, well-placed twists and flashbacks, and sufficient heist action scenes and crime thriller suspense to keep you constantly engaged.A powerful blend of real-life situations and crime thriller. One elevates the other, making this novel’s theme all the more important in today’s world… In the end, you will wonder who are the real greatest thieves – diamond thieves or corporate and political elites?

After the thieving team of the Pink Panthers successfully carried out diamond robberies in Antwerp, London, and Tokyo, they are recruiting an elegant logistics expert and a top make-up artist to prepare for the robbery at the Diamond Biennale in Paris. After successfully completing the job in Paris, they carry out two more spectacular robberies together, at the Amsterdam airport and in Saint Tropez, after which discord and attrition occur within the gang over the division of the loot. If there is no reconciliation, the rest of the gang is forced to forgather and train a new crew for another robbery, this time in Dubai.

What Inspired You to Write Your Book?
This novel is the first part of a trilogy that deals with the socio-historical context of emergence, rise, and (temporary) fall of the famous and powerful international robber group, Pink Panthers. I have been writing my first novel “Pink Panthers: The Greatest Thieves in the World” for the last three years but I dreamt about writing it for the last 15 years since I read the reports of their first robberies.

By personalizing the functioning of criminal cartels, the horrors of war, the violent discord of country and pitiful dissolution of a family, and showing the results of these bold events have on individuals is the general theme I tried to dive into with this novel. The light form of adventure drama shows the correlation of organized crime, social anomalies, wars, and interests of the great who ruthlessly manipulate and destroy the lives of the small, from individuals to nations. The background story shows the entire process of the diamond business, how diamonds come to jewelry stores, from relentless exploitation of rich deposits of poor third-world countries and inciting bloody civil wars in them, to the intertwining of the diamond business with drug cartels, human trafficking, interests of banks, corporate and military-industrial magnates and diplomatic-political machinations.

If you’re curious what it’s like to be a Pink Panther, read this book. If you have the courage, dare follow the steps of our heroes, embark on an action-adventure with the Pink Panthers, and personally experience the world’s most famous diamond robberies. Furthermore, find out how diamonds are made and come to that array of glittering shops, from the hot sands of Africa where greedy corporations exploit human and mineral resources in collaboration with corrupt politicians, through shining modern Europe all the way to Dubai. Get to know the dark world behind all that glitter and glow of riches, touch the blood, sweat, and tears that they represent in reality.

How Did You Come up With Your Characters?
I considered them yet another gang of robbers who dare defy the society and its norms taking such risky steps. However, as time went on, I realized that all the risk that the Pink Panthers had invested in the robberies was very well calculated in the overall equation. I don’t even have to mention that the locations chosen by the Pink Panthers sounded bombastic as if from the best Hollywood production. Paris, London, Amsterdam, St. Tropez, Dubai! The ideas that the Pink Panthers introduced as a ‘patent’ in committing the robberies were more intriguing than even the greatest movie-minds could come up with. And I’m not just talking about disguising themselves as women, fleeing by speedboat and the like, but that all the robberies were committed without a single victim, and that’s what makes the Pink Panthers unique in the criminal world. With their imagination and extremely expressed audacity in carrying out their robberies, they left the world breathless, including me.

I tried to explain where they come from as well as the background story of all those criminal cartels they interacted with. I obsess about my characters, as an infatuated lover, mixing up fantasy with the reality, my own experience, and reflections with ideas I mean to convey. I dream of them, I think of them day and night, observe them telling me their stories, talking and listening to them. I have a rich imagination and create whole dialogues and scenes, even chapters in my mind before writing them down. Then I add the narrative and descriptions according to my objective and themes I want to describe and convey.

Author Bio:
I am the author working on the Pink Panthers trilogy series, including the first novel “The Greatest Thieves in the World”, which was published globally in June this year. I am a logistics specialist having worked for large international organizations and corporations such as the United Nations, Halliburton/KBR, or DynCorp, being stationed for twenty years working in areas consumed by ferocious civil wars in Bosnia and Serbia or the occupation of Afghanistan and Iraq. I am an author who lived and worked in 4 continents and witnessed 4 wars, walking the paths of my characters, therefore being able to turn my extensive experience into inspirational and instructive fiction and non-fiction narratives. I am telling stories about paradoxes of the modern world where evil reigns while chivalry yet survives and write only about real-life stories which have it all, a powerful blend of real-life situations and crime thriller, shaking family experience and shocking war and political drama.

Links to Purchase eBooks
Link To Buy Pink Panthers: The Greatest Thieves in the World On Amazon

Sign up for our newsletter to find out about great mystery books. Once a month one subscriber will win one book from our site.
Filed Under: Action & Adventure Tagged With: pinkpanthers# greatesthieves# diamondheist#