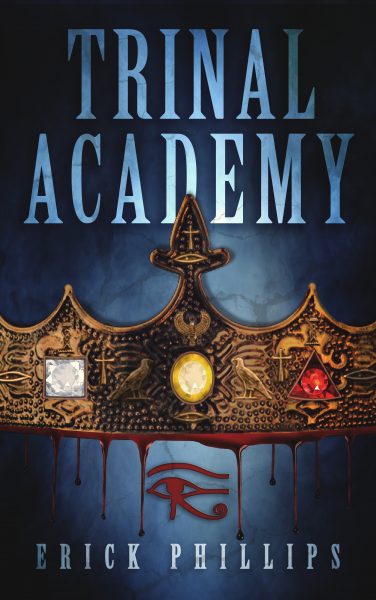 Deeply rooted in ancient Egyptian mythology, Trinal Academy is a tale of hidden secrets passed down through the blood of afflicted children. It explores the internal struggle of finding oneself, whilst fighting for love amidst an attack from the oldest of evils.

In the unassuming town of Ely, there are bizarre traditions and things hidden within the shadows shrouded in myth and folklore. Things that no high school freshman should ever be exposed to. But unfortunately for Elek Barington, not long after his enrollment into Trinal Academy, myth becomes reality, and old tales become his lessons for surviving it.

At the start of the semester, Elek meets Lucinda Nadir and Sahara Clarice, two female students that are as ravishingly beautiful as they are mysterious. They are polar opposites of each other, but there is a magnetizing quality they share that Elek is drawn to from the very beginning.

Shortly following, high profile senior and sorority captain, Rachel Fergusson, is viciously murdered. Prompting a widespread investigation and generating Elek’s intrigue in the three illusive peer clubs offered at Trinal Academy. He keeps hearing about them, but the way that they’re talked about, makes them sound like an Elitist Cult, rather than the ordinary precollege associations that they are marketed as. Elek doesn’t fully understand why they are so highly regarded in the city of Ely, or why every single member brandishes a very large ostentatious ring on their middle finger, but he’s about to. Because Sahara is driven beyond reason to join the very sorority that Rachel belonged to.

This sets a chain of events in motion, and before he can even process it, Elek is thrust into a dark underworld brewing beneath the perfect exterior of his high school. A world where an ancient supernatural quarrel rages on behind the scenes, and Trinal Academy is at the very epicenter of it all. As Elek ventures deeper into the rabbit hole, he discovers things about his family and the history of mother earth, so shocking, that it permanently alters the coarse of his outlook and his future. But Elek isn’t the only one with family secrets, as he discovers that Lucinda and Sahara are much more than meets the eye. And he learns that his destiny is intertwined with theirs in ways that he could never imagine.

Sign up for our newsletter to find out about great mystery books. Once a month one subscriber will win one book from our site.
Filed Under: Featured Books, Kindle Unlimited eBooks