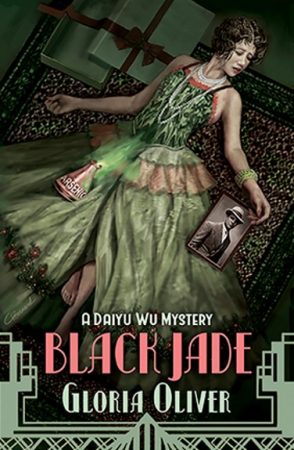 Could an old-fashioned ballgown be used to commit murder?

Daiyu Wu is aware that fear of the Yellow Terror has made her nationality a rare breed in the Lone Star State. Being Chinese and blind makes her doubly unique in 1930 Dallas. Despite these impediments, anyone who dismisses her for either fact does so at their peril.

One day, at her family-owned laundry business, Dai detects the scent of burned garlic. With the help of her companion, Jacques, the source is soon discovered. It is a green ballgown. The gown has money pinned inside it to pay for the cleaning, but oddly, it came with no address label to identify its owner. Her extensive knowledge leads Dai to believe someone has committed murder using arsenic. The perpetrator is trying to use White Laundry to hide the evidence. But no mention of foul play turns up in the newspapers, and there’s not enough proof to convince the police there’s been a crime.

Her curiosity and intellect stimulated like never before; Dai ignores the possible consequences and sets out to solve the mystery with the help of her canine companion, Prince Razor, and her confidant, Jacques Haskins. It’s either that or let the killer get away with it — assuming a spoiled popinjay, his jealous self-appointed girlfriend, and Dai’s overprotective parents don’t get in her way.

Sign up for our newsletter to find out about great mystery books. Once a month one subscriber will win one book from our site.
Filed Under: Cozy, Featured Books Tagged With: 1930 Dallas, arsenic, Black Jade - A Daiyu Wu Mystery, Cozy Historical Mystery, cozy mystery, Daiyu Wu Mysteries Book 1, Gloria Oliver, Yellow Peril