You are here: Home / Bargain Books Under $3 / Deadly Trail by Marilyn Meredith 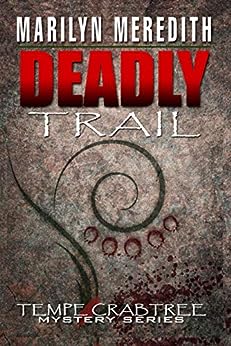 The peace of the town of Bear Creek in the Southern Sierra is disrupted by the unusual death of the owner of the local inn. Though resident Deputy Tempe Crabtree’s job is not to investigate a murder case, she feels compelled to get involved when her friend Nick Two John is arrested. She realizes there are several people who wanted the victim dead, including his wife. As she continues to discover clues she puts her job, her wedding planning, and herself in danger.

What Inspired You to Write Your Book?
Moving from a big city to a small town in the mountains gave me the idea to write this book as the surroundings and the people were so different from what I was used to. The iconic inn, the main location in the story, is similar to the real inn but with fictional differences. Many folks were unhappy with the logging industry and what was going on at the time, gave me the idea of the beginning of the story.

How Did You Come up With Your Characters?
Deputy Tempe Crabtree is a combination of three women I met soon after I became a part of the small town: a female resident deputy, a female police officer I went on a ride-along with, and a Native American who great up on the nearby Indian reservation. Nick Two John came about after a met a popular and handsome Indian from the reservation–though most everything about the character is fictional. Tempe's fiance, a preacher, has attributes of many of the ministers I've known over the years.

Book Sample
Deputy Tempe Crabtree drove her official whit Blazer down the rough track. She spotted the muscular, bronze-skinned Yanduchi Indian plunge his Buck knife deep into the sidewall of one of the big tires of a truck fully loaded with newly-cut logs. She didn't have to see his face, she recognized him by his build and waist long black braids–Nick Two John.
If it hadn't been for the group of angry loggers, their blocked equipment, and the belligerent demonstrators, the scene might have been idyllic. Lofty cedars and fir trees interspersed with an occasional redwood grew so close together their foliage nearly blocked out the sun. Enormous ferns covered the floor of the forest.
Tempe jammed the brake pedal to the floor and leaped from her vehicle, but not soon enough to prevent Two John from yanking the knife downward and ruining the tire.
Before she could reach him, a tall, skinny logger threw down his cigarette and stomped toward Two John. "What the hell's wrong with you, man? You can't get away with that."
He swung at Two John.
The Indian blocked the blow with the arm that held the knife. "Back off, buddy," he growled. "I don't want to hurt you."
With her hand on her baton, Tempe strode toward the grappling men. "Throw down your knife, Nick. Step away from each other. Now."
"Did you see what he did, deputy?" the logger whined.
"How could I miss it? You're under arrest, Nick. You have the right to remain silent…" She recited the rest of his rights while Two John compliantly put his wrists together behind his back, awaiting handcuffs. He was only a couple of inches taller than her own five-foot eight.
When she'd finished, he said, "You ought to be ashamed of yourself, Crabtree."
Tempe laughed. "Because I arrested you? I'm doing my job."
"No, that's not what I meant. You ought to be demonstrating right along with me. Doesn't your Yanduchi ancestry mean anything to you?"
"Obviously not what you think it ought to.” Tempe led him to the Blazer.
"Didn't your Grandma teach you anything about what it means to be a native?" Nick asked.
She opened the door. "I was only eleven when Mama Lena died." When Tempe thought of her grandmother, she remembered herself as a little girl sitting on the comfortable lap with her head against the cushioning bosom, gazing up into the wrinkled brown face and twinkling dark eyes. She remembered her grandma brushing out her long graying hair and braiding it, intertwining colorful beaded ribbons. The memories made Tempe smile and feel sad at the same time. She had loved her grandmother very much.
With Two John locked inside the Blazer, Tempe turned to face the rest of the Save-the-Forest demonstrators who looked out of place in the usually peaceful surroundings. They shouted unintelligible slogans while crowding around her in a threatening manner. Logging in the national forest in the southern Sierra had been a controversial issue for a long time. Tempe had never been drawn into the dispute before. As resident deputy of Bear Creek, she spent her time enforcing the law in and around the small foothill community. But today, when the dispatcher put out the call she had been the nearest to the trouble.
"Quiet down," Tempe said. "Your permit is for a peaceful demonstration. You don't want to join Two John in the jail down in Dennison, do you?"
The voices lowered to a rumble but the small group continued to press nearer. If there were a problem she couldn't expect much help from the loggers, she'd handed out too many speeding tickets to them. Pulling herself into the driver's seat of the Blazer, she radioed to the substation requesting help. A highway patrolman came on to report he was only a few minutes away and would come and take over so she could transport her prisoner.