You are here: Home / Mystery/Suspense/Thriller Series / BODY ON THE SHORE by Diane M. Dickson 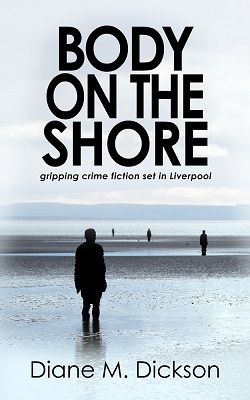 A nameless victim, an elusive killer, and a puzzling case for a detective in a new role

When a body washes up on Crosby Beach in Liverpool Bay, detectives quickly declare foul play. Yet they will struggle to establish the identity of the victim, let alone the killer.

Leading the inquiry on his first murder case, DI Jordan Carr must marshal a somewhat motley team to build a picture of what happened one grim day on the Mersey. Like footprints in the sand, in time the clues will disappear.

With a victim who has clearly concealed her own identity, it will require a journey into Liverpool’s underworld to shake loose the facts.

But once they have their man, the police still need to know why the woman was killed. And answering that question will be DI Carr’s biggest challenge.

BODY ON THE SHORE is the first book in a new mystery series by Diane Dickson. Look out for the second book, BODY BY THE DOCKS, also available FREE with Kindle Unlimited and in paperback. Diane is the author of many crime fiction titles, including the bestselling DI Tanya Miller series set in the Midlands and Oxfordshire.

What Inspired You to Write Your Book?
It was quite simply the figures on Crosby Beach in Antony Gormley's installation, 'Another Place'. I have been there a few times and feel that they are quite haunting, especially when you take into account that they will be left to decay and rot away (probably).

How Did You Come up With Your Characters?
As with most of my books the characters tend to just pop in when the time is right to fill the roles. I did base some of them loosely on people I knew when I was younger. The old man who liked a flutter for example. I did rather like him and he was someone from childhood.

Beatrice had always been afraid of the dark. Not so scared that it was a problem. Just a small quickening of her heartbeat, a tiny tingle of dread somewhere down in the pit of her stomach. Of course, you shouldn’t be afraid of something that doesn’t really exist, and the dark is only the lack of light. That’s what her mother had always told her. It was the things that might be hidden in the dark that were the cause of her fear. And with what had happened in the last few weeks, everything her mother had told her was now being called into question. Everything.
She knew that the chances of something really being there were very slim. At least, that was what she had made herself believe.
The noise in the night was small and indistinct. A cat, she thought, hunting in the alley. A dog possibly. But nothing to worry about, nothing to fear. Ironically, it was as she turned on the light that the danger came.
She fought hard, gave it everything she could. She clawed at his face and dragged at the bag and drew in panicked breaths. She mustn’t let it cover her mouth. She was dizzied and terrified, but she fought on until, at the end, apart from the pain, intense and stultifying, there was also a vague sort of indignant surprise. It seemed that she had been right about the dark all along.

DI Jordan Carr took off his jacket and hung it over the back of his chair. He removed the lid from his takeaway cup so that he could enjoy the aroma of his Americano.
While he waited for the computer to boot, he fished into the bag of pastries. He’d already eaten that morning with Harry and Penny but had treated himself to a croissant and a chocolatine. Maybe when he hit his forties, he’d need to be more careful, but that was a few years off yet. He worked out regularly and went running three times a week, so the extra calories didn’t appear to be doing him any harm right now. He was tall enough to carry a couple of extra kilos, he reckoned, but if he started to get too chunky Nana Gloria and some of his more ‘honest’ cousins would be quick to let him know. Nana Gloria had a bit of a thing for Idris Elba and kept on about facial hair: “Just a little bit, Jordan. Stubble, that’s what they call it. You’d look just like him and he’s a policeman as well.”
There was no point telling her he was an actor, Nana Gloria believed what she wanted to. Anyway, it wasn’t happening. When he’d let it grow there were a few grey hairs in among the black, which depressed him. Anyway, Penny was one hundred per cent against it.
Mornings would soon be different, when Penny started back at work and Harry went to the nursery. He was sorry about that. He relished the family time and it warmed him to know they were safe at home in Crosby while he was at work.
But Penny was ready to get back to work. She had come so far since the days in Oxford, just after Harry arrived, when she had been lost in the fug of depression. They had come through it and, though she loved spending time with their son, she needed something more.
The computer was booted. He wiped the grease from his fingers, tossed the empty cup and the papers into the bin and leaned forward to scroll through the overnight messages. There wasn’t that much. A couple of fights in the city centre, the usual crop of car thefts and some attempted break-ins. He could spend the morning catching up on paperwork.
Then his internal phone rang.
* * *
DCI Cross stood looking out of his window. The glass was grubby and wet and the scene outside, dull and grey. The view was of the tiny bit of green in front of the station, the litter-strewn road and the low-rise flats opposite. It was uninspiring and he pulled the cord to part close the vertical blinds.
“Jordan. Have you got much on at the moment?” he said.
“Nothing too pressing, sir.”
“Good. Got an odd one for you. Details have been sent through to you. Young woman found dead this morning, down on the beach. A suspicious death apparently. Medical examiner is over there. CSI should be on scene, the circus is underway. Out near where you live, I reckon. Crosby, isn’t it?”
“Yes, sir. So, why have we got it?”
“Don’t you want it? Too busy, are you?”
“No, of course not. It’s just that there is Waterloo nearer.”
“Apparently, they are overstretched right now, some people sick, a few on courses, well you know what it’s like. There’s no slack in the personnel cover these days. Anyway, they’ve asked for our help. If you’d prefer me to give it to someone else, I can. I just thought it was about time you took the lead. You’ve been here a while now, settled in and familiar and all that rot.”
“Yes, of course, sir. I’m ready.”
“Okay then. Off you go and, DI Carr, try and move this along swiftly. I don’t want DCI Campbell from Waterloo on my back every five minutes. Take that new lad with you. DC Denn, isn’t it? We might as well throw him in at the deep end. I’ve heard he’s keen.”
“A DC, sir.”
“Yes. I realise you probably want a detective sergeant, but he’s what we’ve got. Make it work.”
“Yes, sir. I’d better get on then.”
Jordan managed to keep his tone level and his expression impassive but the DCI was getting under his skin. Impatient, ill-tempered and blasé to the point of rudeness, and if that wasn’t enough Richard Cross had raging halitosis.
Jordan grabbed his jacket, rang through to Terry Denn telling him to get down to the car park, signed out, and was in the car within ten minutes of leaving DCI Cross’s office. The despatcher had sent the co-ordinates to his smartphone and the Google voice had him heading back along the roads he had travelled just over an hour before.
* * *
The promenade was a pantomime of blue and white. Crime scene tape, cars, uniforms and, of course, growing now, a crowd of onlookers. Officers were trying to move people away, but it was an impossible task. There was a white van with the force logo on the side and boxes of kit near the open rear doors. Jordan took out gloves and shoe covers and moved aside to let the young detective take his own gear. Terry’s face was pale and there was a fine sheen of sweat along his upper lip.
“First one?” Jordan asked.
“Yes, sir. I’ve seen stuff already, traffic and so on. A few nasty smashes, but this is my first suspicious death. It feels different.”
“Yes, okay. Most important thing, don’t contaminate the scene. Nobody will be impressed if you do that.”

Author Bio:
After the Secondary Education System in sixties Liverpool spat me out I had a pretty eclectic career. I worked as a veterinary nurse with the RSPCA, and then had a go at nursing (people this time). I had a super job as a Personnel Officer at a military hospital in Riyadh which presented very unusual challenges. After over twenty years in the Middle East I ended up as a PA in Portsmouth. I’m a total Reacher creature, Terry Pratchett addict and lover of JD Robb.

I’m a wife, mum, granny and a poet. I believe in the Loch Ness Monster, the Yeti, Dragons and think that ghosts are visitors time-slipping in the multiverse."

Sign up for our newsletter to find out about great mystery books. Once a month one subscriber will win one book from our site.
Filed Under: Mystery/Suspense/Thriller Series Tagged With: British crime fiction, detective fiction, Diane Dickson, Liverpool, Merseyside, murder mystery