You are here: Home / Mystery/Suspense/Thriller Series / The Secret of Heaven by Felix Alexander 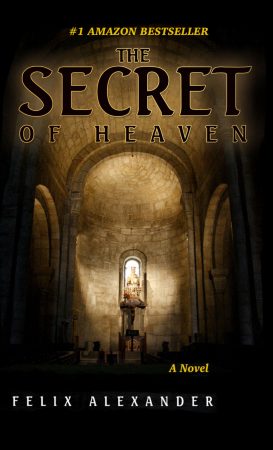 What Inspired You to Write Your Book?
One afternoon during a slow start of shift, while at work in 911 Police dispatch, I perused articles online and came across a few articles about a lost bible found by the Turkish government on the Mediterranean Sea.

During their attempt to prevent an arms deal on the Black market to prevent weapons of mass destruction from ending up in the hands of terrorists, they found a cache of relics that belonged in museums.

Among their findings was a lost bible dating back to the time of Christ that was purportedly written by one of Jesus' disciples, but it correlated the Islamic view of Jesus as a prophet and not a deity.

The Vatican requested to review the relic, so the Turkish government transported it to Rome with a police escort, because it had been valued at $25-million Euro. Shortly thereafter, the Pope stepped down for medical reasons, which caused quite a stir.

An Islamic cleric then spoke out about the incident, citing that in 2,000 years a pope NEVER stepped down for medical reasons, and added that the Catholic church has rituals in place for when a pope dies in office. A pope must serve for the remainder of his life.

Given that I had been raised Catholic, I was familiar with this rule and my curiosity had been piqued even further.

The cleric later went on to postulate that the real reason the pope stepped down was because he had read the lost bible and could no longer–in good conscience–lead a church that had been predicated on a lie.

Having studied religions for the past 25 years, I found the sequence of events to be quite fascinating!

So, upon reading these articles, I thought to myself: "There is a novel here!"

How Did You Come up With Your Characters?
Given that I seek to inspire and guide my children to be critical thinkers, I based the main character on my son, because I already envision him to be a better man than me.

The remaining characters merely emerged as personalities the story needed in order to be as entertaining as possible.

Book Sample
Lorenzo de Medici stared at the Bible in disbelief. All these years, all these centuries, a clue to the truth was hiding in plain sight. He flipped back and forth between the two verses, and read them repeatedly.
Matthew 13:11, He answered and said unto them, because it is given unto you to know the mysteries of the kingdom of heaven, but to them it is not given.
Luke 8:10, And he said, Unto you it is given to know the mysteries of the kingdom of God, but to others in parables; that seeing they might not see, and hearing they might not understand.
“What do you suppose this means, exactly?” Lorenzo looked up at Aiden.
Aiden sighed. He gazed at the letter again. The rose cross, the cryptic writing, and the Monas Hieroglyphica all hinted at something. But what? The Bible, he knew, had been a collection of canonical texts. The etymology of the word Bible having come from Latin and Hellenistic Greek, biblia and tà biblía, respectively.
“The books.” Aiden whispered.
“What?” Lorenzo stood with Bible in hand.
“Tà biblía literally translates to the books.” Aiden said without lifting his gaze from the letter. Although he did not have the slightest clue what the message was, it had been intentionally scripted to conceal something.
“The Bible was written in parables and allegory for a few reasons,” Aiden finally said. “Genesis, for example, condensed billions of years of evolution into seven days. It was the only way to explain the complexities of Creation that humans, at the time, did not understand.”
“Makes sense.” Lorenzo nodded as he stood beside Aiden, looking over his shoulder at the letter.
“Not to a Believer.” Aiden glanced up at him. “Even today, fundamentalists will vehemently defend their literal rendering of Scripture.”
“That’s because they believe it was divinely inspired.” Lorenzo added.
“Precisely!” Aiden held out his hand for the Bible.
He opened to the Old Testament.
“After the first five Books of Moses, come the Books of the Prophets. Their message was clear, and their prophecies were expected. So when Jesus appeared, many believed the prophecies had come to fruition,” Aiden said. “He wandered the land preaching about a new covenant with God. Beyond demonstrating that no one should consider him or herself above speaking with unscrupulous individuals, he also taught that anyone, regardless of the gravity of their sins, is righteous before God when he repents and prays for forgiveness.”
A throbbing pain jolted between Aiden’s eyes. A memory flashed across his mind. Lazzaro de Medici sat across him at the dinner table. A melancholy smile played on his lips.
I have made many mistakes in my life. Lazzaro’s voice echoed in Aiden’s mind. Perhaps it is not too late for redemption.
A blinding light flashed.
“Hey, you alright?” Lorenzo leaned forward.
Aiden leaned back in his seat. He drew a deep breath and pinched the bridge of his nose.
Their iPhones blared to life and interrupted the silence. Aiden lifted his smart phone off the desk, and Lorenzo reach for his inside his pocket. When they read the message they received from Miriam, they turned to each other in disbelief.
“We’ve gotta get outta here.” Lorenzo stuffed his phone inside his pocket and made to help Aiden up from the chair.
“What? Wait. What about Miriam?” Aiden lifted the letter off the desk.
“I’ll send one of Dad’s lawyers for her.” Lorenzo said. “In the meantime, we have to get you out of here.”
“Why?”
“Because the car she’s driving belongs to Susan.” Lorenzo led him out of the study.
“And?” Aiden folded the letter and placed it back inside the envelope.
“And I’ve been dodging the detective who wants to question you!”
“But we haven’t done anything wrong.” Aiden followed him into the kitchen.
Lorenzo grabbed a set of car keys off the kitchen counter. “Well, we can’t prove that, now can we?”

Being third-generation military, after a grandfather and uncle who served in the Korean War and Vietnam War, respectively, Alexander is proud of his service in the U.S. Army and grateful for his experience.

After his honorable discharge from the U.S. Army, his third year served in South Korea, he embarked on the long and arduous journey of a writer. Having made a name for himself during his tenure serving his country, he vowed to himself and his fellow soldiers that he would answer his true calling.

He lives in South Elgin, IL–to be close to his children–a son and daughter. He volunteers to promote literacy among youth with Villament Charities and the VM Mag (vmmag.org). In the evenings he journeys through the portals of his extensive, personal library. When he returns, he immerses himself in his writing, and pursues the scent of his muse.

Sign up for our newsletter to find out about great mystery books. Once a month one subscriber will win one book from our site.
Filed Under: Mystery/Suspense/Thriller Series Tagged With: #FelixAlexander #mystery #Jesus #Christ #Religion #Religious #Conspiracies #Conspiracy #ConspiracyTheory #Bible