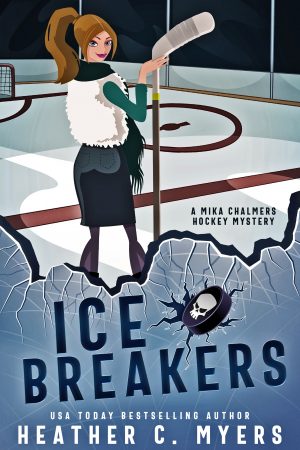 The last person private investigator Mika Chalmers expects to walk in her office is ex-boyfriend and NHL player, Eric Foresburg. He looks just like he did three years ago, tall, blond, and every inch a Viking.

This isn’t a social call.

Eric has gotten himself into some hot water. A woman is going to publicly accuse Eric of rape and he needs Mika to prove his innocence. With pressure from her father – who happens to be the head coach of Eric’s NHL team – and smarmy defense attorney, Ryan King, Mika has her work cut out for her. When feelings for Eric – feelings she buried a long time ago – start to resurface, her job of finding the truth no matter what gets increasingly difficult to do.

Despite the fact that Mika has connections with the police department – including the arrogant Detective Alex Beech – the answers aren’t black and white. Evidence reveals that Eric and the victim were together, but it turns into a heated he-said, she-said. It doesn’t help that Eric has been keeping things from Mika, things he should have disclosed before she agreed to take his case.

With the help of Beech, Mika must determine whether or not Eric is innocent before the court of public opinion finds him guilty and his entire life is ruined.

With the heated chemistry of Castle and the unpredictable twists and turns of Bones, hockey fans are devouring this new romantic mystery series by a USA Today Best Selling Author.

What Inspired You to Write Your Book?
My love of hockey, romance, and mystery! I wanted to combine all three things one into a fun, quick story readers could devour in a day and be satisfied – but still want more!