You are here: Home / Bargain Books Under $3 / A Girl Like You by Michelle Cox 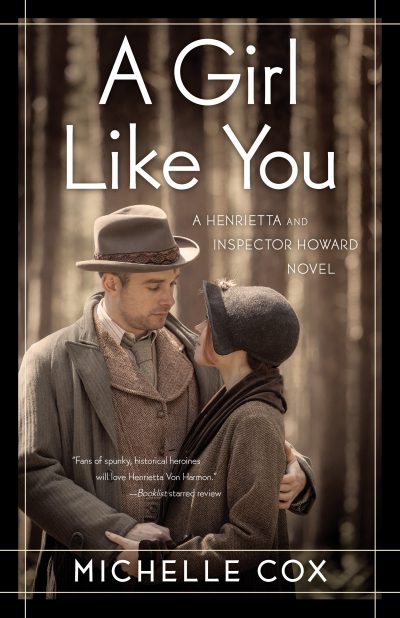 Henrietta Von Harmon works as a 26 girl at a corner bar on Chicago’s northwest side. It’s 1935, but things still aren’t looking up since the big crash and her father’s subsequent suicide, leaving Henrietta to care for her antagonistic mother and younger siblings.

Henrietta is eventually persuaded to take a job as a taxi dancer at a local dance hall―and just when she’s beginning to enjoy herself, the floor matron turns up dead. When aloof Inspector Clive Howard appears on the scene, Henrietta agrees to go undercover for him―and is plunged into Chicago’s grittier underworld.

Meanwhile, she’s still busy playing mother hen to her younger siblings, as well as to pesky neighborhood boy Stanley, who believes himself in love with her and keeps popping up in the most unlikely places, determined to keep Henrietta safe―even from the Inspector, if need be. Despite his efforts, however, and his penchant for messing up the Inspector’s investigation, the lovely Henrietta and the impenetrable Inspector find themselves drawn to each other in most unsuitable ways.

What Inspired You to Write Your Book?
The character of Henrietta Von Harmon was based on a real-life woman I met while working in a nursing home. She used to tell me that "once upon a time, I had a man-stopping body and a personality to go with it!" And thus, Henrietta was born. I "borrowed" a lot of details from this woman's life, so a lot of what happens in the book really did happen. I made up the murder, of course, and the inspector, but Henrietta is very grounded in reality.

How Did You Come up With Your Characters?
Besides Henrietta Von Harmon, who was based on a real woman (see above), the rest of the characters were completely from my imagination. Some of them, like Ma or Mr. Hennessey or Antonia, have slices of real people I've met. Stanley Dubowski, the lovesick neighborhood boy that follows Henrietta around, is an amalgamation of a group of boys that used to follow the real-life Henrietta in an attempt to protect her. I loved this detail, but couldn't think of a way to include a whole gang of boys into the novel, so I condensed them into Stanley.

Henrietta considered this prospect yet again as she carried out the second round of drinks, glancing back at Mr. Hennessey as she did so. She couldn’t imagine leaving him after all he had done for her, and yet it was hard to ignore the money Polly claimed to make.
“You do as you like,” Polly had said about a month ago as they shared a seat on the elevated train headed north from State Street, where Marshall Field’s flagship was anchored, “but I don’t know how long you’re going to waste your life in that dump.”
“Polly!” Henrietta said with mock irritation. “It’s not a dump! It’s quite charming, actually!”
Polly grinned as she blew her cigarette smoke straight up above them. Polly reminded Henrietta of a pixie of sorts . . . petite, with blond curly hair cut short just above her shoulders, and with fine, delicate features, not unlike Carole Lombard. She wore heavy mascara, which made her lashes look unusually long and accented her big brown eyes perfectly. “Really? News to me! Even the name’s awful. Poor Pete’s? Come on, Hen! Come to the Promenade with me. The music’s swell, and Mama Leone’s always looking for new girls; you’d be perfect. You’ll make loads more money . . . isn’t that what you’re always on about?”
“But I’ve told you, I can’t . . .”
“Yes, yes, I know. You can’t dance very well. But it’s like I’ve said, it hardly matters. It’s not Buckingham Palace. Most of the clods that come in there just want to hold a pretty girl in their arms for a few minutes. Nothing to it!”
“Yes, but . . . Mr. Hennessey . . . I just don’t know . . . ”
“Look, doll,” Polly said, getting serious. “You’ve got to look out for yourself, you know. You don’t worry about Mr. Hennessey; he can look after himself. You worry about you and all those brothers and sisters of yours.”
Unfortunately, she had a point. “Maybe. I’ll think about it . . .”
“Well, don’t think too long; you don’t know when a good thing might pass you by,” Polly said, standing up to get off at her stop in Lincoln Park. “See you next Saturday, then,” she added, giving a quick wave before stepping off the train. Henrietta watched her blend into the crowd before the train pulled away, heading north toward Logan Square. She envied Polly sometimes, living alone in her own rooms, with apparently no family or cares to weigh her down. She was her own woman, it seemed, able to come and go as she pleased. Henrietta had sighed as the train lurched forward. It wasn’t just that she couldn’t dance well or that she didn’t want to be unfair to Mr. Hennessey, though both of those things were true; it was that she wasn’t sure she wanted to go down the road of being a taxi dancer. Wasn’t there something wrong with dancing with men for money? Mightn’t it lead to more unsavory things?

She had put Polly off for weeks now, but as Mr. Hennessey counted out the night’s takings on the bar after the last man had stumbled out, she winced at her little pile and knew that Ma would be disappointed tomorrow. She had made a few dollars in tips, but it wasn’t much.
“Sorry, girl,” Mr. Hennessey said as he slid his pile of change off the bar and plopped it into the hulking black cash register at the end of it. “It’ll pick up. Just gotta give it some time. Just gotta wait for the cops to back off.”
Henrietta felt a burst of anger as she slipped her share of the money into her dress pocket next to her notebook. Didn’t the cops have anything else to do? Shouldn’t they be out catching gangsters or some such people instead of breaking up twenty-six games in corner bars on side streets? It just seemed unfair, wrong somehow.
“I know, Mr. Hennessey,” she said, giving him a weak smile as she slipped on her coat and wrapped a scarf knitted by Elsie around her neck. “See you tomorrow.”
As she walked home in the freezing January night, however, she ruminated on what Polly had said. Perhaps she should listen to her. Christmas had been terrible this year. Not only were there no presents except a bar of chocolate and an orange in each of their stockings, which she herself had insisted on buying, but the flu had hit them hard. Herbert had nearly slipped away from them to join Pa in his bed in the graveyard, and Eugene was still very weak. He had also quit school this year, but had so far only found work as a box burner behind some of the shops along Milwaukee. He had been hoping to get on at Sulzer’s, the electrics factory on Western, but each time he inquired, he was told there was nothing yet. Ma kept urging him to ask for a job at Schwinn, seeing as it was the least they could do, but Eugene always refused. He was generally quiet, but he could be stubborn as well. So far the twins had escaped the flu, but when Henrietta had left for work tonight Ma was fussing over them because she thought they might have a low fever. Henrietta prayed it was nothing serious and resolved to stop by Gorski’s tomorrow to see if they had any beef soup bones so that Ma could make them a beef tea. The money in her pocket wouldn’t go far, though. She sighed and remembered that their charge bill at Schneider’s was higher than it had ever been. The last time she had been in, Mr. Schneider had given her a look, something between frustration and pity, as he agreed to put the small pile of things she had set on the counter on their tab once again. She could kick herself now for buying the oranges; she should have gotten them each just a chocolate bar for Christmas. Ma had told her at the time that she was being extravagant, but she hadn’t listened. As she turned the corner onto Armitage, Henrietta decided reluctantly that she simply couldn’t wait any longer for business to pick up at Poor Pete’s; she was going to have to put her reservations aside and go see about the taxi dancer job. The problem was what to do about Ma.

For joining the author’s email/newsletter list you will get:
Mega prize-pack giveaways!