You are here: Home / Romantic Mystery / When Murder Comes Home by Shana Frost 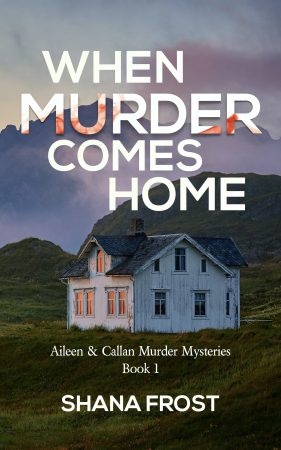 An adventure she’d asked for, being a murder suspect? Not really.

Introverted yet brilliant (former) accountant Aileen Mackinnon ditched her risk-less life in the city for the village of Loch Fuar, nestled in the picturesque Scottish Highlands. Now she’s the co-owner of her Gran’s inn, Dachaigh, and an amateur innkeeper to ten new guests. But when one of her guests doesn’t turn up for breakfast and the other dangles over the window sill, Aileen finds herself in deep waters, especially with the handsome local detective.

One man show, Detective Inspector Callan Cameron couldn’t be happier— finally a murder, if not two! The only issue- he’s forced to join forces with the new innkeeper in town. What could be more horrible than having a partner? A partner Callan loves to argue with? A partner that gels with his detection style seamlessly?

Between bloody murders and stolen rings, the tension is high, so is the heat. They might not always see eye to eye, but can they agree: whodunnit?

When Murder Comes Home is the first novel in the Aileen & Callan Murder Mysteries based in the fictional town of Loch Fuar in the Scottish Highlands. This nail biting novel will keep you up all night, sleuthing and laughing alongside lovable characters. Ready to enjoy some gore and lots of suspenseful fun? Download this book now!

What Inspired You to Write Your Book?
The Scottish Highlands. I fell in love with the scenery when I visited this region a couple of years ago. So when I thought about a murder mystery, I asked myself: what if a friendly Highland community was struck with murder? How would they react?

How Did You Come up With Your Characters?
I first came up with Aileen Mackinnon, an accountant who leaves her job and the big city behind for a quaint town searching for adventure. It was something I craved to do myself and decided to explore this hunger for the countryside through my characters. As for Callan Cameron, the man is a perfect fit for Aileen. After all, romance makes every book so much more interesting! But he's so much more unique than Aileen realises. They are two peas in a pod.

Aileen cleared her parched throat; she had a bad feeling about this. ‘I don’t know. I was just about to check the fuseboard.’

But Callan pushed ahead. ‘Darn it! Looks like someone’s turned off the switch for the lights.’

‘But the board’s locked behind—’

The lights blinded them for a moment. Aileen opened her eyes to see Callan give her a look. He turned to Jake. ‘Please head over to the library.’

Another set of footsteps came down the hall. John Cook appeared, and behind him came Martha Smith, along with Anne Grant.

John strode up to them. ‘We were in the drawing room when the lights went out.’

Martha nodded. ‘Yes, we thought the power must have tripped.’

Callan regarded them and caressed his beard.

Jake pointed at him. ‘He’s asked us to wait in the library.’

When it was just the two of them, Aileen turned to Callan.
‘Someone turned them off deliberately?’

Callan said not a word. The fuseboard was indeed barricaded inside a locked cabinet. A consummate thief could click the lock open, but he had no doubt that whoever had done it had an entire set of keys. They didn’t need to break in. And only the lights had gone off; the rest of the power had stayed on, so it didn’t seem to be an electrical fault.

‘It’s not a red herring like yesterday’s alarm,’ Callan muttered. His intuition told him something had happened. They were too late.

‘I’m going to knock on everyone’s door. Assemble everyone in the library.’
‘But…’ Before she could argue that she was his partner, Callan was off.
———
Callan knocked on Richard and Samantha Grant’s door first.
He couldn’t hear a thing inside the room, and wasn’t it odd that so many of them were in bed already? He glanced at his watch. It was barely half past ten.

Callan knocked on the door again. This time there was some shuffling before a faint glow of light flickered from under the door and footsteps padded across the room. The door opened slightly and Richard Grant stuffed his face in the meagre crack that appeared.

‘What is it?’ came a sleepy feminine voice he recognised as Samantha’s.

With that he knocked on the next door. But it was already open a crack.

He knocked again loudly, but no one responded. Then the door next to it pulled open.
‘What’s all this hullabaloo?’ Jean Beaulieu’s heavily accented yet irritated voice halted Callan’s knocking.

The door opened farther and an annoyed Louis Legrand stepped out in a jade-silk night robe.

‘Don’t we pay enough to get a peaceful night’s sleep?’

‘Who stays in this room?’ Callan demanded, gesturing to the other door.

‘Ask the innkeeper,’ Legrand growled, muttering curses under his breath.

Samantha Grant cleared her throat. She and her husband now stood in their doorway. ‘As far as I know, it’s empty.’

‘Stay put,’ he repeated to both couples.

Drawing out his gun, he pushed open the door. The room was a dark abyss.
He took out his torch and flashed it around…

Then Callan’s broad shoulders slumped, and he let out a breath between clenched teeth. Death had dipped its claws into Dachaigh again.

Author Bio:
Are you looking to solve murders? Perfect, Shana loves plotting them.

As a debut writer, Shana Frost is in her secret den hatching murders and having a blast with Aileen, Nina and the gang. It's crazy in there…

When not in the den, Shana always has her nose buried between the pages of a fiction novel. After all, the tantalising aroma of a story is far more enticing, especially for a sensitive nose like hers.

Shana’s powerful sense of smell has helped her sniff out fictional murder mysteries and a wide variety of characters.

Occasionally, she finds herself wandering ancient hallways of a castle, or a museum trying to smell the tales these walls effuse.

The traveller Ibn Battuta wasn’t wrong when he wrote, “Travelling – It leaves you speechless, then turns you into a storyteller”