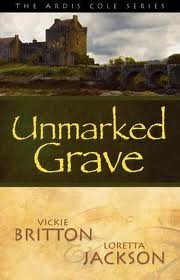 How Did You Come up With Your Characters?
The characters just arose from the setting–a small Scottish town and the inhabitants of an old castle. Bruce McBrier has been called one of our most charming characters. He has a lot of spirit.

Book Sample
“This is the place where I found the skull,” Bruce McBrier said, pointing toward the narrow but deep river that wound through the valley toward the Firth of Tay. “It either washed ashore or was simply uncovered by the recent rains.”

Ardis Cole, who had arrived in Scotland only this after¬noon, suffered from an unusual lethargy, which she attributed to the long hours in flight from Chicago to Edinburgh. She lagged behind, stopping beside the suspension bridge that separated the main road from the grounds of Venwell Castle. Bruce, stocky figure with rumpled jacket and equally rumpled gray blond hair, moved eagerly ahead with surprising swiftness for his girth and years.

“I’m convinced,” Bruce said, hair blowing in the wind as he turned back to face her, “that I have found the remains of our long missing ancestor, Sir William, who would have been the fourth Lord of Venwell. I’m certain the ancient piece of metal found embedded in the skull can be dated back to the 1500s.” Bruce’s look of enthusiasm mingled with a smug satisfaction. “I always knew that he had returned to this castle after the Battle of Flodden.”

“Think of all the wars since then. What makes you so certain that the skull you’ve found is his?”

An excited light glowed in Bruce’s eyes. “Because Sir William didn’t die in battle as was commonly believed. Ardis, I’ve found a 16th century document that proves beyond all doubt that he did survive the war. Where else would he go but here, back to Venwell Castle?”

Bruce McBrier, who had many times visited her family when she was a child, had contacted Ardis only two days ago.”You are one of the finest archaeologists I know,” his voice had boomed into the phone.”Only you can help me solve the mystery of Sir William!” Because of his insistence, Ardis had finally agreed, without, she thought now, her usual cautious preparations and totally without sufficient answers to her questions.

She had flown to Scotland mainly to try to free herself of the grief of losing Blake Lydon. It would soon be a year. Ardis twisted the beautifully crafted gold ring she wore on her forefinger adjoining her diamond, the wedding ring she had planned to give to Blake. Would she ever be able to forget, to become immersed in her work again, to go on as if the plane Blake was in had not gone down at sea never to be seen again?

A sense of extreme weariness washed over her. She brushed back her ash blonde hair that the wind had tousled across her fore¬head and attempted to collect herself.

Bruce’s gaze left her, wandered across the flowing water, and on to where glimpses of a distant castle could be seen through the trees. “Yes, Sir William Venwell returned home—only to be stricken down by one of those treacherous Lloyds.”

“Is that the Lloyd’s castle?” Ardis asked as she joined him at the edge of the water.
“Indeed it is. We are neighbors, but certainly not friends. Even back then, the Lloyds fought for England, backing Henry VIII; Sir William.” Bruce paused to chuckle. “Rather against the family desires, took it upon himself to ride with James IV in defense of Scotland.”

Bruce had left her side and was pacing up and down the shoreline. He stopped suddenly beside a tall pine tree and pointed to the ground, “I found the skull right there.” Bruce, a twinkle in his lively blue eyes, exclaimed proudly, “We are on the verge of solving a centuries old murder!”

“Have you shown this find to anyone?” Ardis asked.

“No one outside the family. I’ve been keeping this relic of history in a special room under lock and key. Of course, eventually, I plan to turn the skull over to the local museum curator.” He stopped again. “But this is my find and I want to be the one to authenticate it. That’s where you come in, my lass. I know you can do a facial reconstruction from the skull, just as you did with those Mayan heads in Central America.” He hesitated, then added hopefully, “We have an excellent bust of Sir William we can use to make a comparison.”

“Hold on a minute, Bruce.” A shadow of doubt creased Ardis’ brow. “I can’t work on a project like this without going through proper channels.”

With a wave of his hand, he brushed away her words. “Wading through reams of red tape is out of the question. Besides I don’t want any of this in the local papers, not until you have helped me prove the skull is Sir William’s.”

“A facial reconstruction might tell us if the person who died here bears a resemblance to Sir William, but it won’t serve as positive proof.”

“Timing is of the utmost importance,” Bruce responded, again carefully side stepping her words as if she had never even spoken. “News of this discovery must coincide with the release of my material on Venwell history. What interest the skull will create! Sales of my book will skyrocket. You know how fascinated everyone is by intrigue, betrayal—murder!”

Murder—the word lingered between them. A human life had met with violent death right at the spot where they stood. That fact hadn’t seemed real to Ardis until her gaze followed the sunken bank line that fell from tangled weeds into brackish water.

“He does belong to us, you know,” Bruce said almost in apology. “He was our hero, a Venwell. Aye.” The slight Scottish burr crept into Bruce’s voice. “Strong enough to resist even his own family and fight for what he believed was right.”
As they began walking back toward Venwell Castle, Bruce’s ardor, which had been momentarily replaced by sadness, returned full force. “I’d show you the skull right now, but it’s almost time for dinner. Morgan will soon return from Denning and will want to meet you.”

Ardis had never met Morgan, Bruce’s older brother, but Bruce’s caustic comments about him made her almost dread the inevitable encounter. “He has a son and a daughter who live here too, doesn’t he?”

“Only his daughter, Gwynne.” Ardis thought she noted some embarrassed hesitation. “Morgan’s son, Edan, is … away at present.” Bruce went on quickly as if he wanted to avoid all further discussion of his nephew. “Gwynne has been anxious to meet you. I don’t know where she went, but she’s around some¬where. The girl is far to shut in here,” he added. “Your visit will be good for her. She needs a friend, someone close to her own age to talk to.”
They followed a narrow road, Bruce still in the lead, walking with his quick, sure stride. They rounded a sharp curve and passed through the wide open gate that was set between two gigantic stone pillars. The full view of Venwell Castle made Ardis feel as if she were passing through a portal of time into a century long past. When she had first seen the castle, the sight had taken her breath away. She felt the same sensation again.

A huge cylinder tower, very smooth and light gray in color loomed high above the front entrance. Ardis noted the ancient markings above the door, the family crest of crossed swords beneath a raging lion’s head, under which in large, clear letters was etched, VENWELL.

When she had thought of the castle while on the airplane, she had expected it to be sprawling, rambling, but its hugeness consisted mainly of height, a magnificent, towering fortress, unlike anything she had ever seen.
Instead of guiding her to the entrance, Bruce led her off on a side path. “Let me take a moment and show you the garden,” he said with pride. He took her past manicured hedges and tall rhododendron bushes laden with purple flowers into an open garden area alive with the brilliant colors of early summer.

In the center of the abundant garden set a stone fountain, as old as the castle itself, where water flowed freely down from a gargoyle like, human face. In the shadow of this monstrosity, Bruce stopped walking and glanced toward her, “As I told you, I’ve been keeping the skull under lock and key.” An odd expres¬sion appeared on his craggy face that Ardis could not quite interpret. He did not speak for a long time. “Strange things have been happening ever since I found Sir William’s skull!”

“Don’t tell me. It’s a haunted skull,” Ardis joked. “And Sir William is trying to get it back.”

“Laugh if you want to,” Bruce said, looking a little hurt. He leaned closer, lowering his voice to say confidentially, “But one night I was certain I heard noises coming from my study near the room where the skull is being kept.”

Remembering Bruce’s unshakable faith in the paranormal, Ardis became serious.
“Venwell Castle is still filled with sorrow,” Bruce said, “just as it was then, centuries ago. And new sorrows attract old sorrows.”

An uneasy feeling began to possess Ardis. She glanced toward the fountain, her eyes locking on the gargoyle. His ugly head inclined forward, as if intent on listening to them.

With absolute sincerity, Bruce went on. “Sir William made an oath to always protect this castle. He swore he would return whenever it needed defending!”

“Why would it need defense now,” Ardis asked cautiously, “in this day and age?”

“Morgan and I—as much as we hate to admit it—are getting on in years,” Bruce replied. “Venwell, and the vast land and power that goes with it, is in danger of falling into the wrong hands.”

Author Bio:
Vickie Britton and her sister Loretta Jackson are the author of over forty novels. They have traveled extensively overseas to find settings for their archaeological adventures– the eight-book archaeological Ardis Cole Mystery Series and the Arla Vaughn Pre-Columbian Treasure Series.
The sisters are also authors of the Wyoming Jeff McQuede High Country Mystery Series: Murder in Black and White, Whispers of the Stones, and Stealer of Horses.

Sign up for our newsletter to find out about great mystery books. Once a month one subscriber will win one book from our site.
Filed Under: Mystery/Suspense/Thriller Series Tagged With: cozy, female sleuth, loretta jackson, mystery, suspense, thriller, vickie britton