You are here: Home / Mystery Books / The Trivial Trials of Matt Mollster by M.D. Metro 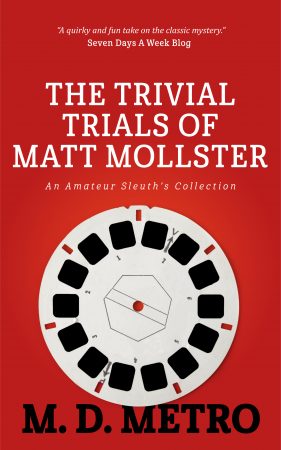 All Three Matt Mollster Mystery Novellas Now Collected In One Place! Plus, Exclusive To This Collection, A Never Before Seen Matt Mollster Mini Mystery!

Meet Matt Mollster: Comic book jockey, perpetual bachelor and aspiring writer in search of a big break. After an abrupt encounter with a forlorn young lady, Matt jumps at the chance to try and come to her aid. Once the young lady goes missing, however, Matt eagerly begins to unravel the mystery, but as he gets closer to the truth, Matt soon finds himself in over his head. Equipped only with his determination and his self-depreciation, Matt seeks out justice the only way he knows how… by channeling pop culture.

But what Matt first sees as a one-time, life altering experience, he quickly realizes is just the beginning, and that his life will never be the same. His quiet, solitary existence as a minimum wage clerk is replaced with random road trips and book signings, tense interviews and crime scenes, maniacal muderers and crafty kidnappers. Only Matt, with his considerable geek cred and stubbornness, can sift through the vague clues and uncover the conspiracies, unmask the truth and unveil the criminals. Doing so will challenge him in ways he never anticipated, forcing Matt to step out from a shadow of self-loathing and connect again, to family, to friends, to romance, to shape a future he dismissed as out of reach. With this new life, however, not only comes a sense of purpose but also fatal consequences if he falters.

Witness the birth of a sleuth with The Nostalgia Crypt, Four Days of PHAME, and Impostors’ Syndrome – as well as the Mini Mystery The Steward Of Solidarity – for these tales truly are The Trivial Trials Of Matt Mollster.

What Inspired You to Write Your Book?
I’ve been a constant consumer of pop culture for as long as I can remember, and while years ago it was niche, now it’s wide spread, so I felt there was an opportunity to break some new ground and provide geek culture a real world hero they could relate to.

How Did You Come up With Your Characters?
I have always been a big fan of Gregory MacDonald’s character Fletch, and I felt there hadn’t been a character like that in fiction as of late. Comedy has always been my go-to, so it was natural for me to envision my sleuth to have observational humor.

Book Sample
As his host returned to her phone call, Matt decided to trek upstairs, his curiosity sufficiently peaked. Everyone says you can know a person by the music they listen to, but I disagree. The movies they like speaks volumes. The stairs were narrow and he tried not to knock over the hanging portraits along the ascending wall. The first room he saw had an old N Sync poster on the door. Wow. I judged her favorably too early. Okay, so yeah, music speaks volumes, too. He stepped into the room, looking for the DVDs Dolores had mentioned. Instead he found three different purses, emptied and laying on top of a bed with a purple and black comforter. To the right a dresser littered with figurines, loose change, half-filled boxes of Tic Tacs and receipts on top. But down in the left corner was a stack of DVDs. Matt crouched down and looked them over. The Princess Bride, Euro Trip, Bride of Chucky, True Romance and Shrek. Huh. All of these are about finding a soul mate. She’s a hopeless romantic with a perverse, twisted sense of humor. I am in love.

Author Bio:
Born during the Old West in 1989, M.D. Metro has had time to watch more movies than the human brain was designed to remember. A former video store clerk, M.D. has made Pittsburgh, PA his home. When he's not crafting the next Matt Mollster mystery, he's debating that age old question: do rocks sleep?

Sign up for our newsletter to find out about great mystery books. Once a month one subscriber will win one book from our site.
Filed Under: Mystery Books Tagged With: amateur sleuth, funny mystery, Geek Culture, M.D. Metro