You are here: Home / Romantic Mystery / The Secrets of Chateau Swansea by R.C. Matthews 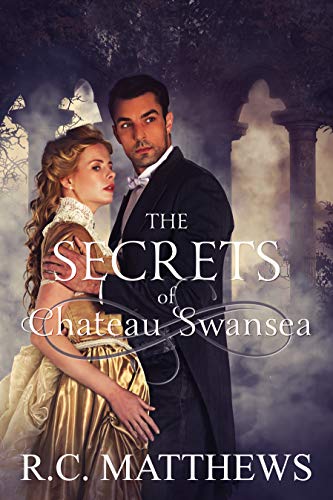 When the hunter becomes the hunted ~

A grisly murder leaves a haunted estate without an heir, and a powerful medium scrambles to find answers from beyond the grave.

Determined to escape the nightmarish memories of her childhood, heiress and psychic Maribeth Sommerset pursues the adventurous life of a psychic investigator, beginning with a murder and the spirits who hover behind at the haunted Chateau Swansea.

Meanwhile, devoted steward of the chateau Arthur Dunn plays a dangerous game of deception to shield his employer’s good name, landing himself at the top of Maribeth’s suspect list.

Amid scandalous secrets and destructive lies, will Maribeth uncover the secrets of Chateau Swansea before the killer strikes again?

What Inspired You to Write Your Book?
My mother loves reading cozy mysteries and I love writing gothic romance, so I married the two!

How Did You Come up With Your Characters?
Maribeth is a secondary character from my Tortured Souls series. She was 12 years old in that series, but she's all grown up now!

Author Bio:
R.C. Matthews is the author of contemporary and historical romances featuring bold, sassy heroines and magnetic alpha heroes. Warning! The chemistry between her characters is off the charts hot, so read at your own risk. She resides in the Midwest and is surrounded by men: her husband and three sons. During her free time you'll find her watching The Walking Dead, reading a fabulous book or hanging out with her family.

Sign up for our newsletter to find out about great mystery books. Once a month one subscriber will win one book from our site.
Filed Under: Romantic Mystery Tagged With: 19th Century gothic romance, cozy mystery, historical mystery, R.C. Matthews, Victorian gothic romance, women sleuths