You are here: Home / Historical / The House of Marchesi by Patricia M. Muhammad 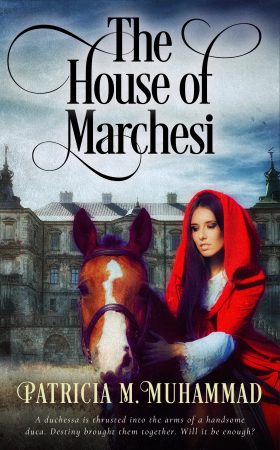 In 18th century Milan, a duchessa is thrusted from her horse and into the estate of another esteemed member of the king’s court. Lilliana is unable to remember her accident or her identity. Duca Emmanuele notices that Duchessa Rosetta is complacent about their daughter’s absence from the House of Montanari. During the duchessa’s convalescence, she and the duca grow in affection towards one another. The maidservant, Noemi of the House of Montanari silently volunteers to help locate and retrieve the missing duchessa. Noemi enlists the help of her fellow maidservant, Gabriella. Noemi leaves the House of Montanari and encounters a proud vendor of pomegranates. He speaks of a tale of a fallen maiden taken into the care of a duca. He guides her to the House of Marchesi. The duchessa finally recalls her father’s identity. The duchessa wishes to learn more of the duca. He introduces her to various quarters of the Marchesi mansion. The king and queen gather evidence and secure it in the royal vault. Alessandro proposes to her. Lilliana accepts. The Crown decides to proceed with the planned royal ball. All of the esteemed of the Milanese king’s court are to attend.. The night of the royal grand affair arrives. Servants of the Houses of Montanari and Marchesi enter with the assistance of a royal servant. In separate royal chambers, the king and queen officiate Duca Alessandro and Duchessa Lilliana’s nuptials. Duca Emmanuele is right to be concerned for his daughter, for someone has conspired a dastardly plan against the duchessa, but who? The king and queen have the answer and reveals it before the entire king’s court.

What Inspired You to Write Your Book?
Italy is a country that I have always wanted to travel to and visit. I wish to see the early architecture, including frescoes, the preserved waterways and some of its art. These are some of elements which permeate The House of Marchesi and assist Duca Alessandro and Duchessa Lilliana figure out where exactly she belongs–and it is with him for eternity.

How Did You Come up With Your Characters?
Duchessa Lilliana and Duca Alessandro are protagonists. She just happened to be involved in an accident while riding the horse her father gifted to her. Here we know that she is generally skilled with horses. Yet, as the reader steps into Lilliana's mind, the mystery of who she is develops as she recovers. Whoever she was before the accident evolves as a result from it. Duca Alessandro is handsome, strong and caring. He also has a since of duty to this beautiful maiden who is now under his care and authority. I knew that he had to be a strong character with the ability to balance safeguarding his gifted treasure, exercising due authority within The House of Marchesi and respecting Lilliana's father though he does not meet him until the near end. Nonetheless, all of these traits encourage the servants to toil just as much as he in order for both the duca and duchessa to be safe–and for them to have the future that Providence had already decreed for them.

Book Sample
"You have quite the tendency for unfortunate events." Duchessa Lilliana heard a voice. It was that of a man. A gentleman she presumed. A handsome courtier stood over her. The duchessa was correct. "Do I dare give you advice mademoiselle, while you lay in this unfortunate state before me?" The duca crouched at her left side with his feet only two paces apart. He rested his forearms on his thighs with his hands clinging to one another. The duchessa swallowed.

"He is but a figment of my tossed mind, a wonderful one at that," she whispered. The duca smiled until he noticed that her eyes began to fade away right before his sight.
He leaned his left arm over her and placed his right ear near to her nose and mouth. He could hear her breathing. A few of his houseservants and another gardener finally approached. Duca Alessandro moved away and stood.

"Is she…?" The servant lowered his head and only partially raised it again. He quieted his voice in solemn sincerity. "My lord, is she…?"

"She lives." Alessandro looked to the one gardener who gathered several blankets and used his body to help catch her. "…and you have done quite well." Her rescuer nodded once. "Shall we remove her to the manor?" Several of the servants quickly gathered her, still using the blankets as a cushion.

"Here…here. These bedchambers are best," Duca Alessandro said as he escorted them from behind. "Remove the blankets and take them with you." He watched as they quickly pulled some from beneath her. She rolled partially onto her right side. "Carefully. She may be alive, but injuries likely persist." One of the maidservants waved the others away as she completed the task. Then she looked woefully at the duca. "The maiden is only in shock." The servant nodded to appease him, but she did not believe much hope remained for the duchessa. Lilliana still laid on her right side, her left leg folded over her right at the ankles the most. The duca understood the maidservant's doubt, but he possessed none. "I will set her aright." After their careless removal of the coverings, Duca Alessandro resigned himself not to trust any of them with such care again. "All of you, leave from here at once…and you, have the cook prepare coffee and fruit and bring it to these quarters." They all turned away while the one he directly addressed nodded.

"Si, mio signore," she said. The maidservant carried the other blankets tucked under her right arm. She believed, however, that it was Duca Alessandro who bore the
heaviest burden-the premature death of a beautiful young maiden. "Che vergogna terribile. Potrebbe essere stat sua-por sempre." The duca still heard her as her voice trailed off.

"Now I must perform what I have requested of them…" the duca said. He held his chin with his right hand. Finally, he heard the door close behind him. Alessandro went to the other side of the bed. He leveraged his body on his fists which he bore on the bedding. The duca listened for her breaths again. "She is still viable." He still thought of the best way to sit the duchessa up. She began to sir and tried to hold herself up with her left hand. A futile attempt. Lilliana plopped against the luxe coverings. The duca rushed to assist her. He realized that her sleeves were torn. His hands touched her skin. It was soft. He first lifted her head. Her eyes kept closed again. "This cannot be good." She tried again, still with closed eyes. "Take ease, mademoiselle…" The duchessa heard an enchanting, deep, voice. 'Could it be the same of handsome grace which hovered over me from before?' Lilliana thought. The duca used the side of his body to steady and gently lift her. He watched her neck which she held on her own. Duca Alessandra was finally able to have her rest against her back. Duchessa Lilliana wobbled her head from left then to the center. She saw his face again.
"Do not lay so hard, dear maiden." Alessandro raised his right hand against the side of her face. "You are quite…" He lowered his head. "…so beautiful." The duchessa thought she was still delirious. She leaned her head towards his cupped hand. The duca felt the weight become heavier. "No…no, mio bella." He gently guided it back towards the pillow. Alessandro could see the shadow of a servant against the wall. He wanted to remove his hand. It was no longer a burden. The duca refused to leave her bedside but only turned to see which of the servants was at the bedchamber's door.
"Send word to the nearest physician. There is no time for telegram. Have the butler instruct the coachman. The House of Marchesi calls upon him." She quickly acknowledged Alessandro and excused herself. The duca looked again at the fallen duchessa. "All you can do is rest, bella." Lilliana struggled to open her eyes again.
"Do not…please." She would not listen. The duca moved closer. Her eyes opened. The duchessa smiled.

Sign up for our newsletter to find out about great mystery books. Once a month one subscriber will win one book from our site.
Filed Under: Historical Tagged With: 18th century, connivance, duchess, duke, historical fiction, historical romance books for adults, historical romance releases, Milan, Patricia M. Muhammad, pmmuhammadbooks, sweet romance, The House of Marchesi