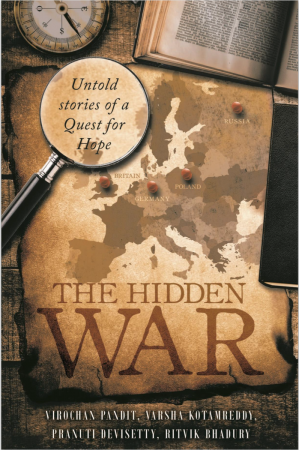 “The Hidden War” explores the experiences of 4 characters navigating their way through the Second World War. The book is a historical fiction based on the idea of “What if the countries in World War II war pitted against each other?”. It looks at the idea of a civilization, at the core of the Earth, trying to manipulate humanity after the horrors of World War I through the eyes of spies, prisoners, and even butlers.

What Inspired You to Write Your Book?
We thought that there had to be something hidden beyond the tale that everyone is told. The tale of World War II. And this something happened to be the untold stories of the World War.

How Did You Come up With Your Characters?
We put ourselves into the shoes of people living through the World War. People from incompetent butlers to skilled spies. And soon, we ended up with stories that we wanted the world to hear.

Book Sample
As he approached the bridge over the Spree, he was able to see the top of the Reichstag. Much to his despair, this would be his first and last time seeing the magnificent building.
As he got closer, he realized that there were no soldiers. No guards. No security.
‘Why would the building have no security?’ wondered Tom.
And then he heard shouting in the distance.
‘A distraction,’ he thought.
He hastened his pace. Once he got to the front of the building, he got to work. He fashioned the aluminum into two rectangles with a protruding curve. He jammed the two pieces of metal between the shackles and the brass casing. He wiggled them, waiting for the lock to click. No sound. He tried again with more force. Apparently, he had forgotten how strong German locks were.
He unscrewed the base of his brass hammer to produce a small awl. He jammed it into the lock where the key should have gone and moved it around vigorously until he heard a click. And another.
However, the lock did not budge. He took out the brass hammer and gave the lock two swift blows before trying again with his knife. He repeated this another two times without a care about the sound.
Suddenly, a blast of hot smoke knocked Tom to the ground as he heard a thunderous explosion and the shattering of glass. He looked up to see clouds of red and orange fire with black smoke pouring into the surroundings.
‘Is this it?’ wondered Tom. Tears flooded his eyes, blurring the fiery painting in front of him. He did not want to die here. Not yet. The dark, sulfurous smoke surrounded him as Tom struggled to get up on his feet. Another loud explosion came, this time accompanied by blue ribbons of fire that reminded him of a cruel version of the ‘Starry Night,’ until he realized that they looked more like a sentence. That was Tom’s last thought as the ornate marble facade crumbled, engulfing him in darkness.

Author Bio:
We always knew we loved writing but we didn’t know where to start until 8th grade when we decided to start the journey of writing our book with the help of Pramit Sir, our English teacher. Although he left when we were in 9th grade, we continued writing the book. In the beginning, we were clueless. But once we found our path, the journey was amazing. We each have different interests from art to music to sports, but our book is a masterpiece combining the unique aspects of each of us.

Sign up for our newsletter to find out about great mystery books. Once a month one subscriber will win one book from our site.
Filed Under: Historical Tagged With: Pranuti Devisetty, Ritvik Bhadury;Crime;World War 2; Concentration camps; Military fiction; Spy; Fantasy; Europe 1945; Supernatural; Romance; Thriller, Varsha Kotamreddy, Virochan Pandit