You are here: Home / Police Procedurals / The File on Thomas Marks by Bentley Turner 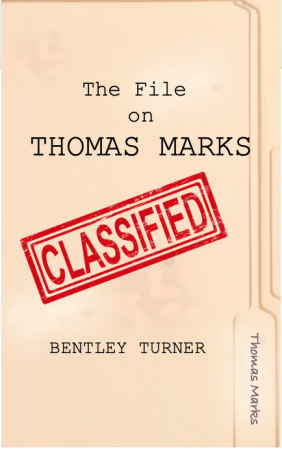 This suspenseful thriller features Thomas Marks, a young, intelligent man who admits to being with two women shortly before they were murdered. Though the detectives don’t believe him, he claims he’s innocent. The problem is none of the evidence corroborates his story nor confirms the guilt of anyone else. When another suspect surfaces, Thomas thinks he’s in the clear, but appearances can’t always be trusted. Will an arrest stick? Find out in this mystery of twists and turns that will keep you guessing until the end.

What Inspired You to Write Your Book?
I have been reading mysteries most of my life. Although I wrote fiction when I was an undergraduate (I enrolled in several writing courses), I switched to writing nonfiction primarily because of my professional career. When I retired I thought I should try writing fiction again. So I wrote a mystery primarily because I wanted to find out if I could. Besides, I had read numerous mysteries over the years and enjoyed the genre.

How Did You Come up With Your Characters?
I knew the major suspect had to be young, intelligent, well-educated, and from wealthy parents. His father had to be a doctor or a specialist. His mother had to be a homemaker. I knew at least one of the women in his life had to be a few years older and wealthy. However, she had to be divorced. I knew at least another of the women in his life had to be his age or a few years younger. Although she was not wealthy, she had to have a solid professional career. At least one of the two detectives had to be relatively new in homicide. The other had to be slightly older and more experienced in homicide. Although it may sound like I knew each character inside and out, this is not the case. I had ideas for these characters, but fleshing them out took time. In fact, I probably added more about each with every draft.

Book Sample
“Thomas.”
He noticed that her dark brown eyes were fixed on him. “Yes?” he asked.
“Do you like me?”
“Yes. You know I do.”
“Do you like being with me?”
“Of course. We have fun.”
“But I am older?”
“You are? Why didn’t you tell me?” He laughed.
She nudged him in the ribs, but she didn’t say anything.
Marks reached for her hands and glanced at her fingernails, which were manicured once a week. He looked at the light veins on the backs of her hands. Then he kissed them. He glanced at her face and noticed a smile. He leaned toward her.
“You want to know something?” he finally asked.
“What?”
“I enjoy being with you. In fact, I think I’m falling in love with you.”
She didn't say anything.
He moved closer to her and kissed her lips.
When they parted, she leaned back against the couch. She looked at him and smiled. “That was nice,” she finally said.

Author Bio:
Bentley Turner, a pseudonym, has written several short stories and numerous poems that have been published in literary journals and anthologies. Under his legal name he has written numerous articles for academic journals, chapters for academic and scholarly books, entries for encyclopedias and other reference books, and several books of nonfiction for the academic and reference markets.

Sign up for our newsletter to find out about great mystery books. Once a month one subscriber will win one book from our site.
Filed Under: Police Procedurals Tagged With: Bentley Turner, mystery, police procedural, suspense, thriller