You are here: Home / Mystery Books / The Death of Knowledge by Lou Collins 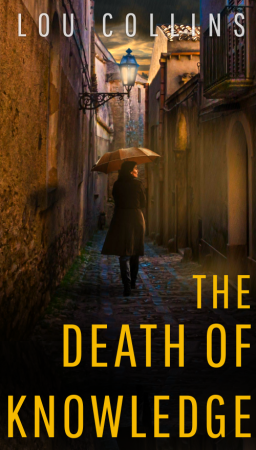 Born into servitude, Quill relies on the Master for everything. But when they uncover a body, she’s sent away from the only home she’s ever known. Forced to serve the corpse’s widow, she discovers a world of power and prejudice, secrets and lies, a world she doesn’t recognise.

Meanwhile, in the City Guard, Deputy Red set out to be a trailblazer, a rebel. At least that’s the story he told himself. Imagining a career of action and intrigue, what he didn’t bank on was zero crooks and the boss from hell. Excited by the prospect of a case, Red must choose between following orders or trusting his instincts.

When the finger of suspicion points perilously close to home, Quill and Red’s paths cross with disastrous consequences. And as the quest for justice reaches its climax, both have to make choices that change their lives forever.

Perfect for armchair sleuths, The Death of Knowledge offers an exciting twist on a traditional murder mystery, keeping you guessing until the very last word.

If like me you are a keen sofa sleuth then this is a must read. From the very start I felt transported to Scolaris and felt determined to solve the mystery. However, thankfully as it is a cleverly written I was kept guessing until the end.
Collins writes with genuine creativity and intensity that draws you in and keeps you hostage! I would not hesitate to recommend this book.” ⭐⭐⭐⭐⭐, Ruth N, Goodreads review

“A fantastic debut novel!
A friend recommended this book to me, and it was a winner. This unique story is based around the fictional city of Scolaris, which is split up into five sectors and where knowledge is king. When someone is murdered in the city, Quill and Red take it upon themselves to search for the truth. The writing style is unique and flows well, and the character development is spot on. If you’re an armchair sleuth and enjoy a good murder mystery, you’ll adore this book.”, ⭐⭐⭐⭐⭐, Thrillerseeker, Goodreads review

“This was a really unique take on the cozy mystery novel, the storyline was unique and different. The characters were interesting and I enjoyed going through this read.” ⭐⭐⭐⭐⭐, Kay M, Booksprout reviewer

“Are you seeking a new, sink-your teeth into, dystopian/futuristic fiction read to get into? For me, this ticks so many boxes and is like a perfect mash-up of like Handmaid’s Tale meets Noughts & Crosses meets The Northern Lights Trilogy meets a really good whodunit.” ⭐⭐⭐⭐@reading_in_the_fast_lane, book blogger

What Inspired You to Write Your Book?
At the time I wrote the book theatres and the arts were shut because of the pandemic. I wondered what it would be like to live in a society where the creative arts were thought dangerous and thus against the law. From this spark of an idea it wasn't difficult to envisage circumstances in which the affected citizens might choose to flout the law with deadly consequences!

How Did You Come up With Your Characters?
When I write I see the scene in my head, as if I'm looking down on the action from above. The characters appear naturally as part of that process. Then I flesh them out by thinking about their strengths, weaknesses and flaws.

Gaia was an artisan, a collector and connoisseur of exquisite things. Living or dead, before that moment it had never mattered. The latest collectible lay frigid in the dawn air, beautiful despite its imperfections. Gaia had surpassed herself on this occasion, fascinated by the beauty before her. So much so that it consumed every waking moment. Intoxicated, she longed to explore every inch of translucent skin, clutch each strand of hair and smooth out the plain brown tunic pressed against those faint soft curves. The artiste surrendered, caressing silky bare soles, her breathless body craving the rising heat. Perfecting the technique had been far too challenging. But, at long last, they found the exact formula. It was a pity that the personal cost to produce the chemical was so high. Never mind, it was worth it.
It was all but impossible to tear herself away from those almond-shaped eyes, cut-glass-blue interspersed with minute flecks of jet black, catching a glint of her own reflection. Not a single crease or sign of age was visible, and an upturned look of transcendent joy proved beyond doubt that the serum worked. At the last second of living, the soul glimpsed its innate creative skill, and the perfect face gleamed with that epiphany.

For centuries the City of Scolaris worshipped the pursuit of knowledge, at the expense of everything else. That needed to change. They would see the reality of what was missing from their miserable existence. Her lip curled, mind recoiling, remembering the loose ends still to be tied. Gaia battled the anger and frustration, cutting them down, whimpering into submission. The plan’s success demanded, more than ever, a focus on the end goal. Emotions only hindered progress, and that was unthinkable. Feeling the shape of her mouth, she stretched her ruby lips upward, forcing a smile. There was still time. It could wait a few moments more.
Like a scavenger, Gaia returned to the object at her disposal, sighing and slipping its feet inside the crimson slippers. As she caressed its auburn tresses with great care, she plaited them between nimble fingers and sang. The brooding tone echoed around the abandoned building as the universe paused and listened to the melancholy refrain. A song lost for generations.

Pleased with the work, she finished weaving the lengthy strands. And, taking a ribbon from her own neck, secured the tips of the braid and laid it flat against the creature’s collar bone. Gaia lit up, stooping little by little to kiss the raised edges of the teardrop scar at the base of the décolletage. She inhaled hard, greedy to enjoy the plain soap fragrance of it, though it was becoming more difficult to ignore the hint of something rotten. Ironic how such an enchantress presented itself from such a low source. She glanced at the others; they were more typical of their class, but they had played their part.

As sunlight broke through the cracked windowpane illuminating Gaia’s water-colour grey eyes, time ran out. She vowed never to return to this place unless granted an opportunity to restore it to its former glory. It would only be a matter of days or weeks before it revealed its secrets. She had required many deaths in her lifetime, but none wounded the psyche in so cruel a fashion. This first paper-cut of grief festered and might never heal.

The girl in the blood-red shoes, hair fixed in a plait, adorned with a matching ribbon, lay dead. A servant in life. Now she served Gaia, a new mistress in death.

Author Bio:
Lou Collins is a wife and mother to two incredible teenagers and lives in the beautiful East of England. In her life B.C. (before children!) she practised as a solicitor, specialising in litigation. Her career satisfied her passion for words, for medical matters minus the gore and for winning arguments!

In a quest to find herself again, she has returned to her love of words and writes mysteries for armchair sleuths who love devilish whodunnits.

Lou draws inspiration from her legal background, and traditional mystery writers such as Agatha Christie and Sir Arthur Conan Doyle to pen fast-paced plots that keep you guessing until the very last word.

Sign up for our newsletter to find out about great mystery books. Once a month one subscriber will win one book from our site.
Filed Under: Mystery Books Tagged With: clean mystery, cozy mystery, crime, Lou Collins, murder mystery, small town, women sleuths amateur sleuth