You are here: Home / Cozy / The Broken Bridge: A Succulent Sleuth Cozy Mystery by Iris Marach 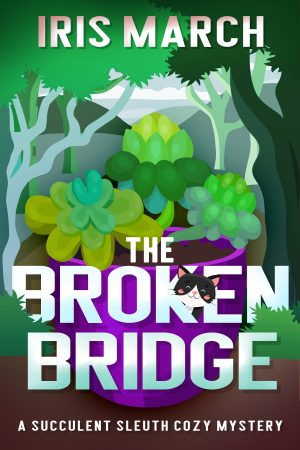 An abandoned backpack. A damaged walking stick. A broken bridge. What happened on the Buckeye Trail?

Succulent-savvy sleuth, Molly Green spends her day tending her eco-friendly garden center, inherited from her beloved grandparents. She wants nothing more than to nurture her nursery and share her plant passion with the world.
When a hiker goes missing on the Buckeye Trail that runs behind the garden center and a bridge on the trail is damaged, the police suspect foul play. As clues mount up, Molly fears she may know who is to blame, perhaps someone in her own family.
To make matters worse, Molly must navigate the inconvenient appearance of a loquacious colleague, pulling her from her path to uncover the mystery of the broken bridge.
Can she discover what really happened that day on the trail? Or will the spikes and thorns surrounding this mystery take Molly out as well? Find out in the first book of the Succulent Sleuth Cozy Mystery series, The Broken Bridge.

What Inspired You to Write Your Book?
I love cozy mysteries and hiking. I also love plants but tend to kill them most of the time. I wrote a book that brought the three together!

How Did You Come up With Your Characters?
My sisters both have kids that are twins. When I started writing my main character, Molly, she was a singleton but then became a twin a few chapters in.

Book Sample
Prologue
It had rained the night before, so the Buckeye Trail was soft. Brooks ran this stretch of trail regularly and knew where the puddles would be and which roots would be especially slippery, making them dangerous. He often ran after work, which helped him mentally divide his time at home from time at the office. Running had always been a blissful stress reliever for him and now was also a way to drown out sorrow. He listened to fast-paced rock music to help him keep a quick, steady cadence.
On this particular day, Brooks was running out and back on the same section of trail. Sometimes he asked a coworker to drop him off at one trailhead and parked his car at another to make a straight run. Today, Brooks looked forward to the waterfall that he’d get to see twice.
Brooks pushed himself to try to beat his normal time for this route. He didn’t expect to run faster than he ever had before.
Brooks ran hard on the first leg of his run. He was satisfied with his time and took it easy as he turned around and ran back toward his car. Within the second mile, right after the waterfall, he noticed something different. Brooks spotted a red backpack on the edge of the trail, behind a tree without its owner in view. Was it abandoned? He had not seen anyone else since he passed this spot the first time. He considered that perhaps a hiker was “using the facilities” farther off the trail and put the pack out of his head. Brooks let his mind wander and looked up at the leaves moving in the breeze. He noticed that the shadows of oak leaves were slightly different from those of maple tree leaves. Nature was such a wonderful healer.
When he turned his attention back to the trail, Brooks spied a polished walking stick just off the trail. It was broken into two jagged pieces and had definitely not been there when he ran past that spot not even a half hour ago. He stopped and picked up the longer piece, inspecting the smooth, glossy wood. He looked around and searched for another person within the forest. Again, there was no one around. What could he do to respond to this discovery? Who would he report this to? Why was it broken? Brooks’ heart rate was already up from exercising, but he felt like someone was watching him and he itched to move on. Had anyone been there, he would have stopped to help them, but now he left the walking stick and ran on, wondering what actions to take.
Near the end of the trail, Brooks found himself on the familiar truss bridge over the river. He’d always loved the noise that his feet made as they pounded the wood mixed with the river’s happy gurgling. Thwomp thwomp thwomp. His eyes were on the water: the swirls of the eddies and riffles were mesmerizing. But halfway across the bridge, Brooks stopped in his tracks. The bridge supports were cracked. Part of the railing was broken clear through. And there were splatters of wet blood on the trusses. The bridge had been whole and clean when he had plowed past that exact location, arms pumping hard. He turned around, looking for someone else, anyone. What happened here? Were the abandoned pack and the walking stick related to the damage and this grisly scene? Brooks jogged to the end of the bridge to get away from the gore and immediately called the authorities.
“Nine-one-one. What’s your emergency? This is Stacey,” a woman said on the other end of the line.
“My name is Brooks Thompson. I’m on the Buckeye Trail in Hawthorn Heights, and the bridge over the river is broken and there’s some fresh blood.” He stopped speaking for a moment because he couldn’t catch his breath. “I found a backpack and a broken walking stick abandoned farther up the trail. Someone is in trouble, I think.”
“Are you in danger, sir?” she asked.
Brooks looked around and saw only trees and underbrush. Birds chirped. It was a sunny, pleasant afternoon. “I don’t think so.”
“We can send a police unit to the scene. Tell me your location.”
“I can meet the police at the Buckeye Trail trailhead off of Main Street,” he said.
“Can you tell me your precise location, sir?”
“Uh, I don’t know the address for the trail.” Brooks didn’t know how to tell the dispatcher where he was. “I’ll just meet them at the garden center. Patty’s Plant Place. The parking lot is connected to the parking lot for the trail. It’s also on Main Street.”
“I’ll send a unit right away.”
And then Brooks finished his run faster than he expected, faster than he had ever run that route. He ran away from the violence that happened and toward the help he could provide.

Author Bio:
Iris March has a reputation for killing house plants and now she’s killing people off in books? Coincidence? Perhaps not. Iris has spent two decades working in the sustainability field and is usually either reading a book or on a trail. She lives in Ohio with her husband, son, and three cats.

Sign up for our newsletter to find out about great mystery books. Once a month one subscriber will win one book from our site.
Filed Under: Cozy Tagged With: cozymysterseries, cozymystery, cozymysterynovel, gardencenter, hiking, hikingtrail, irismarch, succulentsleuth