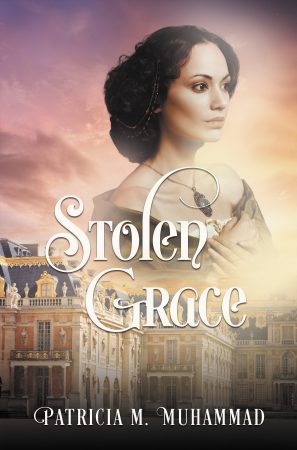 Penelope Moreau is a Creole courtier in 18th century Versailles, France. She searches frantically for a paper containing a clue as to who actually committed the royal theft. Once this is proven, the evidence would refute her brother’s, Armand’s, alleged complicity in the crime. Pierre LeMercier is also an aristocrat of the king’s court and is fascinated by Penelope’s beauty and intrigued by her feigned lack of interest in him. Penelope and Pierre’s courtship blossoms. Pierre vows, as well as Count Alexandre Montegeau a friend of Penelope and Armand’s parents, to exonerate Armand, restore the House of Moreau’s name. Pierre and Penelope hope to be wed when the matter is settled.

What Inspired You to Write Your Book?
Most historical romance novels are set in the Regency period in England. Stolen Grace is my first historical romance novel set in France. Although I briefly visited the country many years ago and observed some of its architecture, the history of war and diplomatic relations plays a subtle role in the establishment and recognition of the House of Moreau before the king's court. What inspired me to write Stolen Grace was to use this history as the catapult in understanding why Penelope's brother, Armand was so easily accused of the royal theft by others of the gentry.

How Did You Come up With Your Characters?
I usually include in most of my books multi-racial characters and/or interracial relationships. I needed to find a plausible explanation of a multi-racial aristocratic house of the king's court during the 18th century, Versailles, France. I did some cursory research on France's relationship with other countries and how the royal family recognized or extended regal ties with its own king's court. This formulated the basis of the House of Moreau, a family of Creole courtiers. From there, I wrote what is likely presumable between brother and sister, banter, clashes of authority and if they were raised properly, a subtle need to protect each other. External of the Moreau house is Pierre LeMercier. In the beginning I had yet to decide what sort of handsome gentleman he would be. Yet, when he introduces himself to Penelope, I needed to find a link between these two strangers. Penelope's need to exonerate her brother, coupled with Pierre's nearly instant interest in Penelope provided the necessary variables to accomplish this. This is the beginning of how Pierre displays his fondness for her. When they become better acquainted, Pierre takes Penelope on outings and his affection for her increases. He is astute, patient and kind, but he is also stern when necessary–as Penelope sometimes need this counter to balance her wit and stubbornness.

Book Sample
It was the horizon of the French Enlightenment in which Armand took great comfort in those articulate men who preceded him. Her brother's beliefs about man and prestige were congruent with the philosophy of François-Marie d'Arouet, one of the leading laureates of that period. He sought reassurance for his views from those poets he considered articulate, the great philosophers who found humility to admit when in error; and those insightful masters of knowledge who were so profound that the simplest explanation could conquer the most arduous minds. Armand stayed up later than usual, reading a book by candlelight. He sought comfort in those words of dead men, hoping that he would not be one of them soon. He considered his father, stoic and proud, yet sensible and practical. Armand was to implement these characteristics as an unpredictable strategy to defeat whoever sought to destroy him. Whoever was targeting him was also aiming their vitriol towards the Moreau patriarch and that, he could not tolerate. If only their words could thrash through the haze of lies that nourishes man's need to relish in another's folly whether conjured or actual.
The next morning Penelope readied her day. As much as she and her brother enjoyed presenting themselves as paddlers against the tide of French opulence, she did perform similar dressing rituals in the morning. The Moreaus were still wealthy and to ignore such a custom would be considered a social travesty. Her maiden prepared her elaborate Service de toilette and assisted her to powder her face, use of parfum, and the layers of dress she must undertake to present themselves beyond the chateau. However, Penelope refused to have a coiffure and decided the maiden was proper to fulfill this role for her. A couple of hours passed before she accepted any calling cards. However, her day was interrupted by the servant who rushed to her side, waving parchment from one side of her to the other.

Sign up for our newsletter to find out about great mystery books. Once a month one subscriber will win one book from our site.
Filed Under: Historical Tagged With: Creole, historical fiction, historical romance new releases, historical romance novels, love story, Patricia M. Muhammad, pmmuhammadbooks, royal theft, Stolen Grace, Versailles