You are here: Home / Cozy / Smokes of Death Beer by Shana Frost 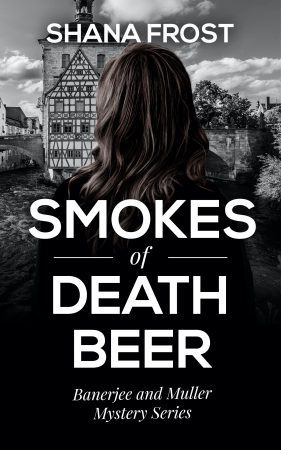 A town known for its smoked beer. What if this pint is your last?

Nina Banerjee wants to enjoy medieval architecture, history and Rauchbier in the charming town of Bamberg in Bavaria. But when she stumbles upon the dead body of a man she just shared a beer with, things take a turn for the worse.

This quaint town, with its half-timbered houses and touristy attractions, is not all that safe. It’s a playground for criminals, who run riot with murder on their minds.

What will Nina do? Will she sit still as Detective Robert Muller labels her a prime suspect, or will curiosity get the better of her?

What Inspired You to Write Your Book?
Bamberg did! The book is set in this picturesque city in Germany. The enigma surrounding Bamberg and it's rich heritage made be think: what if a tourist stumbled over a dead body whilst roaming these cobbled streets?

How Did You Come up With Your Characters?
The character of Nina Banerjee shares my own hobbies: history and solo travelling. She is ethnically Indian, like me. Detective Robert Muller is an enigmatic character, someone you want to spend time with and yet be a bit sceptical about. The two make a fabulous sleuthing duo. And they fit in perfectly. Nina and Muller grew as I put pen to paper and are now my best pals.

Book Sample
The dark brew swirled around her tongue, making her nostrils tingle at its smokiness. Rauchbier, German for smoked beer, was not to be missed when one sat at Schlenkerla, the famous brewery in the medieval town of Bamberg.
For six generations, the tanginess of smoked malt had smattered the air inside of this dark-timbered pub. Tourists milled about, all here for a taste of the revered Bamberg beer.
Just as Nina raised her pint, two gentlemen huddled over.
“Good afternoon, miss. Might we take a seat? Everywhere’s full and I’m afraid my legs aren’t as strong as they used to be.” The stout old man bowed his head.
Nina grinned, her hazel eyes twinkling with mirth. “Of course. This labyrinth of cobbled streets makes my young bones quaky as well!”
The man laughed, gesturing to his friend as he pulled back a rickety chair.
She tucked a few stray light brown strands behind her ears. The curiosity germ in Nina discretely assessed the two. Both in their seventies, their old faces were wrinkled and flushed pink. While one gentleman was stout yet tall, the other was short and too lean, as if he were just a skeleton with skin.
Someone shouted behind them, and glasses clinked as a waitress thudded two Rauchbiers down in front of them, sloshing the brown nectar over the rims to join the ancient stains on the wooden table.
The white-haired gents savoured a sip, talking to each other in soft tones. The noise in the room was so overpowering, Nina’s curiosity couldn’t be satisfied. Out of the corner of her eye, she peeped at them. What an odd pair. They couldn’t be friends.
The thin one didn’t speak, just listened and grunted. The other one was the more energetic of the two. He gestured, bobbing his head. They didn’t seem to share any hilarious jokes, as old buddies might; in fact, they never even made eye contact.
Balancing her head on her hands, Nina surveyed the room. If not for the clothes of the tourists, she could have been in a medieval townhouse. Thick timber beams ran overhead and the stone walls kept the room cool, just like in a fortress. The waitstaff was dressed in the traditional German dress, dirndl.
Swallowing the last gulp of her smoked beer, Nina titled her head back to the gents and stopped short.
Had the fat man snuck something into his colleague’s coat pocket?
Nina pushed the thought away; perhaps old age played with people’s minds. She stepped outside into the nicotine-filled air, its grey haze putting her on edge…

Something wasn’t right. She couldn’t put her finger on it but the queasiness in her stomach made her uneasy.
This wasn’t her first solo trip, so what was putting her so on edge? It definitely couldn’t be the beer; she’d had just one pint.
Nina peeked over her shoulder. Why was she so paranoid? Shaking the odd thoughts from her head, she made her way towards the grand Bamberg Cathedral, resplendent with its tall spires and old Romanesque charm. As the clock struck the hour, the church bells doused the cobbled streets of Bamberg with their rich chiming. The Neue Residenz sat beside the cathedral, atop the tinier medieval establishments.
Nina took in the open landscape and the small alleys that interspersed it, and ran off down the hill into the hustle of the old town, untouched by the devastation of the Second World War.
The air was light, and so fresh Nina had to stop and take a deep breath. She chuckled at the uneven texture of the stones beneath her feet. It was going to be a marvellous holiday.
Wandering with her camera, she crossed over to the cathedral, admiring its imposing structure. Hoping for a better shot, Nina backed down the street until an alley begged her to explore it. Humming to herself, she ambled through, admiring the old bricks of outer walls. The spirits of the past were the only inhabitants of this alley… or so she thought.
Nina stopped short.
It seemed that the spirits of the newly dead were among them as well.
Just skin and bones, she had described him so, and now he hadn’t a soul, just the spots of blood that painted his grey coat, and an antique dagger jutting out from his heart. Dead eyes gaped at her, blood matting the pale face. Nina stared in horror at the scene in front of her. No, this wasn’t her first solo trip, but it was the first where she’d tripped over a dead body…

Author Bio:
Are you looking to solve murders? Perfect, Shana loves plotting them.

As a debut writer, Shana Frost is in her secret den hatching murders and having a blast with Aileen, Nina and the gang. It's crazy in there…

When not in the den, Shana always has her nose buried between the pages of a fiction novel. After all, the tantalising aroma of a story is far more enticing, especially for a sensitive nose like hers.

Shana’s powerful sense of smell has helped her sniff out fictional murder mysteries and a wide variety of characters.

Occasionally, she finds herself wandering ancient hallways of a castle, or a museum trying to smell the tales these walls effuse.

The traveller Ibn Battuta wasn’t wrong when he wrote, “Travelling – It leaves you speechless, then turns you into a storyteller”