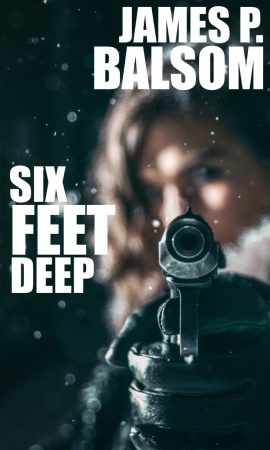 “From the bridge, the riverbanks stretch into the distance, narrowing, until they pinch and close, succumbing to forest. The sun is low and cold; mist lifts from the water. It is somewhere there, along that stretch, that the body is buried. I don’t know where. To be frank, I don’t care.”

From dark Buffalo streets to the dockyards of Eastern Canada, these gripping noir tales embed the reader in the gritty world that exists beneath the pristine beauty of a winter’s night.

In Six Feet Deep, the line between right and wrong isn’t just uncertain – it doesn’t seem to exist at all. With femme fatales, anti-heroes, and dirty cops, this slim tome is Balsom’s modern answer to Raymond Chandler, Humphrey Bogart, and Rita Hayworth.

What Inspired You to Write Your Book?
To produce a contemporary cycle of pulp fiction. E-books are the dime novels of the twenty-first century. A dark night in the north establishes a perfect contradiction of unsettling beauty. Snow muffles but the hard winter air amplifies all. Pristine white banks accentuate droplets of blood. With the thaw, long forgotten tales emerge.

How Did You Come up With Your Characters?
The characters are drawn from the real people who populate our cities. They are gritty, honest, and deceitful. They are beautiful and ugly. They love and kill.

Book Sample
In Saint John, sunshine was rare. When day broke, the sky turned grey and light glared through to front steps where people huddled and smoked, to dockyards where people worked, to park benches where people slept. In the peripheries – the east and west – people sat in breakfast nooks and morning rooms, and maybe the sun shone there, rising over pine-crested cliffs and frozen bays as bacon sizzled in the pan and accounts were discussed, as affairs ended in lawsuits and bitter resentment rather than fistfights and broken windows. But, in the heart, Saint John woke when the light shifted and darkness retreated behind the clouds, distant but ever-present, looming over the uneven rise of flat-top buildings.

Sign up for our newsletter to find out about great mystery books. Once a month one subscriber will win one book from our site.
Filed Under: Detectives Tagged With: crime, detective, James Balsom, mystery, noir, Northern, pulp, thriller