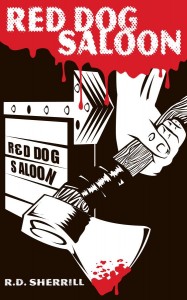 Six men commit an unspeakable act during the foolishness of their youth while at a country bar. Twenty years later, long after the Red Dog Saloon has burned to the ground, someone has come back for revenge. Now they fear for their lives as the mysterious reaper takes them one at a time. Meanwhile the county sheriff is trying to unravel the mystery of why his normally quiet town has become a killing field.

What Inspired You to Write Your Book?
The inspiration came during a Sunday morning service. The minister was preaching about how you can be forgiven for your sins in Heaven but you still have to pay the price here on earth. That’s what gave me the idea of that for some acts there is no redemption.

How Did You Come up With Your Characters?
Red Dog Saloon was inspired by a real-life country tavern of ill-repute that was in my county when I was growing up. The characters were inspired by law enforcement officers I met in my hometown during my career as crime and courts reporter.

Author Bio:
R.D. Sherrill is an award winning journalist who has served as crime and courts reporter with the Southern Standard newspaper in McMinnville for the past 24 years. While by-lining several thousand real-life crime stories over his career, Red Dog Saloon, inspired by a honkytonk of ill-repute in his hometown, was his first foray into fiction. Since its release late last year, Red Dog has sold on five continents and has been met with overwhelming five-star reviews. The twisting tale is a nominee for the Silver Falcone Award at the upcoming Killer Nashville Conference. His second book, Average Joe, is hot off the press and has also been critically acclaimed. A tale of five regular guys who conspire to rob their hometown, Average Joe captures the essence of small town life and examines the often blurred gray line between good and evil.
Sherrill’s experience in writing real-life crime dramas helps him bring his characters to life in his fictional works while his motto of “all thriller, no filler,” ensures readers will stay up deep into the night to find out what happens next.

Sign up for our newsletter to find out about great mystery books. Once a month one subscriber will win one book from our site.
Filed Under: Crime Fiction Tagged With: murder, mystery, R.D. Sherrill, Red Dog Saloon, revenge, small town, suspense, tavern, thriller, twisting