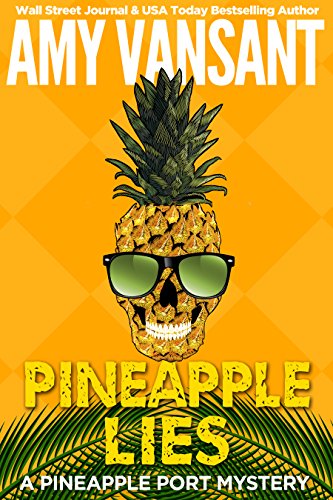 Growing up in one of Florida’s fifty-five plus communities, Charlotte never expected life to be wild. Golf cart racing with her surrogate mothers Mariska and Darla was about as nutty as life got…until she found the hot pawnbroker’s mom buried in her backyard.
Talk about making a lousy first impression.
Armed with nothing but her wits, Pineapple Port’s questionable cast of characters and a growing crush, Charlotte is determined to solve the mystery of Declan’s mother’s murder.
Hey, at least this guy’s skeletons aren’t in his closet.

What Inspired You to Write Your Book?
The book is based on a fictionalized version of my mother-in-law's neighborhood. Those people are living the dream and they're all nuts in the most wonderful ways, for instance…she insisted I name her character Mariska.

How Did You Come up With Your Characters?
My characters almost always start with someone I know and I add to them whatever quirks I need to to make the story work. Sometimes they're just real characters I heard about, like the old man who pretends a hair dryer is a speed gun to slow people down in Pineapple Port.

Book Sample
Charlotte’s spade struck a large stone and she removed it, tossing it toward the pile of broken concrete. A scratching noise caught her attention and she looked up to find her neighbor’s Cairn terrier, Katie, furiously digging beside her. Part of the fence had been broken or chewed, and stocky little Katie visited whenever life in her own backyard became too tedious.
“Katie, you’re making a mess!” Charlotte said, watching the dirt fly. “If you want to help, pick up stones and move them out of the garden.”
Katie stopped digging long enough to stare with her large brown eyes. At least Charlotte thought the dog was staring at her. She had a lazy eye that made it difficult to tell.
“Move the rocks,” Charlotte repeated, demonstrating the process with her spade. “Stop making a mess or I’ll let Abby out and then you’ll be in trouble.”
Katie ignored her and resumed digging, sand arcing behind her, piling against the fence.
“You better watch it, missy, or the next item on the list will be to fix the fence.”
Katie eyeballed her again, her crooked bottom teeth jutting from her mouth. She looked like a furry can opener.
“Fix your face.”
Katie snorted a spray of snot and returned to digging.
Charlotte removed several bits of concrete and then shifted her kneepad a few feet closer to Katie. She saw a flash of white and felt something settle against her hand. Katie sat beside her, tail wagging, tongue lolling from the left side of her mouth. Between the dog and her hand sat the prize Katie had been so determined to unearth.
Charlotte froze, one word repeating in her mind, picking up pace until it was an unintelligible crescendo of nonsense.
Skull. Skull skull skullskullskullskuuuuulllll…
She blinked, certain that when she opened her eyes the object would have taken its proper shape as a rock or pile of sand.
Nope.
The eye sockets stared back at her.
Hi. Nice to meet you. I’m human skull. What’s up, girl?
The lower jaw was missing. The cranium was nearly as large as Katie and a similar off-white color, though the skull had better teeth.
Charlotte realized the forehead of this boney intruder rested against her pinky. She whipped her hand away. The skull rocked toward her, as if in pursuit, and she scrambled back as it rolled in her direction, slow and relentless as a movie mummy. Katie ran after the skull and pounced on it, stopping its progress.
Charlotte put her hand on her chest, breathing heavily.
“Thank you.”
Her brain raced to process the meaning of a human head in her backyard.
It has to be a joke…maybe some weird dog toy…
Charlotte gently tapped the skull with her shovel. It didn’t feel like cloth or rawhide. It made a sharp-yet-thuddy noise, just the sort of sound she suspected a human skull might make. If she had to compare the tone to something, it would be the sound of a girl about to freak out, tapping a metal shovel on a human skull.
“Oh, Katie. What did you find?”
The question increased Katie’s rate of tail wag. She yipped and ran back to the hole she’d dug, retrieving the lower jaw.
“Oh no… Stop that! You sick little—”
Katie stood, human jawbone clenched in her teeth, tail wagging so furiously that Charlotte thought she might lift off like a chubby little helicopter. The terrier spun and skittered through the fence back to her own yard, dragging her prize in tow. The jawbone stuck in the fence for a moment, but Katie wrestled it through and disappeared into her yard.
“Katie no!” said Charlotte, reaching toward the retreating dog. “Katie! I’m pretty sure that has to stay with the head!”
She leaned forward and nearly touched the jawless skull before yanking away her hand.
Whose head is in my garden?
She felt her eyes grew wider, like pancake batter poured in a pan.
Hold the phone.
Heads usually come attached to bodies.
Were there more bones?
What was worse? Finding a whole skeleton or finding only a head?
Charlotte hoped the rest of the body lay nearby, and then shook her head at the oddity of the wish.
She glanced around her plot of dirt and realized she might be kneeling in a whole graveyard. More bones. More heads. She scrambled to her feet and dropped her shovel.
Charlotte glanced at her house, back to where her chalkboard wall patiently waited.
She really needed some chalk.

Author Bio:
Amy has been writing and finding other creative ways to make no money since high school.
She specializes in fun, comedic reads about accident prone, easily distracted women with questionable taste in men. So, autobiographies, mostly.

Amy is the former East Coast Editor of SURFER Magazine but the urge to drive up and down the coast interviewing surfers has long since left her. Currently, she is a nerd and Labradoodle mommy who works at home with her goofy husband.

She loves interacting with fans when the dog isn't laying on top of her, so stop by her blog or Twitter and say hi!

Sign up for our newsletter to find out about great mystery books. Once a month one subscriber will win one book from our site.
Filed Under: Romantic Mystery Tagged With: cozy mystery, funny, humor, mystery, romantic comedy, sweet mystery, woman sleuths