END_OF_DOCUMENT_TOKEN_TO_BE_REPLACED

About The End by Denise Moncrief

Almost a year after her husband dies, Ellie Marston opens the file for Tab’s unfinished manuscript, a thriller so compelling it reads like a true story. When Ellie adds the final chapter, it starts a chain of events that put her life in danger. When she turns to Det. Paul Santiago for help, they discover that not only is Tab’s story true, it is the key to exposing a conspiracy.

END_OF_DOCUMENT_TOKEN_TO_BE_REPLACED 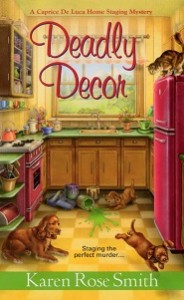 Quiet Kismet, Pennsylvania, may look like any other small town, but as a home stager, Caprice De Luca can see behind closed doors–and it seems someone has designs on murder. . .Life is a full house for Caprice these days. She’s dating, she’s rescuing adorable cocker spaniels, and she’s decorating the roomy interiors of Kismet’s most well-heeled residents with fun fantasy themes. But she’s worried about her pregnant sister. Bella’s marriage is coming apart like a bad wallpaper job, and to make matters worse, she’s decided to meet up with a former flame Bob Preston, a house painter Caprice frequently employs. When he’s found dead in a pool of green paint swirling with blood, it’s time for Caprice to stage an investigation. With all eyes trained on Bella’s husband, Caprice shifts her attention from finding the perfect curtains to finding the perfect culprit. . .

Catch up with Caprice’s adventures in STAGED TO DEATH, Book 1 of the Caprice De Luca home staging mystery series.
Book 3 GILT BY ASSOCIATION will be available in February 2015

What Inspired You to Write Your Book?
Since this is book 2 in the Caprice De Luca Home-staging series, I wanted to continue Caprice’s interest in solving crimes, staging houses and taking in stray animals. I also wanted to resolve Caprice’s sister’s family problems.

END_OF_DOCUMENT_TOKEN_TO_BE_REPLACED 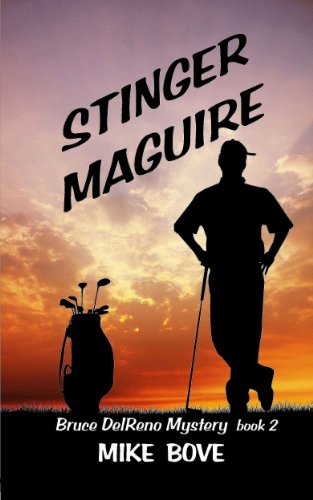 Taryn Maguire was good at hitting the shot called a stinger, good enough to get on the PGA Tour.
Taryn was called “Stinger.” He was a top golfer and known as a humanitarian.
He was brutally murdered after returning to his hometown, Willowtree, Arizona, for a charity event.
Bruce DelReno, a retired postman and golf enthusiast, found the body and becomes emotionally involved in the murder investigation.
With his friends, including Ben Samuel, his Apache sidekick, he uncovers secrets long held by people in Willowtree.
When Stinger’s own secret is discovered it becomes a bigger story than his death.
Fans of “Willowtree,” the first Bruce DelReno Mystery, will find more of Bruce’s unique relationships with friends, the police, witnesses, and suspects.
And, of course, more of his dry humor, and love of his wife, dog, food, and golf.

What Inspired You to Write Your Book?
The second of my Bruce DelReno Series, this book continues the adventures of a senor sleuth and his friends. Aside from the mystery and its resolution, this story deals with a major concern of our society, heightened in recent sports news. That underlying theme is a simple commentary on our society. To name it here would be a spoiler.

END_OF_DOCUMENT_TOKEN_TO_BE_REPLACED 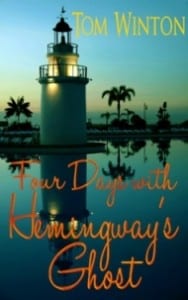 Four Days with Hemingway’s Ghost is not a story of spooks and goblins. It’s a powerful story about two men from two very different times. One man is mortal, the other is immortal. One is painfully ordinary, the other world famous.

Jack Phelan is a forty-two-year-old underachiever who lives in South Florida. Although he mows lawns for a living, he’s not what you might expect. He’s got an exceptionally sharp mind and is a self-educated Hemingway aficionado.

After Jack gets into an unlikely accident he’s flown by helicopter to the nearest hospital, where he remains in a coma for four days. But somehow, minutes after he blacks out, he finds himself in Key West, Florida–rubbing shoulders with an aged Ernest Hemingway.

Hem has been sent back down to help determine whether or not Jack has what it takes to write a book for “The Main Man above the clouds.” But what Ernest doesn’t know is that the book is to be about him. And that its purpose is to change the world’s perception of the swaggering, hard-knuckled, macho myth he has become.

Over the next four days, Jack Phelan and Ernest Hemingway travel to the legendary author’s old haunts and meet up with many of his long gone friends. Some of these reunions are rollicking good times, others are highly emotional tests of strength. But wait. When their time together comes to an end, the story is still not over. That’s when things really get interesting.

Tom Winton was born and raised in New York City. During his working career he has done everything from working on a railroad gang in the Colorado Rockies to driving a taxicab in Manhattan. He has also been a mailman, a salesman, an entrepreneur and more. He lives in Hobe Sound, Florida, with his wife Blanche and their ill-tempered, but loveable, Jack Russell terrier, Ginger. They spend part of their time in Carmel, Maine. Tom’s debut novel, Beyond Nostalgia, was released in February of 2011. This book has more than once been likened to such classics as Catcher in the Rye and To Kill a Mockingbird. Praised as “a 20th century Gone with the Wind,” Beyond Nostalgia has been on four different Amazon Bestseller lists. Mr. Winton’s second novel, The Last American Martyr, came out in August of 2011. It has been on six Bestseller lists, at the same time.