You are here: Home / Cozy / Once Upon a Trailer Park by Maggie Pill 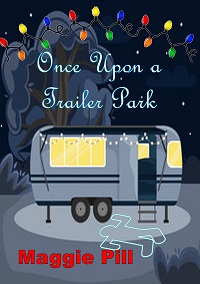 How Did You Come up With Your Characters?
Any writer's characters are a teaspoon of people they know and a cupful of imagination. I asked married couples to give me specific instances of where they disagree, and the result was a range of relationships in my fictional RV park. The couples who do everything together. The couple that embarrasses their friends by fighting in public. The couple that disagrees on whether their belongings should be in plain sight and accessible or put away to make a neat home. All the little frictions are here…plus a murder, which in most groups brings out gossip and speculation.

Coffee mug in hand, I came outside and reached for my first cigarette of the day. “What time did you get up?” I asked my husband softly.
“Four.” Al had already lowered the bamboo shades on either side of the porch and turned on the kerosene heater to chase away the morning chill. Three butts in the ashtray I’d emptied last night served as evidence he’d been there a while. “Hips got to aching,” he told me. “Couldn’t stay in bed any longer.”
Setting my mug down, I took my usual place at the table, facing the street four feet below. Al stood at the rail, leaning his weight on his elbows to lessen the strain on his lower joints. For some minutes we were quiet, sipping from our mugs and enjoying the silence. From time to time Al coughed a little, but it wasn’t bad, so we weren’t disturbing anyone. Not many in the park get up as early as we do. Sitting outside before even the birds wake up makes the place seem like ours alone, not a rented rectangle in the middle of three hundred exactly like it.
Looking to the east, I saw only darkness. Being December, it would be a couple of hours before the first glint of sunlight appeared on the horizon. For now, the available light was a battery-operated lantern on the table and a security lamp at the corner four lots down.
Despite his many ailments, Al’s eyes are sharp. “There’s something in the road down there.” Rising to look, I saw nothing at first. “See the lump at the edge of the Martins’ lawn?” As I peered harder he added, “Between the palm tree and the Ohio State banner.”
“There might be something.” I descended to street level, my flip-flops making soft plops with each step, and walked toward the spot, head thrust forward. “Yeah, there’s…”
After a few seconds Al said softly, “What?”
“Have you got your phone? We need to call 9-1-1.”

Author Bio:
Maggie Pill lives in Michigan with her husband of many years and an ancient but still sharp-as-a-tack cat. Maggie is the younger, cooler version of author Peg Herring, who writes more traditional mysteries.

Sign up for our newsletter to find out about great mystery books. Once a month one subscriber will win one book from our site.
Filed Under: Cozy Tagged With: Christmas, cozy, dog, Florida RV park, funny crime novel, humorous mysteries, Maggie Pill, mature sleuths, murder, spouse gripes