You are here: Home / Action & Adventure / Nocturnal Meetings of the Misplaced by R.J. Garcia 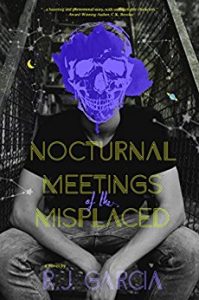 Mystery surrounds the town of Summertime, Indiana, where fifteen-year-old Tommy Walker and his little sister are sent to live with relatives they’ve never met. Tommy soon makes friends with Finn Wilds, a rebellious local
Finn invites Tommy to late night meetings in the woods, where Tommy gets to know two girls. He forms a special and unique connection with both girls. The meetings become a place where the kids, who don’t fit in at school, or home can finally belong. As the group of friends begin to unravel clues to a cold case murder and kidnapping— they learn the truth is darker and closer than they ever imagined. Even if they live to tell, will anyone believe them?

What Inspired You to Write Your Book?
An interest in cold case murder and foster kids I worked with it as a social worker were my inspiration.

How Did You Come up With Your Characters?
Some of the characters were composites of people I knew or know.

Book Sample
“The stars’ hard, distant points shined as the only witness. Trees and darkness seemed to go on forever. The woman’s muscles ached. She had endured hours on the highway in a trunk with her two-year-old daughter. It had been like being in the womb with her child. Yet the stale air and heat had sucked every drop of moisture and energy from her cells.
Now she had been given this small chance. Exhausted, or not, she ran. Her heavy feet stumbled over rocks that shot up like furious teeth. The lady kept running, tripping through foliage and brush, scratched up by merciless branches. Sloshing through sloppy pathways, her boots dragged earth and twigs along the way, but she never fell. She couldn’t. She was holding her daughter to her chest, shielding her from everything.
All her nerves tingled as her entire system went into overdrive. The too-familiar trees began to spin, and her knees gave out. Finally, out of sheer fatigue, she stopped and stumbled backward on the uneven ground. Her breath came out loud and fast, diminishing into a whimper. She dug her boots in the mud, rooting herself in the spot. With tired arms, she carefully set her daughter down and attempted to balance herself.
“Mama,” a little, frantic voice squeaked.
The lady’s eyes focused on that small face beaming up at her. Her shaky fingers caressed her daughter’s curls, crisp with tears and sweat. The buzz of nerves and breeze hummed through her body. Her mind blazed with one thought. “I’ll do anything to keep you safe,” she promised.
Crunching footsteps descended and her daughter looked up as her palm flew to her mouth. He was back.
My mom sat cross-legged on the floor, close, but not so close that we were touching.
“Well, Tommy, you’re only eight so you might not get it,” she said and closed the notebook; a broken pencil marked her page.
We were at a studio apartment next to the L Station. The apartment vibrated and rumbled as a train went by. I bristled at the ear-piercing sound.
“You’ll get used to the trains. This is a great apartment,” she said, running her fingers over the synthetic fibers. “You don’t even need furniture when the floors are carpeted. And this is new carpet, too. It’s like a luxury. It’s a bed and a couch.”
I was still thinking about the story. “So, what happens to the lady?”
The question brought a strange gleam my mom’s eye. She was really thinking it over. “I don’t know, yet.”
“Could you read me a real story?” I asked.
“No. I just have this one.” She took out her funny cigarette, the ones that calmed her, and started smoking. “We’ll go to the library soon.”
“In your story, you could make the lady and girl get abducted by aliens,” I said. “Or find another world in the tree.”
Her face broke into a smile, eyes tipping before the corners of her mouth began their slow climb. People would always tell me that I had her smile. “Hmm. Those are good ideas. You’re smart,” she said.
My mother’s image slowly faded out.
I woke up, still sprawled out on Izzy’s floor. And I remembered now, my mom never finished the story. She would rewrite that page and reread it to me every year or so. It was the same old worn-out opening. It didn’t mean anything. Only now the dream left me feeling more than a little messed up inside.

Author Bio:
R.J. Garcia is a wife, and proud mom of two smart kids. She earned her MSW and worked with foster children and as a school social worker. Writing has been her other great love. She has published several non-fiction pieces. She has been writing short stories for as long as she can remember. To her amazement, those short stories became novels!

Sign up for our newsletter to find out about great mystery books. Once a month one subscriber will win one book from our site.
Filed Under: Action & Adventure Tagged With: #coldcase, #meddlingkids, #R.J.Garcia, murder, mystery, suspense