You are here: Home / Mystery Books / Mystery and Misadventure by M.D. Hall 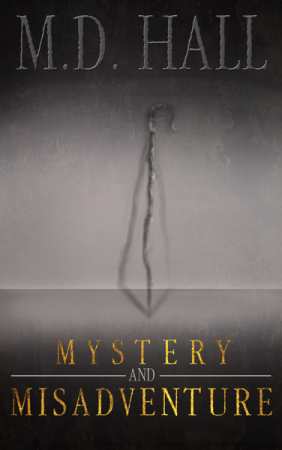 The first in a series of three collections of short stories (the third is ready and will be published on Amazon early in 2021). They are supernatural mysteries and all involve an old man, Samuel Prite. As the books progress, we revisit some characters and discover a story arc which is fully developed in a novel appearing on Amazon in Spring 2021. The arc is also brought to the fore in the fourth collection to be published at the end of 2021.

Targeted Age Group:: 11 and above

What Inspired You to Write Your Book?
Partway through a historical novel (now finished and to be published on Amazon in 2021), I was given a parking ticket. While waiting at the dentist, the idea came to me: the response of an overzealous traffic warden to receiving lots of unfairly issued parking tickets? You will spot the link in the first story.
I needed a mysterious supernatural character who is both charming and unthreatening: Samuel Prite. When I gave him free rein, he took on a life of his own.

How Did You Come up With Your Characters?
Samuel was just there. He neither looks nor sounds like anyone I know. The other characters are inspired by the people I have met in my journey through life, although none are recognisable.

Book Sample
An hour later, he was in his office when the phone rang. A cautious man, he never answered the phone – why take the risk? It could be a tenant.
‘It’s the police for you, Mr Crabtree.’ Amanda, his very blond, pneumatic secretary, emphasised his name with a breathy whisper, then pouted.
Henry mouthed, ‘Do they know I’m here?’
‘Mr Crabtree’s asking, do you know he’s here …? Now you do? Mr Crabtree …’
Henry sighed and, shaking his head, took the proffered receiver. ‘How can I help you, Officer…?

Author Bio:
I have always loved telling stories. First to my brother when we were children in bed. Then to my daughter. Once when on holiday in Minorca (she was four) we were sitting around the hotel swimming pool and I was telling her some of my stories. My wife nudged me after about ten minutes and pointed behind us. There, sitting cross-legged in a group of around twenty, were children listening silently to my stories. For the remaining three days of our holiday, the pattern repeated with parents thanking my wife – not me – for giving them an hour of peace in the afternoon.
Now, our oldest grandson – his brother is still a baby – hears the same and different tales.
Fifteen years ago, while on holiday in France, I decided, not to write down my children's tales – as prompted by my wife and daughter – but turn the tap and let all the stories pour out.

Sign up for our newsletter to find out about great mystery books. Once a month one subscriber will win one book from our site.
Filed Under: Mystery Books Tagged With: MD Hall