You are here: Home / Mystery/Suspense/Thriller Series / My Sister’s Detective by T.J. Jones 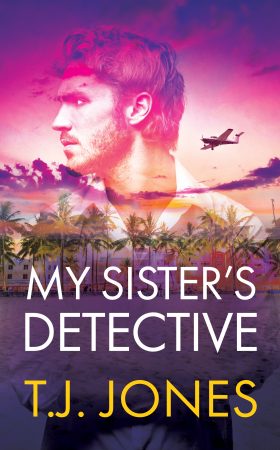 Eric Slater returns from the Navy to learn that an old friend may have been murdered. Angela Jeffries, the woman he’s always wanted, asks him to investigate, and her younger sister, Maggie, wants to help. Romance ensues. The pair follow a trail of clues to Miami, clues that may incriminate their dead friend in a heinous crime. As their feelings grow and the mystery deepens, they return home to some unexpected revelations and a mind-blowing conclusion.

What Inspired You to Write Your Book?
I wanted to write an entertaining story about two engaging people. Also, I wanted it to say something. Many of the characters in the book are flawed, but there is usually an underlying reason, which is eventually revealed. Do they deserve empathy? That's the question I leave up to the reader.

How Did You Come up With Your Characters?
Many of the detectives I read feature super-heroes, that are always tougher and smarter than their foes. Eric Slater is human, flawed and sometimes clueless. Luckily, he has found the perfect partner in Maggie Jeffries, they work well together. The two main character's are totally fictitious, while some of the others are an amalgamation of people I have known.

Book Sample
As a kid I had missed Davey's need for understanding, or took it for granted because I didn't have the same needs. I always had that lucky kind of uncertainty that comes from a life unexamined, and I had expected that same ignorance from the people around me. Davey had written that I was the lucky one, and he was right, if for the wrong reason. He had showed me what empathy was, and what love and friendship meant. That was what made me the lucky one.

Author Bio:
T.J.Jones is a Minnesota based writer with a growing number of titles in the Fantasy and Mystery genres, featuring diverse characters, contemporary challenges, and happy endings.

Sign up for our newsletter to find out about great mystery books. Once a month one subscriber will win one book from our site.
Filed Under: Mystery/Suspense/Thriller Series Tagged With: Child Trafficking, mystery, romance, romantic suspense, T.J.Jones, thriller