You are here: Home / Action & Adventure / Murder By Dissent by Patricia M. Muhammad 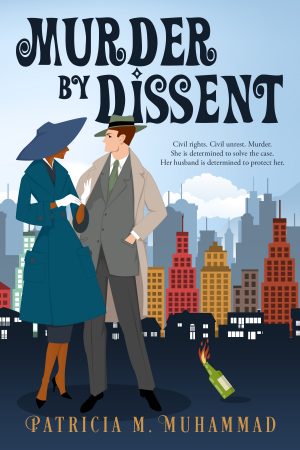 Protests, riots and someone who hides under the flame that scorches the possibility of improving race relations in America during the Civil Rights era. Jacqueline Sadie Thompson is a detective in a coloured precinct in New York. Lieutenant Davidson assigns her and Johnson murder cases which occurred during protests. They visit the scene. Someone tosses a Molotov cocktail where they stand. The building collapses. Thompson’s British husband, William rescues her. Her partner suffers a coma. Johnson awakens. He recalls the disturbing notions his wife had concerning racial identity. Thompson faints at the station house and is put on leave. Her husband cares for her. Anderson, another detective, furthers their investigations. Johnson convinces one of his cousins to retrieve a book. The detective is aloof and does not disclose to anyone what he saw before the explosion. Jacqueline deduces a portion of it. Jacqueline is determined to solve the case. Her husband is determined to protect her. Who do they both need protection from?

Mild note: The protagonist and her husband share intimate moments-often. Although there is only mention of legs, arms, embraces and kisses, the remaining descriptions I use allegory and references to nature to describe their intimacy. This may be considered mild to moderately “Steamy” depending on the potential reader’s inclination.

Moderate to severe discretion (abridged): This book is a work of fiction. However, the author intended to create characters and settings historically accurate to the era it takes place in, the racially tumultuous 1960s. Certain terms used as racial descriptions now considered archaic, outdated or even offensive are used to reflect the past usage by both black and white Americans of that era.

Additional note: A portion of the main plot revolves a pivotal scene in which a few people are injured due to an explosion which destroys a building. This notice is to advise those who may suffer from post-traumatic stress disorder (“PTSD”) concerning traumatic events based the recollection of certain sounds or the imagery which may encompass them both.

What Inspired You to Write Your Book?
I wanted to give mystery/detective romance fiction another try after completing my debut mystery romance novel, The Speakeasy Murders. It also centers around an interracial relationship. So we step from the 1920s into another tumultuous era, the 1960s.

How Did You Come up With Your Characters?
I try to think of names first, beginning with the protagonist. The main character is like the center circle and from how she interacts with her environment and other characters, I get a glimpse of how I would like to develop her and the others' personalities.

Book Sample
“Your confidence in me is a lot of pressure to withstand.” She breathed deliberately a few times. “Sebastian…” She held either side of her upper arms with the opposite hand. How could she consider this a part of her investigation when she only wished for William to be present and hold her. Mark observed her. Whatever she needed to do, however, Thompson felt, he would not scold her. In his estimation, it may be even better. The true human being can sense the genuine nature of another. Sebastian was only unconscious. He was not dead. Mark forced a pleasant smile and encouraged Jacqueline with one nod. She was able to continue. “I am so sorry that this happened to you…but we will resolve it—all of the matters.” Johnson's hands did not move; none of his body did. “Iven was able to convince Mark to help.” Jacqueline looked at her fellow detective. He smiled though he was slightly offended. He knew what many others of the precinct thought of his temperament. In some ways, he was the opposite of Jacqueline, but he respected her for being herself just as much as he maintained who he was despite the criticism. Jacqueline thought she saw Johnson's right index finger move. She withheld her observation. McKenzie wanted for his fellow detective to be hopeful; so there it was. “We will work each day as much as we can…The precinct needs you. You may even still be able to assist us—but you can only do this if you return to us.” Still nothing more. Mark Looked away and approached the window. He did not want for his colleague to sense his dwindling hope. It would only further dishearten Jacqueline. She poked the fleshy part of her arm and looked at the uninviting drop ceiling. Her thoughts were in an obvious flurry. She swallowed to combat the welling of tears she assumed were to gush forth any moment. Thompson squeezed her eyes hut. She looked across the room. McKenzie had become disengaged. He was to only help; that is what she just told Sebastian. It was for her to lead, even in this impromptu hospital visit. Jacqueline eyed a stool with metal legs and placed it next to Johnson's bed. “I heard what happened to Margaret. She is dead. “Two seconds later, Sebastian flipped his head forward and sat up with wide eyes. He did not blink. His hands splayed against the cover. Mark jumped. The machines monitoring Johnson's vitals began to beep. Johnson yanked the i.v. needle from his left hand. Other than this he just sat there. Jacqueline leaped backwards from her stool, toppling it. The three metal legs hit the floor loudly until they rested against a wall. Thompson kept the back of her arm where she had thrust herself—against the wall to Sebastian's right. Mark ran over to her. She pointed. Sebastian finally blinked. Nurses rushed in after they heard the commotion. Jacqueline would not move. McKenzie stood in between her and Johnson in an attempt to block her view—but she had already seen. The detective saw plenty. A physician finally entered after the two nurses.

Author Bio:
Patricia M. Muhammad is an American fiction author of crossover contemporary romance/science fiction, science fiction/fantasy, mystery and historical romance genres. She has currently written 20 novels. She is currently working on her next book manuscript. Before penning fiction, Patricia emerged as an international legal history scholar and academic author, focusing on human rights, international law and restorative justice. She has currently written and published a combination of 22 research papers and academic book reviews in these subject areas. Her work has appeared in the American University International Law Review, Columbia Journal of Race and Law, the Willamette Journal of International Law and Public Policy as well as the New York History Journal. Her non-fiction writing has been cited dozens of times in various respectable academic journals.

Sign up for our newsletter to find out about great mystery books. Once a month one subscriber will win one book from our site.
Filed Under: Action & Adventure Tagged With: 1960s, Amazon, interracial relationships, Murder By Dissent, mystery books for adults, mystery detective romance novels, mystery reads, Patricia M. Muhammad, pmmuhammadbooks, YouTube