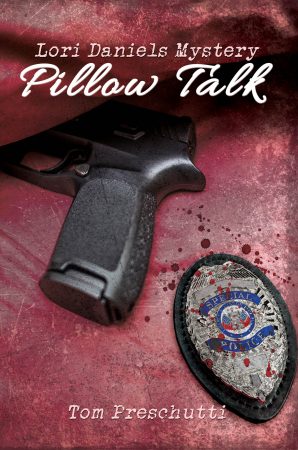 RATED 4 OUT OF 5 STARS ON GOODREADS BY READERS
Police Detective Lori Daniels has a knack for picking the wrong guy as a lover. This complicates her assignment on a task force established to end drug trafficking in the city.
One former lover from high school is now the front man for a major illegal drug distributor. Another former lover is the captain of the Police Internal Affairs Division, who vows to have Lori kicked off the police force, even if it means framing her as a gang informant. Her present lover is the hot shot detective from another precinct who is super successful in bringing down the drug gangs and has a super ego to match.
Strategies devised by the State Police, City Police, Internal Affairs, and a Drug Gang, including using moles and informants, all go haywire. In the end, the trust between friends, along with steady and reliable police work, regarding the death of a female police officer, leads to the capture of a major drug lord.
The book combines the wit and charm of characters in an O’Henry tale with the suspense and twists of a M. Night Shyamalan plot to take the reader on an exciting journey, while leaving a craving for more.

What Inspired You to Write Your Book?
Pulp fiction about detectives is my favorite reading material. Also, I have met talented, successful, single women who talk about falling in love with someone who turns out to be mister wrong.
These two factors gave me the twist for my mystery series.

How Did You Come up With Your Characters?
Lori Daniels is based on a friend of mine, who, admittedly, dated several mister wrongs.
Some of the other characters are fashioned after people I have met socially or professionally.
The rest are amalgams of characters in other books, movies and television.

Book Sample
At a small table in the coffee shop, they speak to Latisha Hendricks first. A medium height Caucasian girl in her late teens with a dragon tattoo at her neck and a nose ring. “Well, she is a very nice cop. Always courteous and always puts her change in the tip cup. Is she in trouble for somethin’?” Latisha asks.
“She’s dead. It was in the news. She was tortured and beaten to death. Then her body was thrown into the river,” Tate responds matter-of-factly.
The bluntness of his statement had the effect on Latisha that Tate wanted. Wide-eyed, she says, “Oh my god! That’s horrible! Who could have done that!”
“That is what we are hoping you can help us with,” O’Reilly answers.
Starting to tear up, because of the shock, Latisha says, “Me? What can I do?”
O’Reilly continues, “Tell us, did she ever meet anyone here.”
Latisha calms a bit, “Well, let me think. It was only once that I saw. This guy comes up to the counter and asks about Regina by name. It was after we had just opened at 6:00 AM. I told him that she usually shows up about 7:30. He said he’d be back.”
“Did the guy leave a name?” O’Reilly asks.
“Nope”
“What did this guy look like?”
“Well, let’s see, blond guy, tall, business type. Ya know the guy who looks like he has spent a lot of time at a desk. Starting to get soft. We get them in here all the time. ,” Latisha says.
“Any personal identifying characteristics,” Tate asks.
Latisha looks at Tate and mutters, “Huh?”
“Any tats, scars, maybe a lisp, anything we could use to identify him,” O’Reilly says as she secretly smirks at Tate. Tate, just a secretly, flips a middle finger at O’Reilly.
Latisha thinks for a few seconds then says, “Well, he had a coat and tie, he didn’t look at my boobs when he talked to me, most guys do, ya know,” she points at Tate, “like him, and he talked like his shit was ice cream.”
Trying not to laugh, O’Reilly leans towards Latisha asking, “How so? Like what did he do?”
“Well, using big words.” Latisha changes her voice to sound deeper and continues, “It is the utmost importance, Grave consequences, stuff like that.”
“What happened next?” O’Reilly asks.
“Well, a little later Regina comes in as usual. I tell her about mister softy. She seemed worried after that. Having coffee at the table she would keep looking up from her phone then back down to her phone then look up again…”
Tate interrupts and says impatiently, “Okay, okay she’s nervous. Then what?”
Latisha stops talking and gives Tate the “you talkin’ to me” look.
“George, get us some coffee, will ya please?” O’Reilly pleads.
Tate gets up from the table saying, “Yeah, Yeah,” and goes to the counter.
“Sorry about that, Latisha. Please, continue,” O’Reilly apologizes.
“You should find yourself a new partner. That man is rude.”
“Maybe so, but we’ve been partners so long he’s kind of like an old pet dog. He has accidents once in a while, but he listens well,” O’Reilly muses.
Latisha laughs, “I like you.”
“Thanks, now what about Regina?”
“Well, this guy shows up and sits down at Regina’s table without askin’. He shows her his badge…”
“He has a badge!??!” O’Reilly interrupts.
Latisha looks surprised, “Oh, yeah, I almost forgot. He had a badge.”
“Was it a city police badge?” O’Reilly asks.
“I guess so. He kept askin’ one question after another. Gettin’ up in my face. So I gave him some ‘tude” and told him to look it up on Wikipedia! That’s when he yanks it out. It was in one of those small wallet things. He flips it open to show me. One side has a badge. The other side has a license or something with his picture and big letters IAD on it,” Latisha replies.
“Would you recognize the man, if you saw him again?”
“Yep,” Latisha answers.
“So what happened next?” O’Reilly urges.
“Well, Regina looks scared. They talk a bit. Next thing I know the two of them are leavin’ together.”
“Together, you’re sure,” O’Reilly pushes.
“Yep, he held the door for her and they walked out and passed the window together,” Latisha explains.
“Is your manager here?” O’Reilly asks.
“What the heck! What’d I do!” Latisha says defensively.
“Oh, sorry, you did nothing wrong. In fact, you have been very helpful. Thank you. I notice the store has several surveillance cameras. I want to ask your manager if there is video of the day you saw the guy,” O’Reilly explains.
Latisha becomes more relaxed, “Am I really that helpful, wow!”
“Yes, you are. Is a manager here?”
Latisha smiling proudly says, “Yep, she’s here. I’ll get her for you.” She jumps up from the chair and hurries to the coffee counter. After speaking with a girl about her own age, Latisha returns. “She’ll be right over.”
Less than a minute later a woman in her early twenties sits at the table. She is African American, average height, dark hair with tight braids, “Hi, Latisha says you are a cop and you want to view videos from the surveillance.”
“That’s right. What’s your name?” O’Reilly says.
“Nancy, Nancy Cavanaugh, I’m sure it will be okay. We’ve done it before for the police. Come on back to the office, I’ll call the general manager,”
Tate comes back with the coffees. Sits at the table. Looks at Latisha and Nancy then at O’Reilly, “So, what’d I miss?” he asks.

Author Bio:
After working 34 years in the construction management industry, Tom Preschutti has started a new career, writing. He writes what he likes to read, romance mixed with mystery and suspense. His ambition to be a writer started in high school but was put on hold. Having a steady income for raising a family took precedence over everything else. He lived all his life in Pennsylvania and now lives in a rural area north of Philadelphia.

Sign up for our newsletter to find out about great mystery books. Once a month one subscriber will win one book from our site.
Filed Under: Action & Adventure